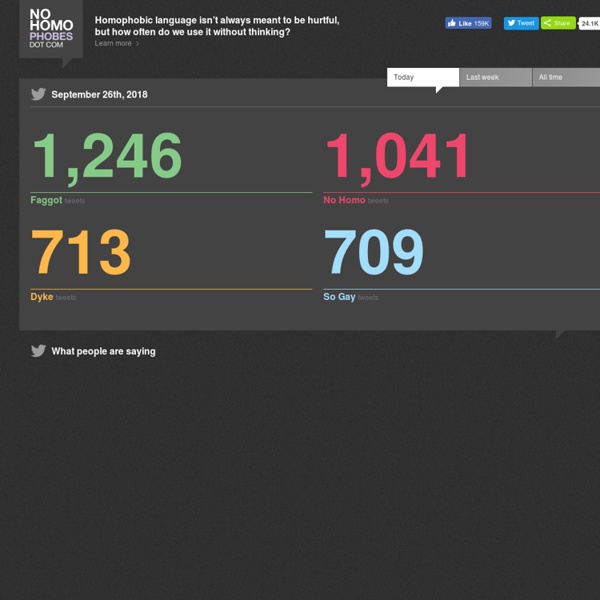 A Reflection On Grindr It was ever since I received the message: ‘I’m looking for a cute top’ followed by my reply, ‘Have you tried H&M?’ that I knew Grindr and I would always have a rocky relationship. I whole heartedly believe that sex between two men can be a beautiful thing, as well as an inspiration to watch. A Teen's Brave Response to "I'm Christian, Unless You're Gay" I received the following email today in response to my post I’m Christian, Unless You’re Gay. I had decided a couple months ago that it was time to let the whole thing rest, but this response was so powerful, I couldn’t not share it with you all. It was from a woman who simply called herself, “One proud mom.”

Black Gays Make Up Largest Share Of LGBT Community, Survey Shows Contrary to stereotypical images, which peg LGBT people as disproportionately white, male, urban and wealthy, a new survey shows that the LGBT community is actually largely African American. According to the report, released by Gallup earlier this week, 4.6 percent of African Americans responded "yes" when asked if they identify as lesbian, gay, bisexual, or transgender, along with four percent of Hispanics, 4.3 percent of Asians and 3.2 percent of Caucasians. "This data reveals that, relative to the general population, the LGBT population has a larger proportion of non-white people and clearly is not overly wealthy," said study author and demographer Gary Gates, of the UCLA School of Law's Williams Institute.

browse the front page of the internet Vizit A visualisation of the subcommunities of Reddit, with associations defined by the cross-posting (known as an 'xpost') of common content (link posts only). For example, if two subreddits both had links to a particular YouTube video posted to them, that would count as an association.This map was created from data on all the links posted to reddit between Thu, 23 Jun 2005 18:50:02 UTC and Thu, 28 Mar 2013 01:24:17 UTC, which was kindly provided by Reddit user Deimorz. The size of a subreddit on the map relates to the number of subscribers (as of June 29th 2013).

I'm Gay: The 50 Most Powerful Coming Outs of 2012 1. Andrew Ahn Filmmaker Andrew Ahn came out in grand, cinematic fashion. Too timid to tell his family himself, he made a short film, Dol, about a Korean-American man coming out to his own family, which was played by Ahn's own family. "I knew I wouldn’t be able to tell them, to say the words ‘I’m gay,' so I cast my family in the film, but never told them that it was about a gay Korean-American man. The filmmaking process both distracted from and prepared me for the inevitable – that I would eventually have to show my parents the finished film," Ahn said when Dol premiered at Sundance.

NBA player Jason Collins says he is gay - The Magazine "I'm a 34-year-old NBA center. I'm black. And I'm gay," says Jason Collins. Neil Patrick Harris & David Burtka cover Out Mag’s “Love Issue”: sexy & awesome? I’ve never been crazy about Neil Patrick Harris’s boyfriend/partner David Burtka. I adore Neil, and as such, I’ve accepted that David is in his life and hoped for the best. But David seems… I don’t know. I can’t put my finger on it. He’s like Jennifer Westfeldt, Jon Hamm’s girlfriend. I’m annoyed by them, but I can’t figure out if it’s just jealousy or because Westfeldt and Burtka are simply annoying people.

brave response to " I'm Christian, Unless You're GAY " - Adventist Online I received the following email today in response to my post I’m Christian, Unless You’re Gay. I had decided a couple months ago that it was time to let the whole thing rest, but this response was so powerful, I couldn’t not share it with you all. It was from a woman who simply called herself, “One proud mom.” Hello Mr. Pearce,I am the Christian mother of a 15 year old teenage boy and about a month ago he came home from school with a copy of your article “I’m Christian, unless you’re gay”.

Scientists claim that homosexuality is not genetic — but it arises in the womb I'm always curious to find out why anything is the way it is. The fact that it's biological just makes it even more interesting. Epigenetic research has shown that the environmental factors which affected your parents or even your grand parents can effect your chances of heart disease, obesity, cancer, even over all longevity. Learning more about it, and all of the ways it can affect us, is important. Couldn't agree more. I think the math models are supposed to be more important than the actual content, which makes about as much sense as an American magazine posting Kate Middleton on the cover and calling it News.

Kristen Wolfe: Dear Customer Who Stuck Up For His Little Brother You thought I didn't really notice. But I did. I wanted to high-five you. Yesterday I had a pair of brothers in my store. One was maybe between 15 and 17. He was a wrestler at the local high school. A Little Theory of Homophobia Heterosexuality in the U.S. is gendered: women are expected to attract, men are supposed to be attracted. Men want, women want to be wanted. Metaphorically, this is a predator/prey type relationship. Second Class Citizens A second class citizen is defined as: a person whose rights and opportunities are treated as less important than those of other people in the same society. There are many areas in which gays, lesbians, & bisexuals do not have the same rights & opportunities as others in society. We must change this now. I want to make a documentary that encompasses all areas in which we are discriminated against. The general population is not aware that discrimination against the gay community goes beyond marriage & bullying.

Pope Francis met with openly gay couple — and unlike Kim Davis, who ambushed him, he did so intentionally Pope Francis met with a gay couple the day before he met with same-sex marriage opponent Kim Davis, CNN’s Daniel Burke reports. Yayo Grassi and his partner, Iwan — old friends of the pope from Argentina — visited the pontiff and were greeted with warm hugs. In an interview with CNN, Grassi said that “three weeks before the trip, he called me on the phone and said he would love to give me a hug.” Unlike the publicity stunt manufactured by Kim Davis, her lawyers, and elements within the church hostile to Francis’ agenda, this meeting was both deliberate and purposive. Referring to the Vatican’s statement about Davis, in which Reverend Federico Lombardi said that “the only real audience granted by the Pope at the nunciature was with one of his former students and his family,” Grassi said “that was me.”

McGowan, Hilton, Banks Controversies: Are Gay Men Misogynistic? Usually portrayed—often simplistically—as ironclad, the bonds between gay men and straight women have been the focus of much debate lately. Actress Rose McGowan caused a stir last month when she described gay men as “as misogynistic as straight men, if not more so” and blasted gay men for not standing up more for women's rights. More recently, rapper Azealia Banks echoed McGowan's remarks as she reignited her Twitter feud with blogger Perez Hilton, once again calling him a “faggot,” all in the process of attempting to redefine the term as “any man that hates women.” While both women took flak for their remarks, it's too easy to dismiss their criticisms outright. McGowan is hardly alone in her belief that gay men are generally myopic about the rights of other oppressed groups.