London Lives 1690 to 1800 ~ Crime, Poverty and Social Policy in the Metropolis 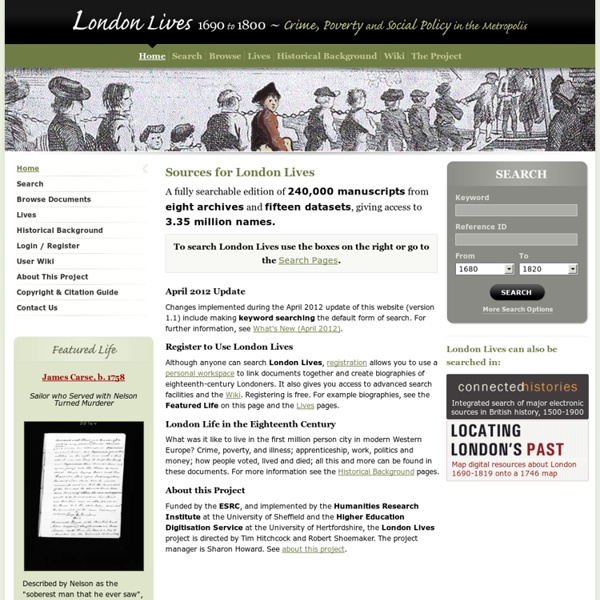 Human impact has pushed Earth into the Anthropocene, scientists say | Environment There is now compelling evidence to show that humanity’s impact on the Earth’s atmosphere, oceans and wildlife has pushed the world into a new geological epoch, according to a group of scientists. The question of whether humans’ combined environmental impact has tipped the planet into an “Anthropocene” – ending the current Holocene which began around 12,000 years ago – will be put to the geological body that formally approves such time divisions later this year. The new study provides one of the strongest cases yet that from the amount of concrete mankind uses in building to the amount of plastic rubbish dumped in the oceans, Earth has entered a new geological epoch. “We could be looking here at a stepchange from one world to another that justifies being called an epoch,” said Dr Colin Waters, principal geologist at the British Geological Survey and an author on the study published in Science on Thursday. “We [the public] are well aware of the climate discussions that are going on.

Old Bailey Online - The Proceedings of the Old Bailey, 1674-1913 - Central Criminal Court UCL Transcribe Bentham Welcome to Transcribe Bentham By Tim Causer, on 27 March 2013 Jeremy Bentham ‘Many hands make light work. Many hands together make merry work‘, wrote the philosopher and reformer, Jeremy Bentham (1748 – 1832) in 1793. This is an exciting opportunity to make a genuine difference to research and scholarship by contributing to the production of the new edition of The Collected Works of Jeremy Bentham, and to help create for posterity a vast digital repository of Bentham’s writings. Please consult the Transcribe Bentham FAQ for more details on taking part. You can also read more about Jeremy Bentham, his thought and his importance, and consult resources on deciphering historical handwriting. Find out more about the consortium behind Transcribe Bentham, and talks and publications by the project team. 17,000 pages transcribed… and counting! By Louise Seaward, on 7 November 2016 We’re here with happy news to lift those Monday blues! The more detailed progress chart is as follows: Hello everyone!

Stonewall riots The Stonewall Inn, taken September 1969. The sign in the window reads: "We homosexuals plead with our people to please help maintain peaceful and quiet conduct on the streets of the Village—Mattachine."[1] The Stonewall riots were a series of spontaneous, violent demonstrations by members of the gay community[note 1] against a police raid that took place in the early morning hours of June 28, 1969, at the Stonewall Inn, located in the Greenwich Village neighborhood of Manhattan, New York City. Very few establishments welcomed openly gay people in the 1950s and 1960s. After the Stonewall riots, gays and lesbians in New York City faced gender, race, class, and generational obstacles to becoming a cohesive community. Background[edit] Homosexuality in 20th-century United States[edit] Throughout the 1950s and 1960s, the Federal Bureau of Investigation (FBI) and police departments kept lists of known homosexuals, their favored establishments, and friends; the U.S. Homophile activism[edit]

Livery Companies - home The History of Sanitary Sewers Documenting the American South: Open DocSouth What is DocSouth Data? Doc South Data provides access to some of the Documenting The American South collections in formats that work well with common text mining and data analysis tools. Documenting the American South is one of the longest running digital publishing initiatives at the University of North Carolina. Doc South Data is an extension of this original goal and has been designed for researchers who want to use emerging technology to look for patterns across entire texts or compare patterns found in multiple texts. How do I use it? By clicking on one of the collection links below, your computer should begin downloading a .zip file containing the data for that collection. The Church in the Southern Black Community First-Person Narratives of the American South Library of Southern Literature North American Slave Narratives Most users will find the Data file to be most useful. The text-only.xsl file is the script that was used to create the folder. Feedback Your work drives our work.