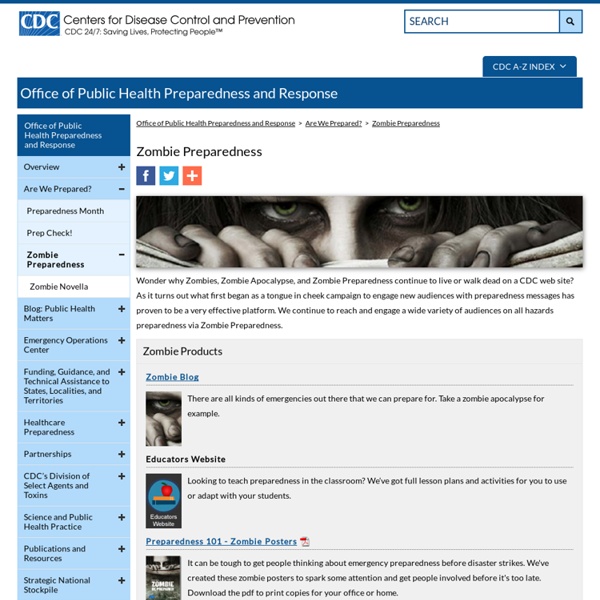 Zombie Blog There are all kinds of emergencies out there that we can prepare for. Take a zombie apocalypse for example. Educators Website Looking to teach preparedness in the classroom? We’ve got full lesson plans and activities for you to use or adapt with your students. Preparedness 101 - Zombie Posters( It can be tough to get people thinking about emergency preparedness before disaster strikes. Novella( Looking for an entertaining way to introduce emergency preparedness? Social Media/Online Check out our Zombie Social Media page where you can find badges and widgets for your own site, links to our blog, content syndication, and zombie e-cards.

ZDAY Survival Simulator HD The First Zombie-Proof House Somehow, ritual drunk-conversation concerning team captains for the apocalypse has become a major part of the lives of 20-somethings. Having been matured in the Grandaddy-crowned masterpiece film (put “A.M. 180” on and forget that you have a job) 28 Days Later and the best-selling Zombie Survival Guide, we’re all a little too ready to deal with the 2012 zombie apocalypse of our dreams. “The Safe House,” designed by KWK Promes, starts to get eerily close to something I could work with, if say 200 bludgeoned members of the undead army came over to eat their way into borrowing some sugar. “The most essential item for our clients was acquiring the feeling of maximum security,” begins the designers’ website in the summary of the structure. Who wouldn’t feel safe in a concrete rectangle that folds in upon itself to become completely sealed? The house, with its movable walls, has only one entrance, which is located on the second floor after crossing a drawbridge.

Survive The Zombie Apocalypse Well here we are—2012. End of the world time. Sucks, doesn’t it? 1. 2. 3. 5. 6. 7. 8. 9. MacGyver, Survivalist, or Stockpiler: The Urban Survival Skills Everyone Should Know It's your word against his.. If he ain't talkin, your word pretty much wins. Also, don't try draggin him back in your house after he's dead.. As soon as you're involved in a shooting like this, call the cops, then a lawyer.. You are so bad ass. Seriously, you're advocating shooting a potential burglar with your "Mossy, Remy or Mr. We're not all in middle school, you know, and life is not like a Die Hard movie. I don't want to kill anyone. I am not running from my house. You can be a moral coward and subject yourself to the will of a criminal, however I will suffer no such victimization. @jodark It's not cowardly to leave and certainly not morally cowardly to leave if there is an intruder in your house. Unless you were a soldier or a police officer, you have probably not faced a life or death situation, and frankly, you are likely not equipped to fight back adequately. But staying in your house just because you paid for it and everything in it?

What to Put in a Doomsday (or Disaster) Survival Kit While 2012 is an excuse, there's nothing wrong with being prepared. Just look at Katrina, and the devastation it wrought. My personal wake up call was in 1999 when our city got hit with an October heavy wet snow that basically rendered the entire city without power, sub freezing temps, and obviously no grocery stores open. Everything was liveable after about 72 hours when power was somewhat restored to areas, but our house was without heat for a week. If we had not have had a wood stove and a source of fire, we likely would have been in very bad shape. So now, in my pocket, I always carry: -A source of light (4Sevens Quark currently, or a Surefire E1e) -A blade (currently a Leatherman Squirt P4 and Skeletool) -A source of fire (Needs replaced - but a generic magnesium starter) With those three items, you might survive. -72 hours worth of (very) basic food (instant rice and packaged tun) -32oz of Water in a re-usable bottle -Another cup -5 mylar blankets -Zip ties -Paracord -Tinder

Decked Out: Zombie Apocalypse Unless you’ve been hibernating in your underground bunker for the last few weeks, you’re well aware that the zombie apocalypse is upon us (just like the Mayans predicted). We’re no suckers, we know there are a few steps we’ve got to take before any Walkers coming strolling into our neck of the woods. Besides settling on the ideal blunt object, we’ve got to have our attire in order. This is what we’re thinking. 1. Bug-Out Survival Best places in the U.S. to survive the apocalypse: Silohome Interested in uplifting stories on the natural world, sustainable communities, simple food, and new thinking on how to live well? Please enter a valid email address and try again! No thanks Bug Out Bags – The Ultimate Resource Guide What’s a Bug Out Bag? Most people who have a basic understanding of survival and preparedness understand the need for a good Bug Out Bag. It’s probably one of the most talked about items on survival websites and is something that has become a bit of an iconic symbol for preppers and survivalists. The basic idea behind a Bug Out Bag (BOB) is pretty simple. What items do you really need in your Bug Out Bag? There really is no One Size Fits All Bug Out Bag solution. Starting with a good plan is really the only way to get started. What are the most likely disaster situations you will face? Once you’ve thought about the above considerations, you can then start to pack your bag. Considerations to think about before packing your BOB: Who will be traveling with you? THE BIG 4 – Water, Shelter, Food, Protection In my opinion water, food, shelter and protection are the most important things that you can focus on. Hydration Considerations: Shelter Considerations:

34 Essential Items For Your Bug Out Bag Imagine the following scenario. You are awakened in the middle of the night by the jolt of a powerful earthquake. Your house is leveled, but thankfully you and your family are uninjured. However, the roads are impassable, your utilities have been cut off, and many of your neighbors were injured or killed in the earthquake. The only thing you have to survive is what you have on hand, and because you are a Frugal Dad reader, your bug out bag. Unfortunately, this was a very real scenario for the people of Haiti. What exactly is a bug out bag? A bug out bag is a collection of basic survival gear that might be required in a disaster scenario, natural or otherwise. The actual bag could be as simple as an extra frameless backpack or duffel bag, or as elaborate as a framed ALICE pack or similar framed backpack. What About Bugging In? In some cases, it might make sense to “bug in.” What goes in a bug out bag? A couple rations of food (I buy from MountainHouse.com).