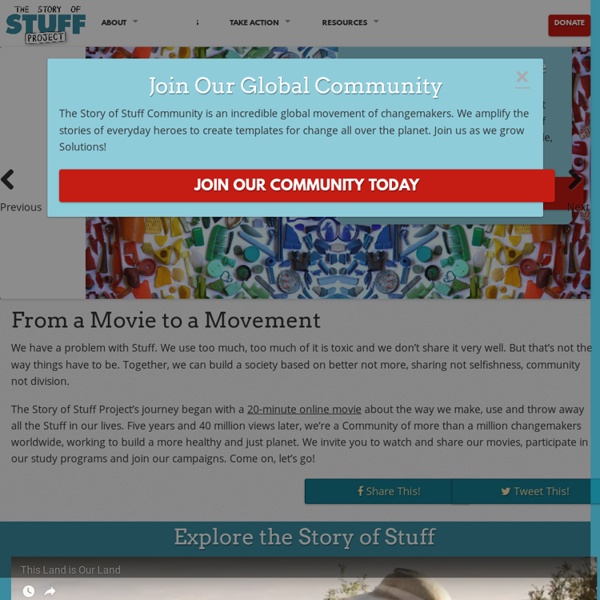 Join the Story We’re a community of problem solvers — parents, community leaders, teachers and students, people of faith, entrepreneurs, scientists and more — working to create a healthy and just world. Help us grow Solutions! Kids, Parents and Climate Annie sits with Lisa Hoyos, co-founder of Climate Parents, to discuss how parents can approach the tough topic of climate change with their kids and gear up to take action. What’s Your Type?

Free Word Cloud Generator Word clouds can be extremely useful for gaining insights into virtually any large body of text. They can be used to study such things as corporate reports, political speeches, historical documents, news reports, public opinions, tweets, and so forth. This particular word cloud generator is designed to be not only flexible and easy-to-use, but also to produce high-quality, visually appealing word cloud images.

Watch online ads and this startup will give money to charity Online ads have a seriously bad rap — banner ads are annoying and no one likes sitting through a video about diapers before tucking into a Saturday Night Live clip on YouTube. The recently launched Australian startup Make Some Change, founded by Michael Battle and Jesse Richardson, is proposing a different equation. Instead of being forced to watch a brand's message when you are not in the mood, you can visit the Make Some Change website and the company will donate cash to charity when you view ads on their site. To this end, the team have created a digital currency called Change coins, Battle and Richardson told Mashable Australia. Change coins are generated each time a piece of content is viewed, and the person who watched the clip can choose a charity on the site they'd like to donate it to. Unlike other digital currencies such as Bitcoin, the value of the Change coin is tied to the U.S. dollar.

Bag It The Movie Since Bag It's Since Bag It's premiere in 2010, over 2,500 festivals, nonprofits, theaters, churches and community organizations have hosted screenings of Bag It across the world! We invite you to host a screening in your community next. To order a public exhibition for schools or libraries, please be in touch with our Educational Distributor, New Day Films or click on the button below. Then, take a peek at our Bag It Screening Tool Kit for ideas about planning your event! Bag It invites you to make a difference in your community! Greenhouse gas benchmark reached For the first time since we began tracking carbon dioxide in the global atmosphere, the monthly global average concentration of this greenhouse gas surpassed 400 parts per million in March 2015, according to NOAA’s latest results. “It was only a matter of time that we would average 400 parts per million globally,” said Pieter Tans, lead scientist of NOAA’s Global Greenhouse Gas Reference Network. “We first reported 400 ppm when all of our Arctic sites reached that value in the spring of 2012.

5 Places to Find Web 2.0 Resources By Jim Forde I am web geek, and not just because I own a Foursquare t-shirt that I bought at a discount after my 1000th check in. The real reason I know I am a web geek is because I LOVE discovering cool web 2.0 tools that can enhance my classroom! 8 TEDtalks That Will Change Your Life Forever 1. Juan Enriquez: Will our kids be a different species? Juan asks in this compelling TEDtalk ‘can we upgrade ourselves?’ 14 TED talks on how the power of social entrepreneurship is helping solve the world’s biggest problems [Part 2] TED talks are highly addictive, moving, dramatic and inspire listeners to think, and sometimes act. We have curated a list of TED talks by a variety of high quality speakers who have had immense impact in the areas that they have chosen to be involved in. They have taken on the big problems facing the world at the moment including urban upheaval, illiteracy, environmental degradation and financial inclusion.

The Great Pacific Garbage Patch Resulting from several research missions, travelling across and above the GPGP, The Ocean Cleanup team compiled an unprecedented amount of data to better understand the plastic that persists in this region. Research Expeditions Scientists have been studying this area since the 1970's - usually by means of dragging a small sampling net through the debris. This method showed a bias towards smaller objects and did not provide much insight into the larger pieces, and, thus, the entire scope of the GPGP.

Renewable Energy This Living Lab offers you a chance to evaluate the renewable energy sources in the U.S. Renewable energy comes from natural resources such as wind, plant material, water (rain or tides), geothermal, or sunlight and is naturally replenished. Both renewable and non-renewable energy sources are used to generate electricity, power vehicles, and provide heating, cooling, and light. Renewable sources of energy vary widely in their cost-effectiveness and in their availability across the United States. Although water, wind, and other renewables may seem free, the cost comes in collecting and transporting the energy to the places where energy is needed. Top 100 Tools for Learning 2011 Centre for Learning & Performance Technologies The Toolbox Share your Top 10 Tools to help build the 2011 list This is the 5th annual Top 100 Tools for Learning list I have built based on the contributions of learning professionals worldwide.

Printouts Home › Classroom Resources › Printouts Go offline with this collection of our best printable sheets from assessments to organizers—all of them classroom-tested and easy to use. Graphic Organizers

Wow - I never thought of that. Could be a cool school project! Thanks dollyisnawan! by gormcc May 29

Yeah, and the most interesting part is, everyone can involve and contribute by subtitling it to their own language by dollyisnawan May 29

I've built many great English lessons from the material here - excellent additional resources (transcripts, etc.) to go with the films which are very well made. by gormcc May 1