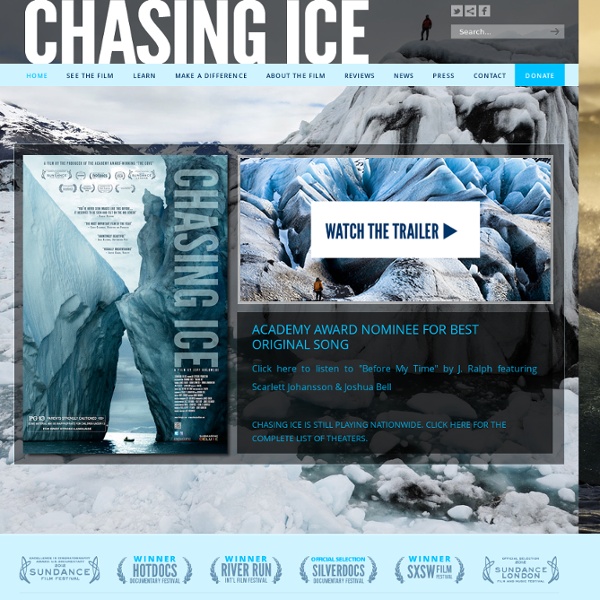 The Age of Stupid | Spanner Films The Age of Stupid stars Oscar-nominated Pete Postlethwaite (In The Name of the Father, The Usual Suspects, Brassed Off) as a man living in the devastated future world of 2055, looking back at old footage from our time and asking: why didn't we stop climate change when we had the chance? Launched at a Guinness World Recording-winning solar-powered premiere in London's Leicester Square, the film was released in cinemas worldwide, topped the UK box office (by screen average), became one of the most talked-about films of 2009 and garnered sensational reviews: The Telegraph called it "Bold, supremely provocative and hugely important", the News of the World described it as "A deeply inconvenient kick up the backside", ABC Australia said "So tightly constructed and dynamic you leave the cinema energised rather than terrified... hits home like a hammer blow" and the LA Times said "Think 'An Inconvenient Truth', but with a personality".

Sea-level Rise - CSIRO & ACECRC We love the coast. Coastal regions, particularly some low-lying river deltas, have very high population densities. In excess of 150 million people live within 1 metre of high tide level, and 250 million within 5 metres of high tide. The Oceans are changing. A recent issue of the journal Science has focused on a number of aspects of ocean change, including sea-level rise. A (pdf) reprint of this editorial can be obtained from here. This sea-level rise is a response to increasing concentrations of greenhouse gases in the atmosphere and the consequent changes in the global climate. On this web site, we attempt to bring together information on sea level rise and its causes. Photos: Bruce Miller, 2006 Our most recent estimate of changes in global averaged sea level since 1993 are estimated from satellite altimeter data (red) and since 1880 by combining in situ sea level data from coastal tide gauges and the spatial patterns of variability determined from satellite altimeter data (blue). [top]

Climate Change comic I intend to come back to this strip and rewrite some of the first half, in order to make the science clearer. I'm sure there will be a few spelling errors and suchlike. Feel free to point them out, but keep in mind that I've been staring at many of these pages for weeks, to the point where even the word 'and' looks funny to me. Note: added Jan 2012. A few references. Superb New Yorker piece about the Koch Brothers and their involvement with the far right. That Proceedings of the National Academy of Science paper, which I mention in the strip, on the numbers of climate researchers who believe that science points to the truth of man made climate change, compared to those researchers who don't. Excellent book that does what it says on the tin. NASA's climate change evidence page. Wikipeadia entry on the the Fourth Assessment Report (AR4) of the United Nations Intergovernmental Panel on Climate Change (IPCC). Scott Mandia's research into the media's deplorable Climategate coverage.

An Inconvenient Truth An Inconvenient Truth is a 2006 Academy Award winning documentary film directed by Davis Guggenheim about former United States Vice President Al Gore's campaign to educate citizens about global warming via a comprehensive slide show that, by his own estimate made in the film, he has given more than a thousand times. The idea to document his efforts came from producer Laurie David who saw his presentation at a town-hall meeting on global warming which coincided with the opening of The Day After Tomorrow. Laurie David was so inspired by Gore's slide show that she, with producer Lawrence Bender, met with Guggenheim to adapt the presentation into a film. Since the film's release, An Inconvenient Truth has been credited for raising international public awareness of climate change and reenergizing the environmental movement. Synopsis [edit] The former vice president opens the film by greeting an audience with a joke: "I am Al Gore; I used to be the next President of the United States

Australia - Sea surface Temperatures The spring of 2013 has been Australia’s warmest on record. Mean temperatures for the season were 1.57°C above the 1961–1990 average, surpassing the previous record of 1.43°C (set in 2006) by 0.14°C. Daytime maximum temperatures were also the highest on record, coming in 2.07°C above average and 0.24°C above the previous record (also set in 2006). Overnight minimum temperatures were the fourth-warmest on record with an anomaly of +1.07°C. As described previously (see Australia’s warmest 12-month period on record) the warmth was most significant in September, which saw a mean temperature anomaly of +2.75°C, setting a new monthly record by more than a degree. At 1.43°C above average, October was also a very warm month. The spring warmth was extensive, with virtually the entire country experiencing above-average mean temperatures. Australian temperatures have warmed by about 1° C since 1910, with the warming being fastest during spring. The Remainder of 2013

How much is sea level rising? Gavin Schmidt investigated the claim that tide gauges on islands in the Pacific Ocean show no sea level rise and found that the data show a rising sea level trend at every single station. But what about global sea level rise? Sea level rises as ice on land melts and as warming ocean waters expand. As well as being a threat to coastal habitation and environments, sea level rise corroborates other evidence of global warming The blue line in the graph below clearly shows sea level as rising, while the upward curve suggests sea level is rising faster as time goes on. The upward curve agrees with global temperature trends and with the accelerating melting of ice in Greenland and other places. Because the behavior of sea level is such an important signal for tracking climate change, skeptics seize on the sea level record in an effort to cast doubt on this evidence. graph from Church 2008 Various technical criticisms are mounted against satellite altimeter measurements by skeptics.

Ice isn't melting Ice is melting at accelerating rates in the Arctic, Antarctica, Greenland, and glaciers all over the world. Ice sheets are beginning to shrink An ice sheet is a huge layer of land ice. The only ice sheets are in Antarctica and Greenland. The Greenland ice sheet is losing mass at an accelerating rate. (Image source: Climate Signals.) Similarly, Antarctica is also losing ice at an accelerating rate. (Image source: NASA.) Ice shelves are collapsing Ice shelves are thick, floating platforms of ice formed when glaciers flow from the land onto the ocean surface. The Antarctic Peninsula is warming rapidly. (Image source: National Snow and Ice Data Center.) Glaciers are retreating Glaciers are retreating around the globe. (Image data source: Cogley 2009.) And despite all the hype about a certain mistake in the 2007 IPCC report, the Himalayan glaciers are in fact melting. Southern sea ice not doing much Sea ice floats on the ocean surface, and is not to be confused with ice sheets on land.

Sea level rise in Kowanyama Qld “When that whole ocean comes and rises up, where are we going to go?” ponders Inherkowinginambana, a Kunjen elder from Kowanyama, a coastal Aboriginal community in tropical Queensland, Australia. “Every year it (the tide) comes in, it goes a bit further up….once it hits the swamps, that will kill all the plant life, and the waterways,” adds an Aboriginal ranger who works with local elders to protect Aboriginal country and culture. These tidal changes are not unique to Australia. Historically, scientists have documented a wide fluctuation in sea level rise. So how does climatic warming lead to sea level change? Research has shown that thermal expansion of sea water is the leading contributor to sea level change. As the temperature increases, the ocean warms, causing water to expand and the sea level to rise; similar to what happens when bottled water is left out in the heat. The Kowanyama people The delicate balance between saltwater and freshwater has nurtured life in this arid land. Links

UNU - IAS The following text describes how several international processes have acknowledged the need for further awareness and understanding of the relationship between indigenous peoples and climate change, including: Millennium Ecosystem Assessment Encouraged by the Millennium Ecosystem Assessment process and findings and the unprecedented attention given by the international community to climate change, a number of indigenous peoples’ organizations have sought to adapt and implement the Millennium Ecosystem Assessment conceptual framework and carry out local assessments. The Vilcanota local assessment being carried out in Peru by Asociacion Andes and the Sustaining Local Foods Systems, Agrobiodiversity and Livelihoods Program of IIED, was identified as model for future local assessments. Consequently ANDES was asked by interested indigenous organizations to foster partnerships with research institutions and donor agencies to support local indigenous assessments and disseminate their results.