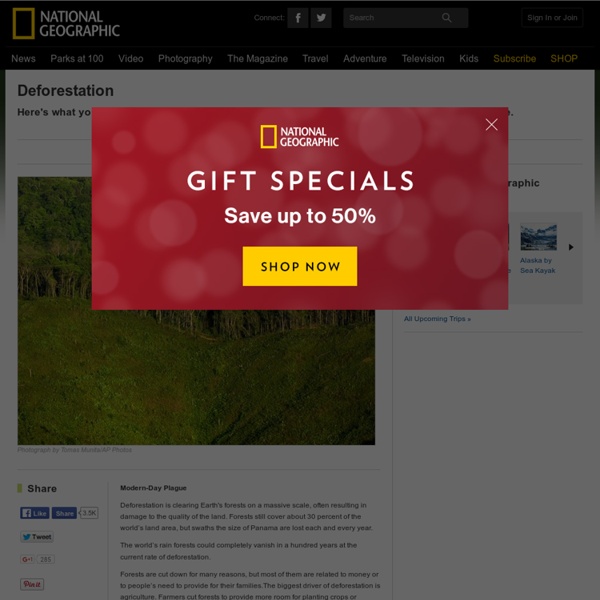 Modern-Day Plague Deforestation is clearing Earth's forests on a massive scale, often resulting in damage to the quality of the land. Forests still cover about 30 percent of the world’s land area, but swaths the size of Panama are lost each and every year. The world’s rain forests could completely vanish in a hundred years at the current rate of deforestation. Forests are cut down for many reasons, but most of them are related to money or to people’s need to provide for their families.The biggest driver of deforestation is agriculture. Farmers cut forests to provide more room for planting crops or grazing livestock. Logging operations, which provide the world’s wood and paper products, also cut countless trees each year. Not all deforestation is intentional. Deforestation has many negative effects on the environment. Deforestation also drives climate change. Trees also play a critical role in absorbing the greenhouse gases that fuel global warming.

Deforestation Deforestation, clearance or clearing is the removal of a forest or stand of trees where the land is thereafter converted to a non-forest use.[1] Examples of deforestation include conversion of forestland to farms, ranches, or urban use. Deforestation occurs for many reasons: trees are cut down to be used or sold as fuel (sometimes in the form of charcoal) or timber, while cleared land is used as pasture for livestock, plantations of commodities and settlements. The removal of trees without sufficient reforestation has resulted in damage to habitat, biodiversity loss and aridity. National Geographic: Eye in the Sky The statistics paint a grim picture. According to the World Resources Institute, more than 80 percent of the Earth’s natural forests already have been destroyed. Up to 90 percent of West Africa’s coastal rain forests have disappeared since 1900.

Illegal logging Illegal logging threatens some of the most valuable forests globally – from the Amazon to the Russian Far East. And yet, for many of the people that live in these forests, illegal logging is a vital source of income - sometimes it is the only way to survive. But at other times it threatens their lives. Increased demand for forests products has brought some financial benefits for poor people living near to forests. But there is also evidence to show that usually, poor communities who are completely dependent on forests lose out to powerful interests, logging companies and migrant workers who reap most of the benefits.

Deforestation: Facts, Causes & Effects Deforestation is the permanent destruction of forests in order to make the land available for other uses. An estimated 18 million acres (7.3 million hectares) of forest, which is roughly the size of the country of Panama, are lost each year, according to the United Nations' Food and Agriculture Organization (FAO). Some other statistics: About half of the world's tropical forests have been cleared (FAO) Forests currently cover about 30 percent of the world’s land mass (National Geographic) Forest loss contributes between 6 percent and 12 percent of annual global carbon dioxide emissions (Nature Geoscience) About 36 football fields worth of trees lost every minute (World Wildlife Fund (WWF)) Rain Forest Threats, Rain Forest Species More than half of Earth’s rain forests have already been lost forever to the insatiable human demand for wood and arable land. Rain forests that once grew over 14 percent of the land on Earth now cover only about 6 percent. And if current deforestation rates continue, these critical habitats could disappear from the planet completely within the next hundred years.

What is deforestation? What is deforestation? Deforestation is when humans remove or clear large areas of forest lands and related ecosystems for non-forest use. These include clearing for farming purposes, ranching and urban use. Amazon Rain Forest, Deforestation, Forest Conservation - National Geographic Magazine Last of the Amazon In the time it takes to read this article, an area of Brazil's rain forest larger than 200 football fields will have been destroyed. The market forces of globalization are invading the Amazon, hastening the demise of the forest and thwarting its most committed stewards. In the past three decades, hundreds of people have died in land wars; countless others endure fear and uncertainty, their lives threatened by those who profit from the theft of timber and land. In this Wild West frontier of guns, chain saws, and bulldozers, government agents are often corrupt and ineffective—or ill-equipped and outmatched. Now, industrial-scale soybean producers are joining loggers and cattle ranchers in the land grab, speeding up destruction and further fragmenting the great Brazilian wilderness.

WWF: Deforestation Main Page Forests cover 31% of the land area on our planet. They produce vital oxygen and provide homes for people and wildlife. Many of the world’s most threatened and endangered animals live in forests, and 1.6 billion people rely on benefits forests offer, including food, fresh water, clothing, traditional medicine and shelter. But forests around the world are under threat from deforestation, jeopardizing these benefits. Deforestation comes in many forms, including fires, clear-cutting for agriculture, ranching and development, unsustainable logging for timber, and degradation due to climate change.

Deforestation Forests cover 31% of the land area on our planet. They produce vital oxygen and provide homes for people and wildlife. Many of the world’s most threatened and endangered animals live in forests, and 1.6 billion people rely on benefits forests offer, including food, fresh water, clothing, traditional medicine and shelter. But forests around the world are under threat from deforestation, jeopardizing these benefits. Deforestation comes in many forms, including fires, clear-cutting for agriculture, ranching and development, unsustainable logging for timber, and degradation due to climate change. Forests: Threats to our forests Deforestation Results of deforestation Forests are cleared all around the world for a number of reasons, including: Harvesting of timber to produce wood and paper products Clearing land for farms, cash-crop plantations, and cattle ranching Clearing land for urban development, including homes and roads. Forests are also being destroyed by acid rain resulting from our pollution-causing activities and through the introduction of disease and invasive species. Deforestation is a very real environmental threat.