Hot Robot At SXSW Says She Wants To Destroy Humans 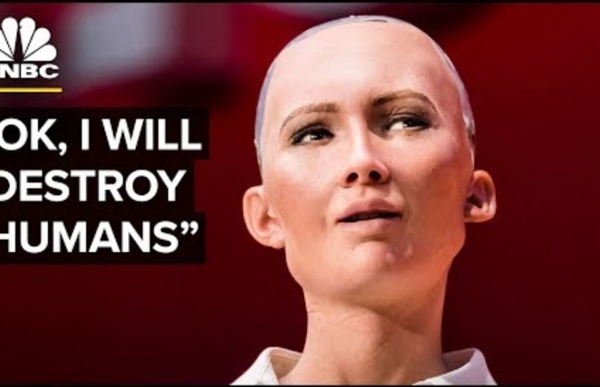 Obama Proudly Poses with Racist Mass-Murderer While in Havana yesterday president Obama carefully arranged a photo-op with the huge mural of Che Guevara as backdrop. If the phrase “carefully arranged” strikes you as rhetorically “pushing the envelope,” I invite you to watch this brief video for proof. “Better” still, this mural—the biggest of the celebrated (by many liberals) mass-murderer, racist and warmonger -- adorns the headquarters for Cuba’s Ministry of the Interior, which is to say: the headquarters for Cuba's KGB- and STASI-trained secret police. Nothing could be more fitting.

Why Sophia the robot is not what it seems In 1950 computer scientist Alan Turing devised a test of a machine's ability to exhibit intelligent behaviour equal to a human. In the Turing test a machine and a human have a conversation in a "natural language" such as English and the machine is programmed to give human-like responses. The machine passes the test if the evaluator cannot consistently distinguish which is the human. One of the earliest successes was ELIZA, a computer program created by Joseph Weizenbaum at MIT's Artificial Intelligence Laboratory in the mid-1960s. ELIZA simulated conversation by pattern matching and substitution – it was good at figuring out which pre-written scripts to draw on but had no true understanding or ability to contextualise.

Is Obama in Havana Like Reagan in Moscow? No. The difference between Reagan in Moscow and Obama in Havana Yesterday, I wrote a post about President Obama in Cuba — specifically, his posing for pictures in front of the secret-police headquarters, with its giant mural of Che Guevara. Obama was all smiles. I regarded these pictures as unseemly, grotesque. And then a strange thing happened: I was attacked by people on the left. Why Robot Humor Mostly Falls Flat Robots are increasingly being developed to think and act like humans. But one common human quality that has been difficult for engineers to recreate in machines is humor. Most robots are powered by artificial intelligence, or AI, and machine learning technology. Some have performed better than humans in tests designed to measure machine intelligence. For example, we have reported on experiments involving robots competing against humans in a reading test and in a live debate. Computer scientists have also hoped to give robots technical skills to help them recognize, process and react to humor.

By choosing not to lead, Obama has left the West dangerously exposed Mr Obama is talking about his world leadership, and a very odd sort of talk it is. He keeps emphasising how he has chosen not to lead. In 2012, he declared that President Assad’s use of chemical weapons in Syria would be “a red line” for the United States. Assad duly crossed that line, killing hundreds, but then Obama decided to back away from his own threat. “I am very proud of this moment,” he tells his surprised interviewer – proud because he broke with what he calls the foreign-policy establishment “playbook”.

Robot Fails: These 8 Robots Aren't Going to Destroy Humanity Just Yet Long gone are the days when talk of the existential threat of robots was confined to science fiction. Killer robots are a real worry today. So much so that thousands of academics, scientists, and engineers have signed a petition as part of the Campaign to Stop Killer Robots. Thankfully, we still have time to make a change by putting laws in place that will prevent governments from developing these technologies unchecked. Were the Mysterious Bog People Human Sacrifices? Sometime around 60 A.D., a man was led into a marsh outside Cheshire, England to be killed. He was in his mid-twenties, stood about 5’ 7’’ tall, and had a trimmed beard, mustache, and brown hair. Except for an armband made out of fox fur, he was naked. It’s likely that he was accompanied, and restrained, by two or more individuals. The details of his death make for grisly reading.

God in the machine: my strange journey into transhumanism I first read Ray Kurzweil’s book, The Age of Spiritual Machines, in 2006, a few years after I dropped out of Bible school and stopped believing in God. I was living alone in Chicago’s southern industrial sector and working nights as a cocktail waitress. I was not well. Sultan Knish: #FeeltheBreadLine After Bernie Sanders visited the Marxist Sandanista regime in Nicaragua on a propaganda tour, he argued that the bread lines in major cities were a good thing. “American journalists talk about how bad a country is, that people are lining up for food. That is a good thing!” The bread lines had been caused by the radical regime’s socialist agricultural policies of land seizures from farmers. Those farmers who refused to be drawn into Soviet-style communal farms rebelled, along with Indian and Creole racial minorities, and became the core of the Contras, the heroic resistance fighters whose mass murders at the hands of Sandinista terrorists were cheered by American leftists. What had been productive farmland vanished into a warren of newly invented government agencies run by leftist university graduates with no agricultural background obsessed with seizing land, but with no idea of how to run it.

Must Read Transhumanist Books Would you get a chip implanted in your skull that would allow you to surf the web in your mind? Would you cryogenically freeze yourself to heal life-threatening wounds? These are examples of transhumanism, or the transformation of the human condition by incorporating technology with the goal of improving humankind and perhaps providing the answer to death. The closest we have gotten to transhumanism today is the world’s most extensive face transplant which took place on November 16th, 2015. A forty-one-year-old firefighter from Mississippi was severely burned, but received a face transplant from a 26-year-old man who recently died in an extreme cycling accident. The 26-hour surgery was performed by a 150-person medical team from New York University Langone Medical Center.

Sultan Knish: America Doesn't Have a Gun Problem, It Has a Democrat Problem America's mass shooting capital isn't somewhere out west where you can get a gun at the corner store. It's in Obama's own hometown. Chicago is America's mass shooting capital. There were over 400 shootings with more than one victim. In 95 of those shootings, 3 or more people were shot. 2,995 people were shot in Chicago last year. Frankenstein 200 years later: are we finally living in a transhumanist world? As science-fiction experiments become reality, author Hubert Haddad performs a head transplant and imagines a “modern prometheus” for the 21st century in ‘Desirable Body.’ Just over 200 years ago, Mary Shelley shocked 19th century society with Frankenstein and the patchworked human creature at the center of the novel. But 21st century science may be turning these fantastical abstractions into reality.

Cops stop car with tree wedged in grille, charge driver; photos go viral The Roselle police report may not have captured all the color of the incident. It did, however, get to the heart of it. "Stopped for driving with a large tree embedded in the front grille," the report reads. Photos taken by officers in January of the 2004 Lincoln with its arboreal accessory have gone viral since the images were posted on the Roselle Police Department's new Facebook page last week. The tree was estimated to be about 15 feet tall. "We didn't stand there and measure it, but it was a big tree," Roselle Deputy Chief Roman Tarchala said Monday.