13 frameworks for mastering machine learning. Our previous roundup of machine learning resources touched mlpack, a C++-based machine learning library originally rolled out in 2011 and designed for “scalability, speed, and ease-of-use,” according to the library’s creators. 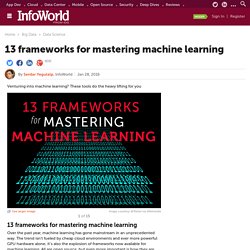 Implementing mlpack can be done through a cache of command-line executables for quick-and-dirty, “black box” operations, or with a C++ API for more sophisticated work. The 2.0 version has lots of refactorings and new features, including many new kinds of algorithms, and changes to existing ones to speed them up or slim them down. For example, it ditches the Boost library’s random number generator for C++11’s native random functions. One long-standing disadvantage is a lack of bindings for any language other than C++, meaning users of everything from R to Python can’t make use of mlpack unless someone rolls their own wrappers for said languages.

The Current State of Machine Intelligence 2.0. (This article was originally posted at A year ago, I published my original attempt at mapping the machine intelligence ecosystem. 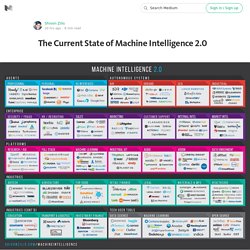 So much has happened since. I spent the last 12 months geeking out on every company and nibble of information I can find, chatting with hundreds of academics, entrepreneurs, and investors about machine intelligence. This year, given the explosion of activity, my focus is on highlighting areas of innovation, rather than on trying to be comprehensive. Figure 1 showcases the new landscape of machine intelligence as we enter 2016: Despite the noisy hype, which sometimes distracts, machine intelligence is already being used in several valuable ways.

The two biggest changes I’ve noted since I did this analysis last year are (1) the emergence of autonomous systems in both the physical and virtual world and (2) startups shifting away from building broad technology platforms to focusing on solving specific business problems. Reflections on the landscape (Eh)-I. Best Mind-Mapping Apps. Why does Deep Learning work? Why does Deep Learning work? 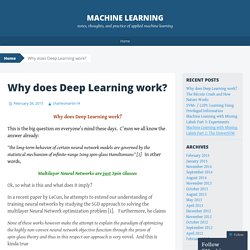 This is the big question on everyone’s mind these days. C’mon we all know the answer already: “the long-term behavior of certain neural network models are governed by the statistical mechanism of infinite-range Ising spin-glass Hamiltonians” [1] In other words, Multilayer Neural Networks are just Spin Glasses Ok, so what is this and what does it imply? In a recent paper by LeCun, he attempts to extend our understanding of training neural networks by studying the SGD approach to solving the multilayer Neural Network optimization problem [1].

None of these works however make the attempt to explain the paradigm of optimizing the highly non-convex neural network objective function through the prism of spin-glass theory and thus in this respect our approach is very novel. But here’s the thing…we already have a good idea of what the Energy Landscape of multiscale spin glass models* look like–from early theoretical protein folding work (by Wolynes, Dill, etc [2,3,4]). Interactive Periodic Table of Machine Learning Libraries. Weka 3 - Data Mining with Open Source Machine Learning Software in Java. WEKA_Ecosystem.pdf. Machine Learning: The High Interest Credit Card of Technical Debt. Deep Learning 101. Deep learning has become something of a buzzword in recent years with the explosion of 'big data', 'data science', and their derivatives mentioned in the media. 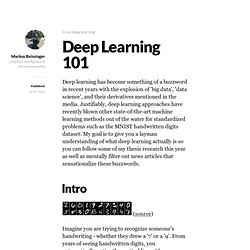 Justifiably, deep learning approaches have recently blown other state-of-the-art machine learning methods out of the water for standardized problems such as the MNIST handwritten digits dataset. My goal is to give you a layman understanding of what deep learning actually is so you can follow some of my thesis research this year as well as mentally filter out news articles that sensationalize these buzzwords. (source) Imagine you are trying to recognize someone's handwriting - whether they drew a '7' or a '9'.

From years of seeing handwritten digits, you automatically notice the vertical line with a horizontal top section. Current machine learning algorithms' performance depends heavily on the particular features of the data chosen as inputs.