Lessons from Deep Mind & Vicarious. Recently we've seen a bunch of Silicon Valley money going into "deep learning" oriented AI startups -- an exciting trend for everyone in the AI field. 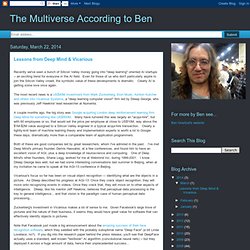 Even for those of us who don't particularly aspire to join the Silicon Valley crowd, the symbolic value of these developments is dramatic. Clearly AI is getting some love once again. A couple months ago, the big story was Google acquiring London deep reinforcement learning firm Deep Mind for something like US$500M. Many have rumored this was largely an "acqui-hire", but with 60 employees or so, that would set the price per employee at close to US$10M, way above the $1M-$2M value assigned to a Silicon Valley engineer in a typical acqui-hire transaction.

Clearly a tightly-knit team of machine learning theory and implementation experts is worth a lot to Google these days, dramatically more than a comparable team of application programmers. Both of these are good companies led by great researchers, whom I've admired in the past. Google's robot army in action. Google sees Amazon's drones, and raises its own army of robots. With Amazon winning headlines (if not universal praise) for its ambitions to deliver packages using drones, rival tech giant Google has announced its latest futuristic "moonshot": robots. The initiative is led by Andy Rubin, the former head of Google's Android division, who stepped down from that role in March 2013. Since then, Google has quietly acquired seven robotics companies according to the New York Times, which has published the first interview with Rubin on the company's plans. "Like any moonshot, you have to think of time as a factor. We need enough runway and a 10-year vision," said Rubin, who started his career as a robotics engineer at Carl Zeiss, before later roles at Apple, Microsoft and Danger, before founding the startup acquired by Google to form the basis for Android.

"I have a history of making my hobbies into a career. The piece suggests Google is focusing more on robots for the manufacturing and retail industries, rather than consumer products. Bot & Dolly. Google in bid for smart home-devices market with $3.2bn Nest Labs purchase. Google has expanded its presence in consumer homes by buying Nest Labs, a connected device company which makes smart thermostats and smoke detectors, for $3.2bn. 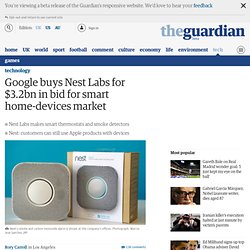 The internet search giant announced an agreement to acquire Nest on Monday, signalling a deeper push into a new market of app-controlled household devices. “They’re already delivering amazing products you can buy right now – thermostats that save energy and smoke/CO alarms that can help keep your family safe,” Google CEO Larry Page said in a statement. “We are excited to bring great experiences to more homes in more countries and fulfill their dreams!” Google's stock increased 0.53% after the announcement. In a blog post Nest's CEO, Tony Fadell, called the deal momentous but said the Silicon Valley company would retain its current leadership and brand identity.

Fadell, who was part of the team at Apple that created the iPod and iPhone, is known as "the father of the iPod". Are the robots about to rise? Google's new director of engineering thinks so… It's hard to know where to start with Ray Kurzweil. 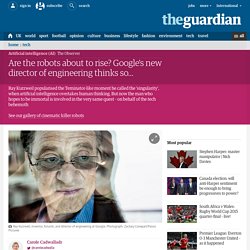 With the fact that he takes 150 pills a day and is intravenously injected on a weekly basis with a dizzying list of vitamins, dietary supplements, and substances that sound about as scientifically effective as face cream: coenzyme Q10, phosphatidycholine, glutathione? With the fact that he believes that he has a good chance of living for ever? He just has to stay alive "long enough" to be around for when the great life-extending technologies kick in (he's 66 and he believes that "some of the baby-boomers will make it through").

Or with the fact that he's predicted that in 15 years' time, computers are going to trump people. That they will be smarter than we are. But then everyone's allowed their theories. The Dawn of the Age of Artificial Intelligence. Reuters The advances we’ve seen in the past few years—cars that drive themselves, useful humanoid robots, speech recognition and synthesis systems, 3D printers, Jeopardy! 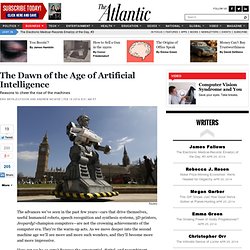 -champion computers—are not the crowning achievements of the computer era. They’re the warm-up acts. As we move deeper into the second machine age we’ll see more and more such wonders, and they’ll become more and more impressive. How can we be so sure? Either of these advances alone would fundamentally change our growth prospects. Thinking Machines, Available now Digital machines have escaped their narrow confines and started to demonstrate broad abilities in pattern recognition, complex communication, and other domains that used to be exclusively human.

We’re going to see artificial intelligence do more and more, and as this happens costs will go down, outcomes will improve, and our lives will get better. Billions of Innovators, Coming Soon.

Related:  Futurology   -  More and More and... Thoughts to give Thought to   -  Possible Ending Scenarios   -  Speculating about AI & its Progress   -  Art & Science   -  Thoughts of Being Alive   -  Alternative Live Style   -  Neuroscience   -  Are the robots about to rise? Google's new director of engineering thinks so…   -  Education   -  Enterprise