Henry Markram builds a brain in a supercomputer 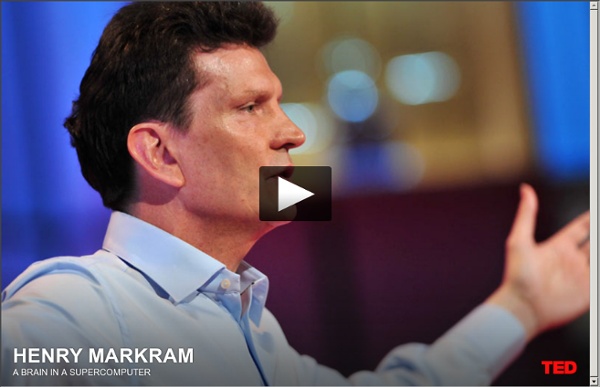 The Singularity is Far: A Neuroscientist's View David J. Linden is the author of a new book,The Compass of Pleasure: How Our Brains Make Fatty Foods, Orgasm, Exercise, Marijuana, Generosity, Vodka, Learning, and Gambling Feel So Good. He is a professor of neuroscience at The Johns Hopkins University School of Medicine and Chief Editor of the Journal of Neurophysiology. Ray Kurzweil, the prominent inventor and futurist, can't wait to get nanobots into his brain. "By the late 2020s, nanobots in our brain, that will get there noninvasively, through the capillaries, will create full-immersion virtual-reality environments from within the nervous system. Of course, there's no reason why these nanobots must be restricted in their manipulations to the sensory portions of the brain. At that point, boundaries between brain, mind, and machine would fall away. Image: Harris KM, Fiala JC, Ostroff L. I am a neurobiologist and I have spent the past 28 years engaged in studies of the cellular and molecular basis of memory and cognition.

Blue Brain Project Anatomy | Anatomy Atlas | Human Anatomy | Cross Sectional Anatomy | Anatomy Education | Anatomy Library - Anatomy Atlases Bob the Blue Brain Builder Can we build an artificial brain in silicon? Regardless of whether it’s a good idea or not (insert paranoid fear of unleashing skynet here) is it even possible? I think it is, not that I know how, but maybe I’m not enough of a mad scientist. This is where I introduce our modern Frankenstein, one Professor Henry Markram and his Blue Brain Project. He has claimed that by 2018 his team will have created the world’s first artificial conscious and intelligent mind. That’s no small claim. Let’s start by looking at the plus side. So he’s no fringe lunatic, but does he have the resources to have a serious go at building an artificial brain? He’s got the street cred, he’s got the cash, he’s ev en got a ‘bad-ass’ crew (Michael Hines and Ted Carnevale, the world leaders in neural simulation are helping program his IBM super-cruncher). Almost certainly not. General principles are sorely missing in the neuroscience field. Is the Blue Brain therefore a monstrous white elephant? From nerd-alert.net

Thanks for the context! I find this a very fascinating field. You seem quite knowledgeable on the subject: any other sites you would recommend to follow this up? by cassius Nov 21

Henry Markram simulates a brain's neurons and the neurons' connections (ie. a 'connectome' cf. "Sebastian Seung: i am my connectome") on a supercomputer. A striking difference with AI artificial neural networks is a each neuron and its bochemistry is simulated on a processor, whereas AI uses an (over) simplified model of a few bytes as a neuron and simple caltulations (adding, multiplying) as signal exchange. Markram's technology driven approach differs from Ramachandran's low-tech (mirrors in a box) clinical approach in "Ramachandran: on your mind". by kaspervandenberg Nov 7