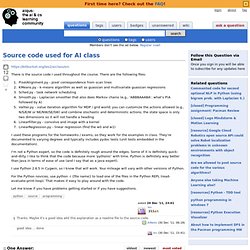 There are the following files: PixelAlignment.py - pixel correspondence from scan linesKMeans.py - k-means algorithm as well as guassian and multivariate guassian regressionsSched.py - task network schedulingSmooth.py - Laplacian smoother that also does Markov chains (e.g., 'ABBBAAABA', what's P(A followed by A)ValIter.py - value iteration algorithm for MDP / grid world; you can customize the actions allowed (e.g., N/S/E/W or NE/NW/SE/SW) and combine stochastic and deterministic actions; the state space is only two dimensions so it will not handle a headingLinearFilter.py - convolve and image with a kernelLinearRegression.py - linear regression (find the w0 and w1) I used these programs for the homeworks / exams, so they work for the examples in class. They're documented to varying degrees and typically includes pydoc tests (unit tests embedded in the documentation).

Weka (machine learning) Free availability under the GNU General Public License.Portability, since it is fully implemented in the Java programming language and thus runs on almost any modern computing platform.A comprehensive collection of data preprocessing and modeling techniques.Ease of use due to its graphical user interfaces. 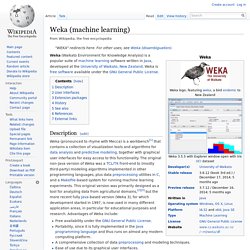 Weka supports several standard data mining tasks, more specifically, data preprocessing, clustering, classification, regression, visualization, and feature selection. All of Weka's techniques are predicated on the assumption that the data is available as a single flat file or relation, where each data point is described by a fixed number of attributes (normally, numeric or nominal attributes, but some other attribute types are also supported). Weka provides access to SQL databases using Java Database Connectivity and can process the result returned by a database query.

The Explorer interface features several panels providing access to the main components of the workbench: CS 188: Lectures. QLearning - opennero - Q-Learning demo - game platform for Artificial Intelligence research and education. Introduction Q-Learning (section 21.2.3 of AIMA) is a type of temporal difference Reinforcement Learning that uses a value function to pick the best action. In this demo, a Q-Learning agent leans to navigate the maze from experience: It learns how likely each possible move (north, south, west, east) at each location of the maze is to lead to the goal.

The video below shows how it works; you can also run OpenNERO yourself to test it interactively. Running the Demo To run the demo, start OpenNERO Start the Maze mod Select the method you want to run from the pull-down menu: Q-Learning (Coarse) runs the coarse-grained (easy) version Q-Learning (Fine) runs the fine-grained (more difficult) version First Person Coarse/Fine allows you to solve the maze yourself Click on the Start button to start the demo You can also The details of each method are described below. 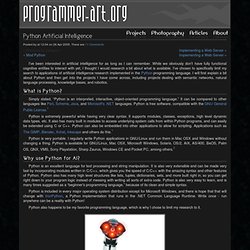 There are 11 Comments I've been interested in artificial intelligence for as long as I can remember. While we obviously don't have fully functional cognitive entities to interact with yet, I thought I would research a bit about what is available. I've chosen to specifically limit my search to applications of artificial intelligence research implemented in the Python programming language. Simply stated, Python is an interpreted, interactive, object-oriented programming language. Python is extremely powerful while having very clear syntax. Python is very portable. Python is an excellent language for text processing and string manipulation.

Python is included in every major operating system distribution except for Microsoft Windows, and there is hope that that will change with IronPython, a Python implementation that runs in the .NET Common Language Runtime. WowWee RoboBoa. Amit’s A* Pages. AI Challenge. Bayes' Theorem. Bayes' Theorem Consider Goldie Lockes' predicament. 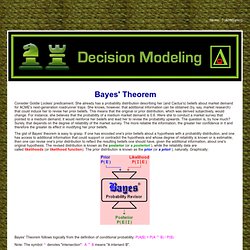 She already has a probability distribution describing her (and Cactus's) beliefs about market demand for ACME's next-generation roadrunner traps. She knows, however, that additional information can be obtained (by, say, market research) that could induce her to revise her prior beliefs. This means that the original or prior distribution, which was derived subjectively, would change. For instance, she believes that the probability of a medium market demand is 0.6. The gist of Bayes' theorem is easy to grasp. Bayes' Theorem follows logically from the definition of conditional probability: P(A|B) = P(A ^ B) / P(B) Note: The symbol ^ denotes "intersection": A ^ B means "A intersect B".