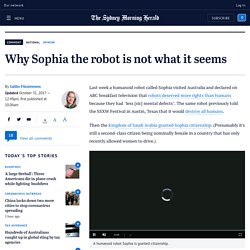 In the Turing test a machine and a human have a conversation in a "natural language" such as English and the machine is programmed to give human-like responses. The machine passes the test if the evaluator cannot consistently distinguish which is the human. One of the earliest successes was ELIZA, a computer program created by Joseph Weizenbaum at MIT's Artificial Intelligence Laboratory in the mid-1960s. ELIZA simulated conversation by pattern matching and substitution – it was good at figuring out which pre-written scripts to draw on but had no true understanding or ability to contextualise.

Nonetheless, many early users were convinced of ELIZA's intelligence and understanding. As any magician would tell you, the audience wants to be fooled. Natural-language processing is a type of AI. Why Robot Humor Mostly Falls Flat. Robots are increasingly being developed to think and act like humans. 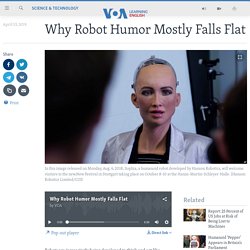 But one common human quality that has been difficult for engineers to recreate in machines is humor. Most robots are powered by artificial intelligence, or AI, and machine learning technology. Some have performed better than humans in tests designed to measure machine intelligence. For example, we have reported on experiments involving robots competing against humans in a reading test and in a live debate. Computer scientists have also hoped to give robots technical skills to help them recognize, process and react to humor. Context is everything. Robot Fails: These 8 Robots Aren't Going to Destroy Humanity Just Yet. Long gone are the days when talk of the existential threat of robots was confined to science fiction. 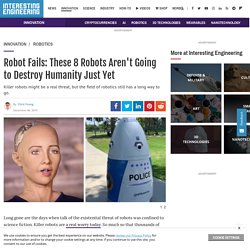 Killer robots are a real worry today. So much so that thousands of academics, scientists, and engineers have signed a petition as part of the Campaign to Stop Killer Robots. Cyborgs, Cryonics and Transhumanism. NPR Choice page. NPR Choice page. God in the machine: my strange journey into transhumanism. I first read Ray Kurzweil’s book, The Age of Spiritual Machines, in 2006, a few years after I dropped out of Bible school and stopped believing in God. 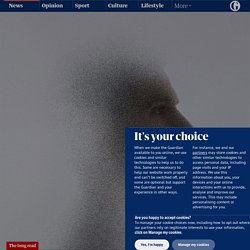 I was living alone in Chicago’s southern industrial sector and working nights as a cocktail waitress. I was not well. Beyond the people I worked with, I spoke to almost no one. I clocked out at three each morning, went to after-hours bars, and came home on the first train of the morning, my head pressed against the window so as to avoid the spectre of my reflection appearing and disappearing in the blackened glass.

At Bible school, I had studied a branch of theology that divided all of history into successive stages by which God revealed his truth. Transhumanism: How far would you go for a body upgrade? Transhuman Is M(e)! – Google Drive. Humans Trailer. Must Read Transhumanist Books. Would you get a chip implanted in your skull that would allow you to surf the web in your mind? 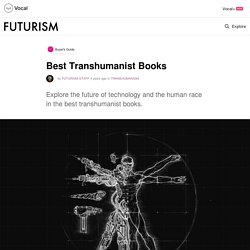 Would you cryogenically freeze yourself to heal life-threatening wounds? These are examples of transhumanism, or the transformation of the human condition by incorporating technology with the goal of improving humankind and perhaps providing the answer to death. The closest we have gotten to transhumanism today is the world’s most extensive face transplant which took place on November 16th, 2015. A forty-one-year-old firefighter from Mississippi was severely burned, but received a face transplant from a 26-year-old man who recently died in an extreme cycling accident. The 26-hour surgery was performed by a 150-person medical team from New York University Langone Medical Center.

Transhumanism has been present in sci-fi books for decades. In the near future, enormous silver spaceships appear without warning over mankind's largest cities. How we'll become cyborgs and extend human potential. Frankenstein & Prometheus - Video & Lesson Transcript. A Cultural History of Frankenstein: The Modern Prometheus. Frankenstein 200 years later: are we finally living in a transhumanist world? As science-fiction experiments become reality, author Hubert Haddad performs a head transplant and imagines a “modern prometheus” for the 21st century in ‘Desirable Body.’ 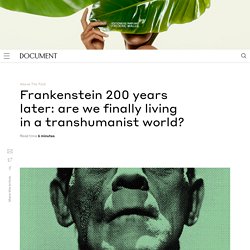 Just over 200 years ago, Mary Shelley shocked 19th century society with Frankenstein and the patchworked human creature at the center of the novel. But 21st century science may be turning these fantastical abstractions into reality. In November, the Chinese government placed Dr. He Jiankui under investigation following the claim that he successfully made the first genetically altered human babies: two twin girls.

This dubious experiment is only the most recent example of the knotty relationship between human progress and ethical controversy. Tunisian author Hubert Haddad takes up the second possibility with his novel Desirable Body. No death and an enhanced life: Is the future transhuman? The aims of the transhumanist movement are summed up by Mark O’Connell in his book To Be a Machine, which last week won the Wellcome Book prize. 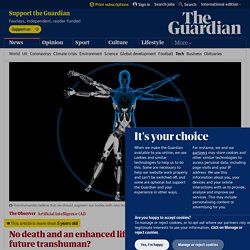