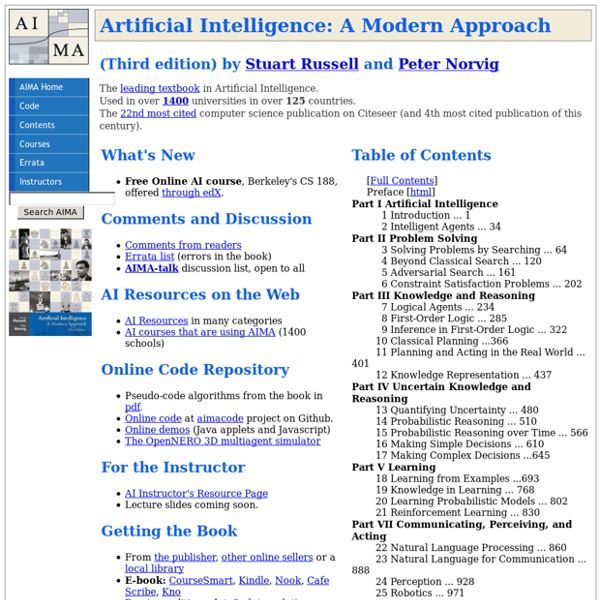 An Introduction to Machine Learning By Miroslav Kubat PDF - mechatroniclib ➤1 A Simple Machine-Learning Task ➤2 Probabilities: Bayesian Classifiers ➤3 Similarities: Nearest-Neighbor Classifiers ➤4 Inter-Class Boundaries: Linear and Polynomial Classifiers ➤5 Artificial Neural Networks ➤6 Decision Trees Free Classes. Awesome Instructors. Inspiring Community. When does the course begin? This class is self paced. You can begin whenever you like and then follow your own pace.

Let's Make Robots!-Mozilla Firefox Hi all, This is it! As I got a fully (more or less) functional CNC (see here: I can finally start doing what I have intended from the beginning: BUILDING BOTS. This one will scratch my "must build track robot" itch and at the same time I hope I'll be able to use it as a development platform in general, to test various stuff on it. Z-39 aims to be completely build using machined parts. Robots master skills with ‘deep learning’ technique Robot learns to use hammer. What could go wrong? (credit: UC Berkeley) UC Berkeley researchers have developed new algorithms that enable robots to learn motor tasks by trial and error, using a process that more closely approximates the way humans learn. They demonstrated their technique, a type of reinforcement learning, by having a robot complete various tasks — putting a clothes hanger on a rack, assembling a toy plane, screwing a cap on a water bottle, and more — without pre-programmed details about its surroundings. A new AI approach

Programming Collective Intelligence Subscriber Reviews Average Rating: Based on 8 Ratings "Useful book on machine learning, etc." - by Alex Ott on 20-JUL-2011Reviewer Rating: Very good introduction into machine-learning, information retrieval & data mining related questions. DARPA Grand Challenge (2005) The second driverless car competition of the DARPA Grand Challenge was a 212 km (132 mi) off-road course that began at 6:40am on October 8, 2005, near the California/Nevada state line. All but one of the 23 finalists in the 2005 race surpassed the 11.78 km (7.32 mi) distance completed by the best vehicle in the 2004 race. Five vehicles successfully completed the course: Beer Bottle Pass Vehicles in the 2005 race passed through three narrow tunnels and navigated more than 100 sharp left and right turns. The race concluded through Beer Bottle Pass, a winding mountain pass with sheer drop-offs on both sides.

Ordis Solarius Articulum Kapacitusbankus Abampere Quinquaginta OSAKA50 I received a "Animaris Ordis Parvus" leg kit from our friends at Gakken .... AOP :- Just look at those legs .... as a Bonus for sending my SchneeBeast for a Theo Jansen exhibition in Japan. The original kit was powered by the wind and indeed it drives forwards in the lightest of breezes. ( as proved by rik ) However it was calling out for a bit more power so what i present here is Solar powered version. The basic idea was to split the beest in half and drive both sides independently. 20 lines of code that beat A/B testing every time Zwibbler.com is a drop-in solution that lets users draw on your web site. A/B testing is used far too often, for something that performs so badly. It is defective by design: Segment users into two groups.

Whole Systems This area is devoted to the study of whole systems. Nature is a whole system. But also an economy, a family, a company, a community, or many other things, can be looked at as whole systems. A whole system view would include all the factors involved and examine how they relate to each other and how they work as a whole.

Take Stanford's AI Course For Free Online Not too long ago we told you about how you can access the course materials for Stanford University's introduction to computer science course. If you're looking for something a bit more advanced, Stanford will offer its artificial intelligence class online for free this fall. It will run from Sept 26 - Dec 16.