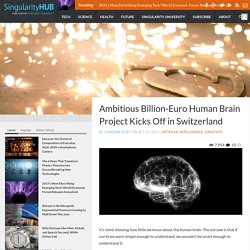 The old saw is that if our brain were simple enough to understand, we wouldn’t be smart enough to understand it. But that's really just a cute way of saying that research on the brain is limited by the same complexity and centrality that make the organ so interesting to us. Animal models can’t shed light on the intricacies of our elaborate command centers. Even when performing brain surgery, doctors can’t see how the seemingly humble lump of grey goo works. As computers have grown increasingly powerful and genetics more sophisticated, they have opened up new avenues for exploring how the brain’s 85 billion interconnected neurons work. It will be no small task. The brain is so complex, however, that even today’s computers are not powerful enough to do that work. 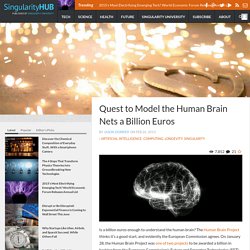 The Human Brain Project thinks it’s a good start, and evidently the European Commission agrees. On January 28, the Human Brain Project was one of two projects to be awarded a billion in backing from the European Commission's Future and Emerging Technologies (FET) Initiative. Henry Markram, the project’s founder and co-director, hopes that over the next decade the project's consortium of 80+ institutions will use up to an annual $100 million in funding to build a complete digital model of the human brain. The better we know the brain, the better we can diagnose and treat neurological disease, and maybe—in the greatest feat of natural reverse engineering to date—the better we can build computers and software as flexible, powerful, and efficient as the brain itself. 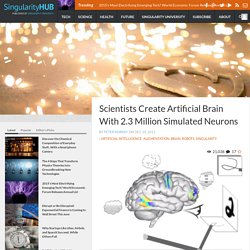 But this computer is different. Instead of the tour de force processing of Deep Blue or Watson’s four terabytes of facts of questionable utility, Spaun attempts to play by the same rules as the human brain to figure things out. Instead of the logical elegance of a CPU, Spaun’s computations are performed by 2.3 million simulated neurons configured in networks that resemble some of the brain’s own networks. It was given a series of tasks and performed pretty well, taking a significant step toward the creation of a simulated brain.

Spaunstands for Semantic Pointer Architecture: Unified Network. Spaun, the most realistic artificial human brain yet. A group of neuroscientists and software engineers at the University of Waterloo in Canada are claiming to have built the world’s most complex, large-scale model simulation of the human brain. 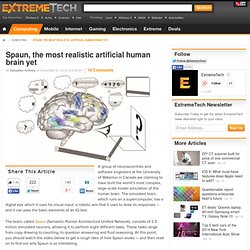 The simulated brain, which runs on a supercomputer, has a digital eye which it uses for visual input, a robotic arm that it uses to draw its responses — and it can pass the basic elements of an IQ test. The brain, called Spaun (Semantic Pointer Architecture Unified Network), consists of 2.5 million simulated neurons, allowing it to perform eight different tasks. These tasks range from copy drawing to counting, to question answering and fluid reasoning.

At this point, you should watch the video below to get a rough idea of how Spaun works — and then read on to find out why Spaun is so interesting. Now, the nitty-gritty details. All of this computation is performed in a physiologically accurate way, with simulated voltage spikes and neurotransmitters. How will we build an artificial human brain? Artificial-brain-project.com. Artificial brain. Artificial brain (or artificial mind) is a term commonly used in the media[1] to describe research that aims to develop software and hardware with cognitive abilities similar to those of the animal or human brain. 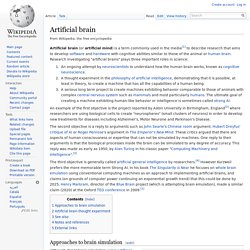 Research investigating "artificial brains" plays three important roles in science: An ongoing attempt by neuroscientists to understand how the human brain works, known as cognitive neuroscience.A thought experiment in the philosophy of artificial intelligence, demonstrating that it is possible, at least in theory, to create a machine that has all the capabilities of a human being.A serious long term project to create machines exhibiting behavior comparable to those of animals with complex central nervous system such as mammals and most particularly humans.