Is the Second Artificial Intelligence Winter Just Around the Corner? AI has always fascinated me. 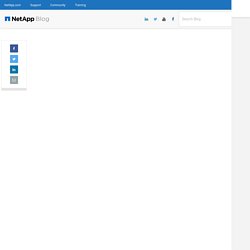 During my university days, I read every book and article on this topic I could find. Luckily, I received an internship and wrote my master’s thesis on AI. During my 10-month internship, I developed a search engine to enable fast and easy search of components for a CAD application. (The title was “Integration of an inference engine with backward chaining in a CAD software”). On Flipboard. Dark Future: Here's When We'll Have the Sentient Digital Avatars from Black Mirror. This article is part of a series about season four of Black Mirror, in which Futurism considers the technology pivotal to each episode and evaluates how close we are to having it. 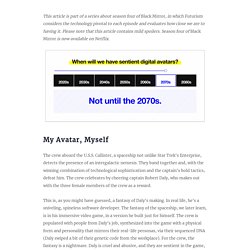 Please note that this article contains mild spoilers. Season four of Black Mirror is now available on Netflix. My Avatar, Myself The crew aboard the U.S.S. Soon We Won't Be Able to Tell the Difference Between AI and a Human Voice. The Voice of AI Using their DeepMind artificial intelligence (AI), Google’s Alphabet AI research lab developed a synthetic speech system called WaveNet back in 2016. 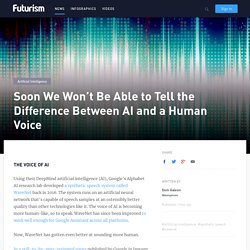 The system runs on an artificial neural network that’s capable of speech samples at an ostensibly better quality than other technologies like it. The voice of AI is becoming more human-like, so to speak. WaveNet has since been improved to work well enough for Google Assistant across all platforms. China Is Building a $2.1 Billion Industrial Park for AI Research. Artificial Intelligence Tech Will Arrive in Three Waves. DARPA: A Track Record of Innovation I’ve done a lot of writing and research recently about the bright future of AI: that it’ll be able to analyze human emotions, understand social nuances, conduct medical treatments and diagnoses that overshadow the best human physicians, and in general make many human workers redundant and unnecessary. 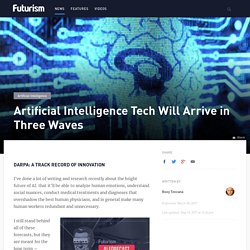 I still stand behind all of these forecasts, but they are meant for the long term – twenty or thirty years into the future. And so, the question that many people want answered is about the situation at the present. Right here, right now. Luckily, DARPA has decided to provide an answer to that question. DARPA is one of the most interesting US agencies. Recently, DARPA’s Information Innovation Office has released a new Youtube clip explaining the state of the art of AI, outlining its capabilities in the present – and considering what it could do in the future. We Need a Plan for When AI Becomes Smarter Than Us. In Brief There will come a time when artificial intelligence systems are smarter than humans. 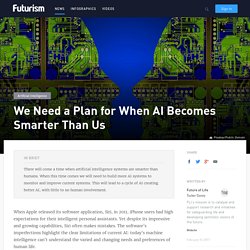 When this time comes we will need to build more AI systems to monitor and improve current systems. This will lead to a cycle of AI creating better AI, with little to no human involvement. When Apple released its software application, Siri, in 2011, iPhone users had high expectations for their intelligent personal assistants. Yet despite its impressive and growing capabilities, Siri often makes mistakes. However, as artificial intelligence advances, experts believe that intelligent machines will eventually – and probably soon – understand the world better than humans. If humans cannot understand and evaluate these machines, how will they control them? Paul Christiano, a Ph.D. student in computer science at UC Berkeley, has been working on addressing this problem.

There's An Invention That Will be the End of All Other Human Inventions. In Brief Artificial intelligence is already transforming the way people live their lives. 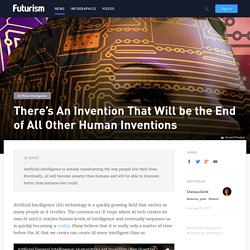 Eventually, AI will become smarter than humans and will be able to innovate better than humans ever could. 2015 in Review: The Year Artificial Intelligence Went Mainstream. The top AI breakthroughs of 2015. (credit: iStock) By Richard Mallah Courtesy of Future of Life Institute Progress in artificial intelligence and machine learning has been impressive this year. 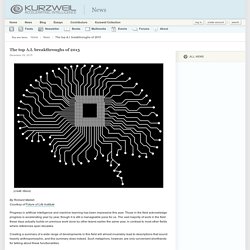 Those in the field acknowledge progress is accelerating year by year, though it is still a manageable pace for us. The vast majority of work in the field these days actually builds on previous work done by other teams earlier the same year, in contrast to most other fields where references span decades. These Robots Learn New Tasks by Watching YouTube. Video Learning Cornell researchers are using instructional videos off the Internet to teach robots the step-by-step instructions required to perform certain tasks. 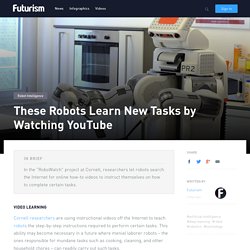 This ability may become necessary in a future where menial laborer robots – the ones responsible for mundane tasks such as cooking, cleaning, and other household chores – can readily carry out such tasks. Robots such as these will definitely be beneficial in assisting the elderly and the disabled, though it remains to be seen when (and if) they will truly become available for use. Hopefully, these early tests will help us make such determinations. The project is being called “RoboWatch” by the researchers. After viewing numerous videos for a certain task, the robot can take note of what it found common in all and create the necessary instructions based on that.

Jeff Hawkins Makes A Bold AI Claim - Thinking and Reasoning Computers in Five Years. RoboBrain: First Knowledge Engine for Robots. Memcomputers: Faster, More Energy-Efficient Devices That Work Like a Human Brain. Glass Fibers May Open Door to Neuromorphic Computing. In Brief Researchers have demonstrated how neural networks and synapses in the brain can be reproduced using special glass fibers made that are sensitive to light, known as chalcogenides. 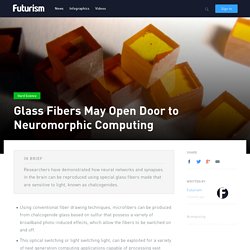 Using conventional fiber drawing techniques, microfibers can be produced from chalcogenide glass based on sulfur that possess a variety of broadband photo-induced effects, which allow the fibers to be switched on and off.This optical switching or light switching light, can be exploited for a variety of next generation computing applications capable of processing vast amounts of data in a much more energy-efficient manner. In the proposed optical version of this brain function, the changing properties of the glass act as the varying electrical activity in a nerve cell, and light provides the stimulus to change these properties.

Quantum Computing Could Advance Artificial Intelligence by Orders of Magnitude. In Brief Combining the vast processing power of quantum computers with cognitive computing systems like IBM's Watson will lead to huge advances in artificial intelligence. 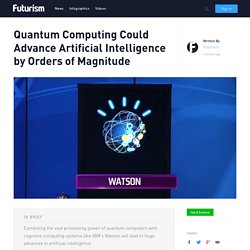 IBM’s Watson supercomputer first rose to prominence in 2011 when it became the first computer to beat human contestants at the US gameshow Jeopardy! IBM sticks Watson's brain into a friendly virtual assistant. In Brief Meet Amelia. She's a virtual assistant born out of a partnership between IPsoft and IBM's Watson. What It Is. Peering into the Future: AI and Robot brains.

If you arrange the groups in any order, the same enmity occurs. " See what the proponents of these words mean by them and why the old talmudic rabbis and jesuits are probably laughing their socks off. Artificial intelligence: two common misconceptions. Recent comments by Elon Musk and Stephen Hawking, as well as a new book on machine superintelligence by Oxford professor Nick Bostrom, have the media buzzing with concerns that artificial intelligence (AI) might one day pose an existential threat to humanity. Should we be worried? Let’s start with expert opinion. Watson. Stanford to Research the effects of Artificial Intelligence. What will intelligent machines mean for society and the economy in 30, 50 or even 100 years from now? That’s the question that Stanford University scientists are hoping to take on with a new project, the One Hundred Year Study on Artificial Intelligence (AI100).

FLI - Future of Life Institute. (If you have questions about this letter, please contact tegmark@mit.edu) Artificial intelligence. AI research is highly technical and specialized, and is deeply divided into subfields that often fail to communicate with each other.[5] Some of the division is due to social and cultural factors: subfields have grown up around particular institutions and the work of individual researchers.