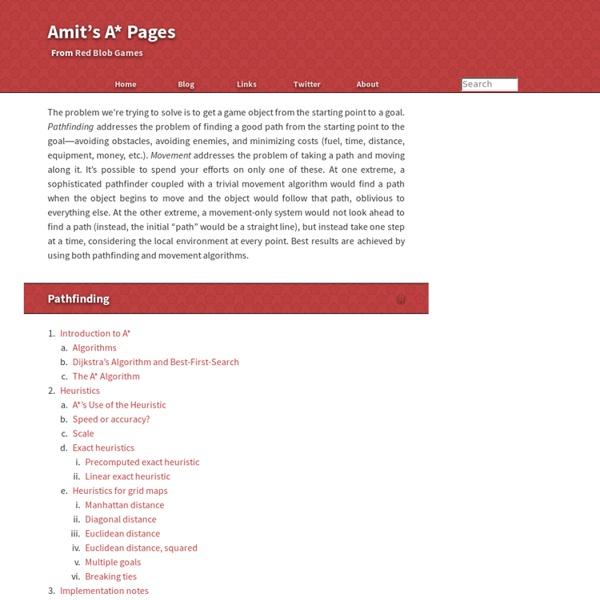 Introduction to A* Pathfinding If you're new here, you may want to subscribe to my RSS feed or follow me on Twitter. Thanks for visiting! This is a blog post by iOS Tutorial Team member Johann Fradj, a software developer currently full-time dedicated to iOS. He is the co-founder of Hot Apps Factory which is the creator of App Cooker. Learn how the A* Pathfinding Algorithm Works! Have you ever had a game where you wanted to make monsters or players move to a particular point, while avoiding walls and obstacles? If so, read this tutorial, and we’ll show you how you can do this with A* pathfinding! There are already several articles on A* pathfinding on the web, but most of them are for experienced developers who already know the basics. This tutorial takes the approach of covering the fundamentals from the ground up. Regardless of what programming language or platform you are using, you should find this tutorial helpful as it explains the algorithm in a language agnostic format. A Pathfinding Cat Simplifying the Search Area

java - Shortest path in 2d arrays A* Pathfinding for Beginners By Patrick Lester (Updated July 18, 2005) This article has been translated into Albanian, Chinese, Finnish, German, Greek, Korean, Polish, Portuguese, Romanian, Russian, Serbian, and Spanish. Other translations are welcome. See email address at the bottom of this article. The A* (pronounced A-star) algorithm can be complicated for beginners. While there are many articles on the web that explain A*, most are written for people who understand the basics already. This article does not try to be the definitive work on the subject. Finally, this article is not program-specific. But we are getting ahead of ourselves. Introduction: The Search Area Let’s assume that we have someone who wants to get from point A to point B. [Figure 1] The first thing you should notice is that we have divided our search area into a square grid. These center points are called “nodes”. Starting the Search We begin the search by doing the following: [Figure 2] Path Scoring where H can be estimated in a variety of ways. 1.

Recursion: Solving a Maze The Problem A robot is asked to navigate a maze. It is placed at a certain position (the starting position) in the maze and is asked to try to reach another position (the goal position). Positions in the maze will either be open or blocked with an obstacle. Positions are identified by (x,y) coordinates. At any given moment, the robot can only move 1 step in one of 4 directions. Go North: (x,y) -> (x,y-1) Go East: (x,y) -> (x+1,y) Go South: (x,y) -> (x,y+1) Go West: (x,y) -> (x-1,y) Note that positions are specified in zero-based coordinates (i.e., 0...size-1, where size is the size of the maze in the corresponding dimension). The robot can only move to positions without obstacles and must stay within the maze. The robot should search for a path from the starting position to the goal position (a solution path) until it finds one or until it exhausts all possibilities. Representation To make this problem more concrete, let's consider a maze represented by a matrix of characters. Algorithm

Breadth First Search: Shortest Reach : Challenge | Graph Theory | Algorithms | HackerRank Given an undirected graph consisting of nodes (labelled 1 to N) where a specific given node represents the start position and an edge between any two nodes is of length units in the graph. It is required to calculate the shortest distance from start position (Node S) to all of the other nodes in the graph. Note 1: If a node is unreachable , the distance is assumed as . Note 2: The length of each edge in the graph is units. The first line contains , denoting the number of test cases. First line of each test case has two integers , denoting the number of nodes in the graph and , denoting the number of edges in the graph. Constraints For each of test cases, print a single line consisting of space separated integers, denoting the shortest distances of the N-1 nodes from starting position . For unreachable nodes, print . The graph given in the test case is shown as : S denotes the node 1 in the test case and B,C and D denote 2,3 and 4. Node D is unreachable, hence -1 is printed (not Infinity).

jgrapht/jgrapht Maze Solving Algorithm – Practicing Backtracking | The Tokenizer Although it’s not directly connected to NLP, I decided to dedicate this post to a general algorithm called “Backtracking”. In simple words Backtracking is a general way to solve a problem by using a computer. The algorithm is considered “general” since it doesn’t describe how to solve a specific problem (like sorting numbers or searching for an element in a list), but it gives some high-level principles to solve many different problems. The main idea of Backtracking is to solve a problem by starting from point A and going through all the possible options/paths until reaching point B. When we find a path from A to B it means we found a solution and solved the problem! The general form of a Backtracking algorithm: The easiest way to implement a backtracking algorithm is by using recursion. First, We need to define three cases: Second, we just put our cases in this “template” (pseudo code): Example: Lets take this list of numbers: {3,4,1}, and try to sort them using Backtracking. Do and don’t do: