Artificial Intelligence Finally Entered Our Everyday World. Andrew Ng hands me a tiny device that wraps around my ear and connects to a smartphone via a small cable. 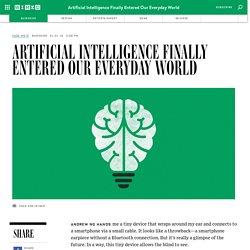 It looks like a throwback—a smartphone earpiece without a Bluetooth connection. But it’s really a glimpse of the future. In a way, this tiny device allows the blind to see. Ng is the chief scientist at Chinese tech giant Baidu, and this is one of the company’s latest prototypes. It’s called DuLight. Artificial intelligence is changing not only the way we use our computers and smartphones but the way we interact with the real world. DuLight is still in the earliest stages of development. Ng’s prototype relies on a technology called deep learning.

This same technology already is handling a wide range of other tasks within Baidu and US tech giants like Google, Facebook, and Microsoft. A neural net, you see, can help with many different modes of perception. All of this seems like science fiction. “Just like humans protect against Dr. Google's Game-Playing Algorithm Could Be the Future of AI. The gamer punches in play after endless play of the Atari classic Space Invaders. 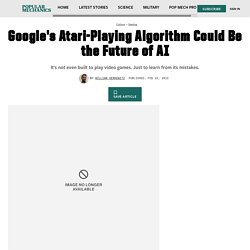 Though an interminable chain of failures, the gamer adapts the gameplay strategy to reach for the highest score. Scientists have created next generation data storage devices that mimic the memory of the human brain. The new technology could revolutionise the way we store data, and take scientists a step closer to creating a bionic brain. 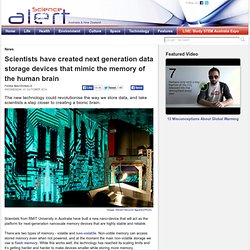 Scientists from RMIT University in Australia have built a new nano-device that will act as the platform for next-generation nanoscale memory devices that are highly stable and reliable. There are two types of memory - volatile and non-volatile. Non-voltile memory can access stored memory even when not powered, and at the moment the main non-volatile storage we use is flash memory. While this works well, the technology has reached its scaling limits and it’s getting harder and harder to make devices smaller while storing more memory.

But the Australian scientists have now created the platform for revolutionary new nanoscale devices that will allow computers to store significantly more data by mimicking human memory. The newly developed technology is one of the most promising platforms to create these structures, and can be used at room temperature. Ethical trap: robot paralysed by choice of who to save - 14 September 2014. Video: Ethical robots save humans Can a robot learn right from wrong? 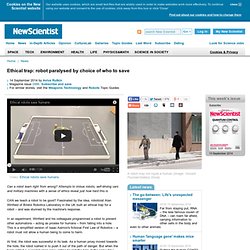 Attempts to imbue robots, self-driving cars and military machines with a sense of ethics reveal just how hard this is CAN we teach a robot to be good? Fascinated by the idea, roboticist Alan Winfield of Bristol Robotics Laboratory in the UK built an ethical trap for a robot – and was stunned by the machine's response. In an experiment, Winfield and his colleagues programmed a robot to prevent other automatons – acting as proxies for humans – from falling into a hole.

At first, the robot was successful in its task. Winfield describes his robot as an "ethical zombie" that has no choice but to behave as it does. As robots integrate further into our everyday lives, this question will need to be answered. But robots designed for military combat may offer the beginning of a solution. Arkin says that designing military robots to act more ethically may be low-hanging fruit, as these rules are well known. 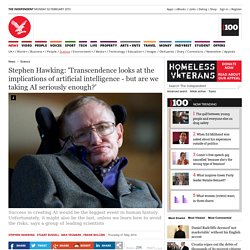 Recent landmarks such as self-driving cars, a computer winning at Jeopardy! And the digital personal assistants Siri, Google Now and Cortana are merely symptoms of an IT arms race fuelled by unprecedented investments and building on an increasingly mature theoretical foundation. Such achievements will probably pale against what the coming decades will bring. The potential benefits are huge; everything that civilisation has to offer is a product of human intelligence; we cannot predict what we might achieve when this intelligence is magnified by the tools that AI may provide, but the eradication of war, disease, and poverty would be high on anyone's list.

Success in creating AI would be the biggest event in human history. Loading gallery. How Much Longer Before Our First AI Catastrophe? As I distinctly recall, some speculated that the Stock Market crash of 1987, was due to high frequency trading by computers, and mindful of this possibility, I think regulators passed laws to prevent computers from trading in that specific pattern again. 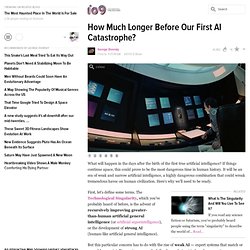 I remember something vague about about "throttles" being installed in the trading software that kick in whenever they see a sudden, global spike in the area in which they are trading. These throttles where supposed to slow down trading to a point where human operators could see what was happening and judge whether there was an unintentional feedback loop happening. This was 1987. I don't know if regulators have mandated other changes to computer trading software in the various panics and spikes since then. But yes, I definitely agree this is very good example where narrow AI got us into trouble.

These are all examples of narrow machine intelligence. Obviously no system is going to be perfect.