Researchers are already building the foundation for sentient AI. Google's AI is Learning to Make Other AI. Training Your Replacement Imagine the conflicted feelings of the machine learning expert who is creating artificial intelligence (AI) that they know will one day, possibly very soon, be able to create better AI than them. 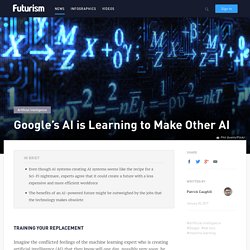 It’s the new age’s way of holding on to the time-honored tradition of having to train your own replacement. Machine learning experts are currently being paid a premium wage due to their limited numbers and the high demand for their valuable skills. However, with the dawn of software that is “learning to learn,” those days may be numbered. The most prolific minds in AI research from groups such as Google Brain, OpenAI, DeepMind, and university research departments at the nation’s most prestigious tech schools are developing machine-learning systems that can create machine-learning systems. 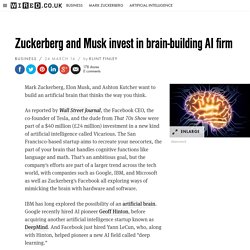 As reported by Wall Street Journal, the Facebook CEO, the co-founder of Tesla, and the dude from That 70s Show were part of a $40 million (£24 million) investment in a new kind of artificial intelligence called Vicarious. The San Francisco-based startup aims to recreate your neocortex, the part of your brain that handles cognitive functions like language and math.

That's an ambitious goal, but the company's efforts are part of a larger trend across the tech world, with companies such as Google, IBM, and Microsoft as well as Zuckerberg's Facebook all exploring ways of mimicking the brain with hardware and software. IBM has long explored the possibility of an artificial brain. Google recently hired AI pioneer Geoff Hinton, before acquiring another artificial intelligence startup known as DeepMind. Facebook didn't take part in the latest round. Microsoft wants to out-think Google Brain with Project Adam. We're entering a new age of artificial intelligence. 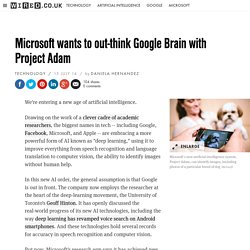 Drawing on the work of a clever cadre of academic researchers, the biggest names in tech -- including Google, Facebook, Microsoft, and Apple -- are embracing a more powerful form of AI known as "deep learning," using it to improve everything from speech recognition and language translation to computer vision, the ability to identify images without human help. In this new AI order, the general assumption is that Google is out in front. The company now employs the researcher at the heart of the deep-learning movement, the University of Toronto's Geoff Hinton. It has openly discussed the real-world progress of its new AI technologies, including the way deep learning has revamped voice search on Android smartphones. And these technologies hold several records for accuracy in speech recognition and computer vision.

Ray Kurzweil Plans to Create a Mind at Google—and Have It Serve You. How to Make a Mind. Can nonbiological brains have real minds of their own? 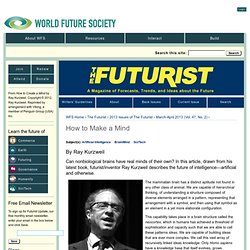 In this article, drawn from his latest book, futurist/inventor Ray Kurzweil describes the future of intelligence—artificial and otherwise. Google’s artificial intelligence mastermind responds to Elon Musk’s fears. We can get along fine, at least for a few decades, according to Demis Hassabis. 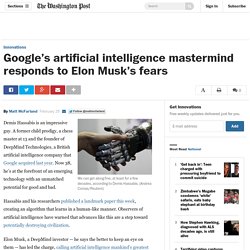 (Andrea Comas/Reuters) Demis Hassabis is an impressive guy. How DARPA Is Making a Machine Mind out of Memristors. Artificial intelligence has long been the overarching vision of computing, always the goal but never within reach. 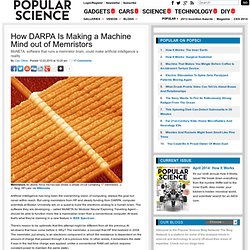 But using memristors from HP and steady funding from DARPA, computer scientists at Boston University are on a quest to build the electronic analog to a human brain. The software they are developing – called MoNETA for Modular Neural Exploring Traveling Agent – should be able to function more like a mammalian brain than a conventional computer. Artificial intelligence program that learns like a child.

Artificial intelligence programs may already be capable of specialized tasks like flying planes, winning Jeopardy, and giving you a hard time in your favorite video games, but even the most advanced offerings are no smarter than a typical four-year-old child when it comes to broader insights and comprehension. 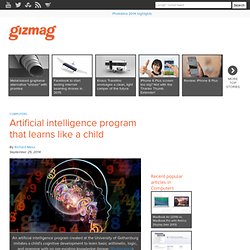 It makes sense, then, that researchers at the University of Gothenburg have developed a program that imitates a child's cognitive development. "We have developed a program that can learn, for example, basic arithmetic, logic, and grammar without any pre-existing knowledge," says Claes Strannegård. Starting from a set of simple and broad definitions meant to provide a cognitive model, this program gradually builds new knowledge based on previous knowledge. From that new knowledge it then draws new conclusions about rules and relations that govern the world, and it identifies new patterns to connect the insight to. The process is similar to how children develop intelligence. Share. "Tell me Dave" robot learns simply by people talking to it. Many robots today are able to follow verbal instructions. 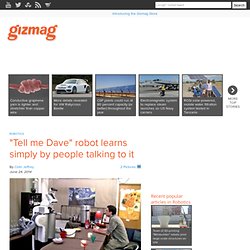 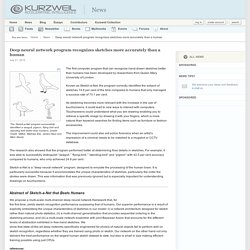 (credit: Credit: QMUL, Mathias Eitz, James Hays and Marc Alexa) The first computer program that can recognize hand-drawn sketches better than humans has been developed by researchers from Queen Mary University of London. Known as Sketch-a-Net, the program correctly identified the subject of sketches 74.9 per cent of the time compared to humans that only managed a success rate of 73.1 per cent. As sketching becomes more relevant with the increase in the use of touchscreens, it could lead to new ways to interact with computers. Touchscreens could understand what you are drawing enabling you to retrieve a specific image by drawing it with your fingers, which is more natural than keyword searches for finding items such as furniture or fashion accessories.

The research also showed that the program performed better at determining finer details in sketches. Deep Learning for AI. Scientists have developed a prototype for self-replicating robots. Robotics researchers have constructed small cubes that with no exterior moving parts are able to propel themselves forward, climb and jump on top of each other and snap together to form arbitrary shapes. 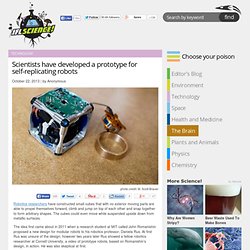 The cubes could even move while suspended upside down from metallic surfaces. The idea first came about in 2011 when a research student at MIT called John Romanishin proposed a new design for modular robots to his robotics professor, Daniela Rus. Robot learns, thinks and acts by itself #DigInfo. Robot taught to think for itself. A robot that uses its own reasoning when faced with a task it hasn't completed before has been unveiled by the Hasegawa Group at the Tokyo Institute of Technology. The robot uses a technology called SOINN (Self-Organising Incremental Neural Network). Osamu Hasegawa is Associate Professor at the lab and one of the system's designers. He says: "So far, robots, including industrial robots, have been able to do specific tasks quickly and accurately. But if their environment changes slightly, robots like that can't respond.

" Robot learns to recognise itself in mirror. 23 August 2012Last updated at 12:27 ET Is that me? A robot named Nico could soon pass a landmark test - recognising itself in a mirror. Such self-awareness would represent a step towards the ultimate goal of thinking robots. Nico, developed by computer scientists at Yale University, will take the test in the coming months. The ultimate aim is for Nico to use a mirror to interpret objects around it, in the same way as humans use a rear-view mirror to look for cars. "It is a spatial reasoning task for the robot to understand that its arm is on it not on the other side of the mirror," Justin Hart, the PhD student leading the research told BBC News.

Robot learns ‘self-awareness’ Who’s that good-looking guy? Nico examines itself and its surroundings in the mirror. (Credit: Justin Hart / Yale University ) “Only humans can be self-aware.” A Robot With A Simple Form of Consciousness. Synopsis A year ago, researchers endowed the walking robot Hector with a simple form of consciousness. Their new research goes a step further and enables Hector to see himself as others see him. Summary Both biologists are involved in further developing and enhancing walking robot Hector’s software. Non-Human Consciousness Exists Say Experts. Now What? Non-Human Consciousness Exists Say Experts. Understanding consciousness: Researchers advocate for more scientific research on consciousness. Synthetic intelligence.