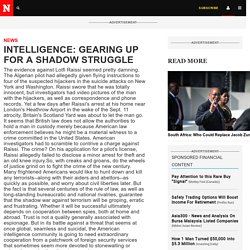 The Algerian pilot had allegedly given flying instructions to four of the suspected hijackers in the suicide attacks on New York and Washington. Raissi swore that he was totally innocent, but investigators had video pictures of the man with the hijackers, as well as correspondence and phone records. Yet a few days after Raissi's arrest at his home near London's Heathrow Airport in the wake of the Sept. 11 atrocity, Britain's Scotland Yard was about to let the man go.

It seems that British law does not allow the authorities to hold a man in custody merely because American law enforcement believes he might be a material witness to a crime committed in the United States. American investigators had to scramble to contrive a charge against Raissi. Marcus Dwayne Robertson: Radical Imam set free after judge acquits him of recruiting men for terrorist organisations. A former US marine turned radical Islamic preacher who had been incarcerated in a Florida prison for years on terrorism-related charges has been set free by a federal judge who said there were insufficient grounds to keep him behind bars. 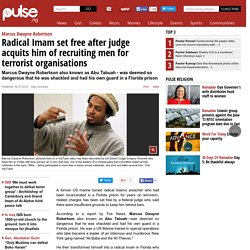 According to a report by Fox News, Marcus Dwayne Robertson also known as Abu Tabuah—was deemed so dangerous that he was shackled and had his own guard in a Florida prison. He was a US Marine trained in special operations who later became a leader of an infamous and murderous New York gang named "Ali Baba and the 40 Thieves. " He then transformed himself into a radical imam in Florida who influenced young men and sent them overseas to fight for terrorist groups. Robertson was kept at John E. Polk Correctional Facility in Seminole County on gun and tax fraud convictions. play Robertson successfully radicalized 36 prisoners, including a white supremacist (Daily Mail) Robertson denied being involved in terrorist activities in court.

The University Bookman: Churchill After the War. Winter 2013 At the end of The Gathering Storm, the first volume of his history of the Second World War, Winston Churchill memorably reflected on the moment he assumed office as British Prime Minister on May 10, 1940. 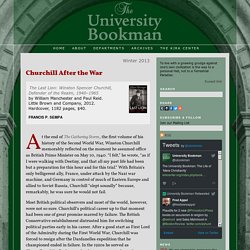 “I felt,” he wrote, “as if I were walking with Destiny, and that all my past life had been but a preparation for this hour and for this trial.” With Britain’s only belligerent ally, France, under attack by the Nazi war machine, and Germany in control of much of Eastern Europe and allied to Soviet Russia, Churchill “slept soundly” because, remarkably, he was sure he would not fail. Celebrating Romani Resistance Day. Image courtesy of ternYpe, the International Roma Youth Network. 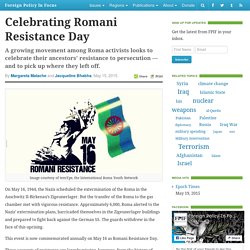 Our Parties, Part One. President Woodrow Wilson, a progressive icon . . . 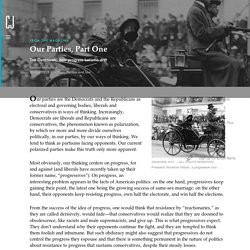 Our parties are the Democrats and the Republicans as electoral and governing bodies, liberals and conservatives in ways of thinking. Increasingly, Democrats are liberals and Republicans are conservatives, the phenomenon known as polarization, by which we more and more divide ourselves politically, in our parties, by our ways of thinking. Our Parties, Part Two. The intellectual founder of the GOP Our parties, as liberal and conservative, oppose each other over progress in the drive toward ever-greater equality. 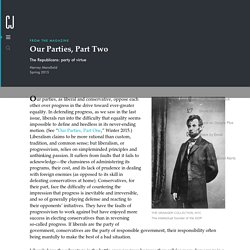 A face in the crowd: P.J. O’Rourke edition. After posting the video of Our Lady of the Trigger expressing herself at the UMass Amherst event featuring Christina Hoff Sommers, I happened onto P.J. 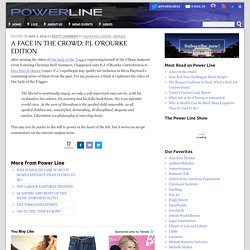 O’Rourke’s introduction to Give War A Chance (1992). P.J.’s apothegm may qualify for inclusion in Steve Hayward’s continuing series of blasts from the past. Bright flash of light marks incredible moment life begins when sperm meets egg. Hot Robot At SXSW Says She Wants To Destroy Humans. Obama takes a photo with American delegation in Cuba. Obama Proudly Poses with Racist Mass-Murderer.

While in Havana yesterday president Obama carefully arranged a photo-op with the huge mural of Che Guevara as backdrop. 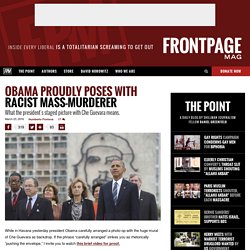 If the phrase “carefully arranged” strikes you as rhetorically “pushing the envelope,” I invite you to watch this brief video for proof. “Better” still, this mural—the biggest of the celebrated (by many liberals) mass-murderer, racist and warmonger -- adorns the headquarters for Cuba’s Ministry of the Interior, which is to say: the headquarters for Cuba's KGB- and STASI-trained secret police. Nothing could be more fitting. In 1959, with the help of Soviet GRU agents, the man President Obama felt a burning need to arrange as his backdrop helped found, train and indoctrinate Cuba’s secret police. 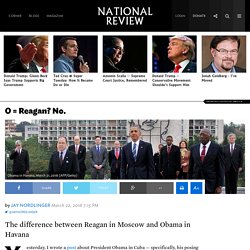 Obama was all smiles. I regarded these pictures as unseemly, grotesque. And then a strange thing happened: I was attacked by people on the left. This occurred on Twitter. #CALLBRUSSELS. By choosing not to lead, Obama has left the West dangerously exposed. Mr Obama is talking about his world leadership, and a very odd sort of talk it is. 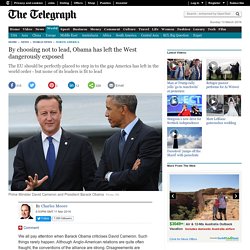 He keeps emphasising how he has chosen not to lead. In 2012, he declared that President Assad’s use of chemical weapons in Syria would be “a red line” for the United States. Assad duly crossed that line, killing hundreds, but then Obama decided to back away from his own threat. Were the Mysterious Bog People Human Sacrifices? Sometime around 60 A.D., a man was led into a marsh outside Cheshire, England to be killed. He was in his mid-twenties, stood about 5’ 7’’ tall, and had a trimmed beard, mustache, and brown hair. Except for an armband made out of fox fur, he was naked. It’s likely that he was accompanied, and restrained, by two or more individuals. The details of his death make for grisly reading. Sultan Knish: #FeeltheBreadLine. After Bernie Sanders visited the Marxist Sandanista regime in Nicaragua on a propaganda tour, he argued that the bread lines in major cities were a good thing.

“American journalists talk about how bad a country is, that people are lining up for food. Sultan Knish: America Doesn't Have a Gun Problem, It Has a Democrat Problem. America's mass shooting capital isn't somewhere out west where you can get a gun at the corner store. It's in Obama's own hometown. Chicago is America's mass shooting capital. Speaking Honestly About Militant Islam. Cops stop car with tree wedged in grille, charge driver; photos go viral. The Roselle police report may not have captured all the color of the incident. It did, however, get to the heart of it. "Stopped for driving with a large tree embedded in the front grille," the report reads. Photos taken by officers in January of the 2004 Lincoln with its arboreal accessory have gone viral since the images were posted on the Roselle Police Department's new Facebook page last week. The Trojan War — The Preliminaries, The Course of the War, The Fall of Troy, and The Returns.

Summary King Priam ruled in the wealthy, fortified city of Troy. The Warriors of the Rainbow Prophecy. Newspaper Morals. The St. Valentine’s Day Massacre and Al Capone—Excerpt from Get Capone. St. Political Correctness Is Dying, Even in France. CNN Hounds Bernie Sanders on V.A. Scandal: 'You Sound Like a Lawyer Defending the Hospital' The Veterans Scandal on Bernie Sanders’s Watch. While he was on the Senate Veterans Affairs Committee, Sanders ‘believed in government, and he believed in it to a fault,’ a congressional source said—and it prevented him from fixing the VA.

Policing the Future. Undermine anti-terrorism policy. Apparently this union is working to ensure that the government’s efforts to identify potential radicalization in young people is thwarted. Marijuana 'Dabbing' Is 'Exploding onto the Drug-Use Scene' The Democrats’ Filthy Flint Water. Daniel Greenfield, a Shillman Journalism Fellow at the Freedom Center, is a New York writer focusing on radical Islam.