How I implemented iPhone X’s FaceID using Deep Learning in Python. One of the most discussed features of the new iPhone X is the new unlocking method, the successor of TouchID: FaceID. 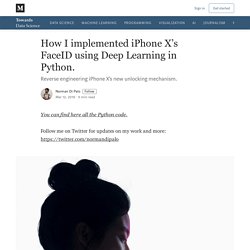 Having created a bezel-less phone, Apple had to develop a new method to unlock the phone in a easy and fast way. While some competitors continued using a fingerprint sensor, placed in a different position, Apple decided to innovate and revolutionize the way we unlock a phone: by simply looking at it. Thanks to an advanced (and remarkably small) front facing depth-camera, iPhone X in able to create a 3D map of the face of the user. In addition, a picture of the user’s face is captured using an infrared camera, that is more robust to changes in light and color of the environment. Using deep learning, the smartphone is able to learn the user face in great detail, thus recognizing him\her every time the phone is picked up by its owner. Practical Applications of Deep Learning: Build a DIY Smart Security Camera Using the Intel® Movidius™ Neural Compute Stick - Intel AI. Enhancing my ordinary IP security cameras with AI. Artificial Intelligence is quickly becoming an important ingredient for IoT projects’ success, a requirement for unlocking its full potential and providing a competitive edge to those that embrace it. 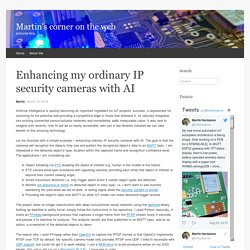 AI naturally integrates into existing connected sensor/actuator networks and immediately adds measurable value. It was hard to imagine until recently, that AI will be so easily accessible, with just a few libraries installed we can take benefit of this amazing technology. Let me illustrate with a simple example – enhancing ordinary IP security cameras with AI. The goal is that the cameras will recognize the objects they see and publish the recognized object’s data to an MQTT topic. I am interested in the detected object’s type, location within the captured frame and recognition confidence level. The project relies on image classification with deep convolutional neural networks using the darkflow library. What are the Wolfram Language's relative strengths for machine learning? - Mathematica Stack Exchange.

I have worked in pattern classification and machine learning for decades, taught the subject in a number of elite academic departments, am writing the third edition of Pattern classification by Duda, Hart and Stork as well as its companion computer manual in Mathematica, and am an expert Mathematica programmer, a solid Matlab programmer, but very weak in R and Python and have no experience with Julia. 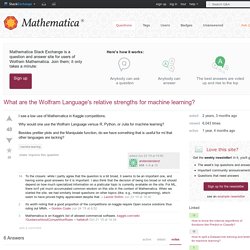 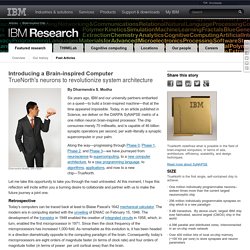 Modha Six years ago, IBM and our university partners embarked on a quest—to build a brain-inspired machine—that at the time appeared impossible. Today, in an article published in Science, we deliver on the DARPA SyNAPSE metric of a one million neuron brain-inspired processor. The chip consumes merely 70 milliwatts, and is capable of 46 billion synaptic operations per second, per watt–literally a synaptic supercomputer in your palm. Along the way—progressing through Phase 0, Phase 1, Phase 2, and Phase 3—we have journeyed from neuroscience to supercomputing, to a new computer architecture, to a new programming language, to algorithms, applications, and now to a new chip—TrueNorth. Let me take this opportunity to take you through the road untraveled. Retrospective Today’s computers can be traced back at least to Blaise Pascal’s 1642 mechanical calculator.

InMoov. The breve Simulation Environment. What is breve? 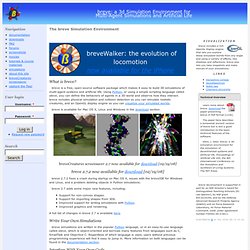 Breve is a free, open-source software package which makes it easy to build 3D simulations of multi-agent systems and artificial life. Using Python, or using a simple scripting language called steve, you can define the behaviors of agents in a 3D world and observe how they interact. breve includes physical simulation and collision detection so you can simulate realistic creatures, and an OpenGL display engine so you can visualize your simulated worlds. breve is available for Mac OS X, Linux and Windows in the download section. breveCreatures screensaver 2.7 now available for download [02/19/08] breve 2.7.2 now available for download [02/19/08] breve 2.7.2 fixes a crash during startup on Mac OS X, issues with the breveIDE for Windows and Linux, and a problem deleting objects in Python simulations. breve 2.7 adds some major new features, including: Support for non-convex shapes.

Write Your Own Simulations Interface With Your Own Code Feedback and Bug Reports About the Author Links. Recluze. Lisp is my favourite language. 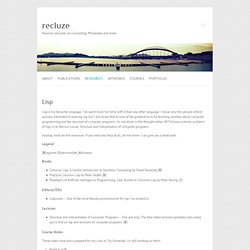 I’ve spent more fun-time with it than any other language. I know very few people who’re actually interested in learning lisp but I also know that it’s one of the greatest tools for teaching newbies about computer programming and the structure of computer programs. I’m not alone in this thought either. MIT follows scheme (a dialect of lisp) in its famous course, Structure and Interpretation of Computer programs.