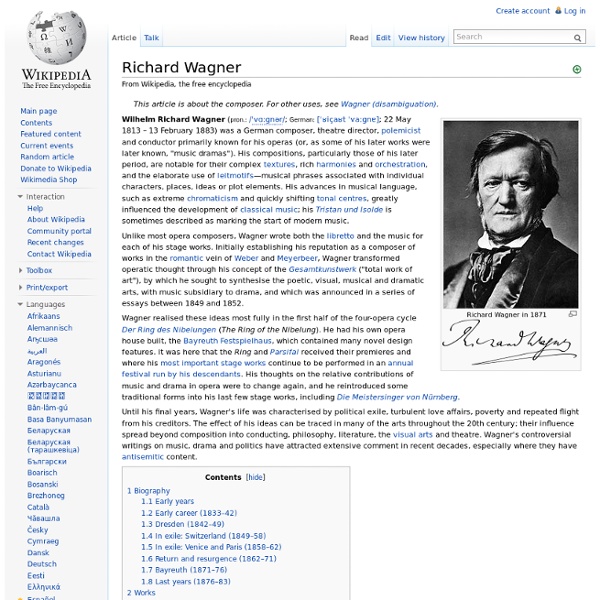 Wilhelm Richard Wagner (/ˈvɑːɡnər/; German: [ˈʁiçaʁt ˈvaːɡnɐ]; 22 May 1813 – 13 February 1883) was a German composer, theatre director, polemicist, and conductor who is primarily known for his operas (or, as some of his later works were later known, "music dramas"). Unlike most opera composers, Wagner wrote both the libretto and the music for each of his stage works. Initially establishing his reputation as a composer of works in the romantic vein of Weber and Meyerbeer, Wagner revolutionised opera through his concept of the Gesamtkunstwerk ("total work of art"), by which he sought to synthesise the poetic, visual, musical and dramatic arts, with music subsidiary to drama, and which was announced in a series of essays between 1849 and 1852. Wagner realised these ideas most fully in the first half of the four-opera cycle Der Ring des Nibelungen (The Ring of the Nibelung). Wagner had his own opera house built, the Bayreuth Festspielhaus, which embodied many novel design features.

Jacques Offenbach Offenbach in the 1860s Jacques Offenbach (20 June 1819 – 5 October 1880) was a German-born French composer, cellist and impresario of the romantic period. He is remembered for his nearly 100 operettas of the 1850s–1870s and his uncompleted opera The Tales of Hoffmann. He was a powerful influence on later composers of the operetta genre, particularly Johann Strauss, Jr. and Arthur Sullivan.

Galileo Galilei Galileo Galilei (Italian pronunciation: [ɡaliˈlɛːo ɡaliˈlɛi]; 15 February 1564[3] – 8 January 1642), often known mononymously as Galileo, was an Italian physicist, mathematician, engineer, astronomer, and philosopher who played a major role in the scientific revolution during the Renaissance. His achievements include improvements to the telescope and consequent astronomical observations and support for Copernicanism. Galileo has been called the "father of modern observational astronomy",[4] the "father of modern physics",[5][6] the "father of science",[6][7] and "the father of modern science".[8] Giuseppe Verdi Biography[edit] Early life[edit] Verdi's statue in the Piazza G. Johannes Kepler Johannes Kepler (German: [ˈkʰɛplɐ]; December 27, 1571 – November 15, 1630) was a German mathematician, astronomer, and astrologer. A key figure in the 17th century scientific revolution, he is best known for his laws of planetary motion, based on his works Astronomia nova, Harmonices Mundi, and Epitome of Copernican Astronomy. These works also provided one of the foundations for Isaac Newton's theory of universal gravitation. During his career, Kepler was a mathematics teacher at a seminary school in Graz, Austria, where he became an associate of Prince Hans Ulrich von Eggenberg.

Franz Liszt Franz Liszt, T.O.S.F. (German: [fʁant͡s lɪst]; Hungarian: Liszt Ferencz; October 22, 1811 – July 31, 1886), in modern use Liszt Ferenc[n 1] (Hungarian pronunciation: [list ˈfɛrɛnt͡s]); from 1859 to 1867 officially Franz Ritter von Liszt,[n 2] was a 19th-century Hungarian[1][2][3] composer, virtuoso pianist, conductor, teacher and Franciscan tertiary. Liszt gained renown in Europe during the early nineteenth century for his virtuosic skill as a pianist. He was said by his contemporaries to have been the most technically advanced pianist of his age, and in the 1840s he was considered by some to be perhaps the greatest pianist of all time.

Nuremberg Castle Nuremberg Castle - Sinwell Tower in the middle left, Luginsland Tower in the far right part of the picture Nuremberg Castle (German: Nürnberger Burg) is a historical building on a sandstone rock in the north of the historical city of Nuremberg, Bavaria, Germany. It comprises three sections: the Imperial castle ("Kaiserburg"), some buildings of the Burgraves of Nuremberg ("Burggrafenburg"), and the municipal buildings of the Imperial City at the eastern site ("Reichsstädtische Bauten"). The castle together with the City walls of Nuremberg is meant to be one of Europes most considerable medieval war systems.[1] History[edit] The courtyard with Heidenturm (Heathen Tower), Kaiserkapelle (Emperor's Chapel) and Tiefer Brunnen (Deep Well).

Robert Schumann Robert Schumann[1] (8 June 1810 – 29 July 1856) was a German composer and influential music critic. He is widely regarded as one of the greatest composers of the Romantic era. Schumann left the study of law, intending to pursue a career as a virtuoso pianist. Ptolemy Background[edit] Engraving of a crowned Ptolemy being guided by the muse Astronomy, from Margarita Philosophica by Gregor Reisch, 1508. Although Abu Ma'shar believed Ptolemy to be one of the Ptolemies who ruled Egypt after the conquest of Alexander the title ‘King Ptolemy’ is generally viewed as a mark of respect for Ptolemy's elevated standing in science.

Frédéric Chopin Photograph of Chopin by Bisson, c. 1849 Frédéric François Chopin (/ˈʃoʊpæn/; French pronunciation: ​[fʁe.de.ʁik ʃɔ.pɛ̃]; 22 February or 1 March 1810 – 17 October 1849), born Fryderyk Franciszek Chopin,[n 1] was a Romantic-era Polish composer. A child prodigy, Chopin was born in what was then the Duchy of Warsaw. He grew up in Warsaw, which after 1815 became part of Congress Poland, and there completed his musical education and composed many of his works before leaving Poland, aged 20, less than a month before the outbreak of the November 1830 Uprising. Both in his native Poland and beyond, Chopin's music, his status as one of music's earliest 'superstars', his association (if only indirect) with political insurrection, his amours and his early death have made him, in the public consciousness, a leading symbol of the Romantic era. His works remain popular, and he has been the subject of numerous films and biographies of varying degrees of historical accuracy.

Zoroastrianism Zoroastrianism /ˌzɒroʊˈæstriənɪzəm/, /-ˌzɔr/, also called Zarathustraism, Mazdaism and Magianism, is an ancient semi-dualistic monotheist religion of Greater Iran. Much like the Roman religion for Rome, it was adopted in differing forms as the generally inclusive overarching state religion[1] of the Achaemenid Empire and subsequent Parthian and Sasanian empires, lending it immense prestige in ancient times. As a result, much of Zoroastrianism, including leading characteristics like Messianism were inherited by or otherwise influenced later religious systems, including Second Temple Judaism, Gnosticism, Christianity and Islam.[2] It was gradually marginalized or otherwise absorbed by Islam from the 7th century onwards with the decline of the Sassanid Empire.[3] Recent estimates place the current number of Zoroastrians at around 2.6 million.[4]

Felix Mendelssohn Portrait of Mendelssohn by the English miniaturist James Warren Childe (1778–1862), 1839 Jakob Ludwig Felix Mendelssohn Bartholdy (German: [ˈjaːkɔp ˈluːtvɪç ˈfeːlɪks ˈmɛndl̩szoːn baʁˈtɔldi]; 3 February 1809 – 4 November 1847), born and widely known as Felix Mendelssohn,[n 1] was a German composer, pianist, organist and conductor of the early Romantic period. A grandson of the philosopher Moses Mendelssohn, Felix Mendelssohn was born into a prominent Jewish family, although initially he was raised without religion and was later baptised as a Reformed Christian. Mendelssohn was recognised early as a musical prodigy, but his parents were cautious and did not seek to capitalise on his talent. Early success in Germany, where he also revived interest in the music of Johann Sebastian Bach, was followed by travel throughout Europe.

Trance music A trance refers to a state of hypnotism and lessened consciousness. This drifting sensation is portrayed in the genre by mixing many layers and rhythms to create build and release. For example, a characteristic of virtually all trance songs is the soft mid-song breakdown,[3][5] beginning with and occurring after the orchestration is broken down and the rhythm tracks fade out rapidly, leaving the melody, atmospherics, or both to stand alone for anywhere from a few seconds to a few minutes. Another common characteristic would be the use of vocals often sung by a female voice ranging from mezzo-soprano to soprano sometimes without verse/chorus structure. This is sometimes catogorized into a sub-genre, vocal trance. Less often, the female vocals may be in a grand, soaring, or operatic style, which has been described as "ethereal female leads floating amongst the synths".[9][10]