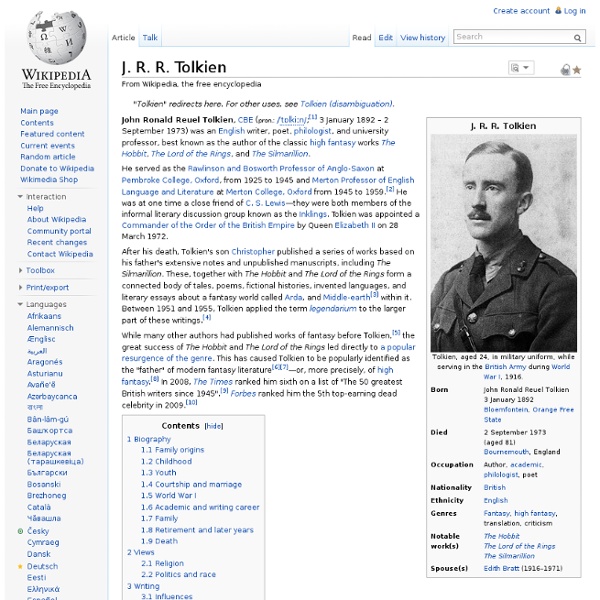 John Ronald Reuel Tolkien, CBE (/ˈtɒlkiːn/ TOL-keen;[a] 3 January 1892 – 2 September 1973) was an English writer, poet, philologist, and university professor, best known as the author of the classic high fantasy works The Hobbit, The Lord of the Rings, and The Silmarillion. He served as the Rawlinson and Bosworth Professor of Anglo-Saxon and Fellow of Pembroke College, Oxford, from 1925 to 1945 and Merton Professor of English Language and Literature and Fellow of Merton College, Oxford from 1945 to 1959.[1] He was at one time a close friend of C. S. Lewis—they were both members of the informal literary discussion group known as the Inklings. Tolkien was appointed a Commander of the Order of the British Empire by Queen Elizabeth II on 28 March 1972. In 2008, The Times ranked him sixth on a list of "The 50 greatest British writers since 1945".[7] Forbes ranked him the 5th top-earning "dead celebrity" in 2009.[8] Biography Family origins Most of Tolkien's paternal ancestors were craftsmen.

The Lord of the Rings by JRR Tolkien reviewed on Fantasy Book Review Reader reviews Have Your Say Andrew Luck from USA Started the book and it is great. The Subtle Knife Plot summary[edit] Lyra revisits Dr. Malone the next day, but after accepting a ride from the well-dressed Sir Charles Latrom, she discovers that Sir Charles has stolen her alethiometer and she asks Will to help her retrieve it.

Shadow World Shadow World is a high-fantasy campaign setting situated on the fictional planet of Kulthea. Originally produced for the Rolemaster role-playing game system, the game setting is owned by Iron Crown Enterprises (often referred to as I.C.E.). It is currently maintained by the primary author of the setting, Terry K. Amthor of Eidolon Studio (who also holds the trademark for Shadow World, and copyrights for non-gaming fiction related to the world). Themes[edit] Shadow World deals with a number of topics, including the path of the hero, relatively normal people being caught up in events much larger than themselves, and the interplay of religion, racism, sexism, and homophobia as tools of social control.

Dying-and-rising god The methods of death can be diverse, the Norse Baldr mistakenly dies by the arrow of his blind brother, the Aztec Quetzalcoatl sets himself on fire after over-drinking, and the Japanese Izanami dies of a fever.[2][15] Some gods who die are also seen as either returning or bringing about life in some other form, in many cases associated with a vegetation deity related to a staple.[2][16] The very existence of the category "dying-and-rising-god" was debated throughout the 20th century, and the soundness of the category was widely questioned, given that many of the proposed gods did not return in a permanent sense as the same deity.[1][2][17] By the end of the 20th century, scholarly consensus had formed against the reasoning used to suggest the category, and it was generally considered inappropriate from a historical perspective.[2][18] Overview[edit] Odin whispering to a dead Baldr as he is to be sent out to sea

Scott Pilgrim A film adaptation of the series titled Scott Pilgrim vs. the World starring actor Michael Cera in the title role was released in August 2010. A videogame of the same name developed by Ubisoft for PlayStation Network and Xbox Live Arcade was released the same month. Development[edit] O'Malley wanted to write a shōnen-style comic book series, but initially he had only read one series, Ranma 1/2; in the early 2000s North America did not yet have a significant Japanese comic book industry.

Rohan Rohan was the territory of the Rohirrim, a people of herdsmen and farmers on the northern borders of Gondor in Middle-earth. Well-known for their horses and cavalry, they were Gondor's most important ally. [edit] Background In the 1200s of the Third Age, the Kings of Gondor made close alliances with the Northmen of Rhovanion, a people akin to the Three Houses of the Edain (later the Dúnedain) from the First Age.

The Amber Spyglass The Amber Spyglass is the third and final novel in the His Dark Materials series, written by English author Philip Pullman, and published in 2000. The Amber Spyglass won the 2001 Whitbread Book of the Year award, a British literature award, making it the first children's novel to receive the honour.[1] It was named Children's Book of the Year at the 2001 British Book Awards, and was also longlisted for the Man Booker Prize, again the first time this had happened to a children's book.[2] Plot[edit] At the end of The Subtle Knife, Marisa Coulter captured Lyra.

Spacemaster Space Master is a science fiction role-playing game produced by Iron Crown Enterprises, written by Kevin Barrett, developed by Kevin Barrett and Terry K. Amthor. It is an adaptation of, and mostly compatible with, the Rolemaster Fantasy Roleplaying system, and as such any perceived failings/strengths of the latter also apply to Space Master. Spacemaster is available in two editions, namely Spacemaster 2nd Edition (analogous and broadly compatible with Rolemaster 2nd Edition and Rolemaster Classic) and Spacemaster Privateers (analogous and compatible with Rolemaster Standard System and Rolemaster Fantasy Role Playing). Theophany Theophany (from Ancient Greek (ἡ) θεοφάνεια theophaneia,[1] meaning "appearance of god") refers to the appearance of a deity to a human or other being.[2][3][4] This term has been used to refer to appearances of the gods in the ancient Greek and Near Eastern religions. While the Iliad is the earliest source for descriptions of theophanies in the Classical tradition (and they occur throughout Greek mythology), probably the earliest description of a theophany is in the Epic of Gilgamesh.[5] The term theophany has acquired a specific usage for Christians and Jews with respect to the Bible: It refers to the manifestation of God to man; the sensible sign by which the presence of God is revealed.

V for Vendetta Publication history[edit] When the publishers cancelled Warrior in 1985 (with two completed issues unpublished due to the cancellation), several companies attempted to convince Moore and Lloyd to let them publish and complete the story. In 1988, DC Comics published a ten-issue series that reprinted the Warrior stories in colour, then continued the series to completion. The first new material appeared in issue No. 7, which included the unpublished episodes that would have appeared in Warrior No. 27 and No. 28. Tony Weare drew one chapter ("Vincent") and contributed additional art to two others ("Valerie" and "The Vacation"); Steve Whitaker and Siobhan Dodds worked as colourists on the entire series.

William Shakespeare William Shakespeare (/ˈʃeɪkspɪər/;[1] 26 April 1564 (baptised) – 23 April 1616)[nb 1] was an English poet, playwright, and actor, widely regarded as the greatest writer in the English language and the world's pre-eminent dramatist.[2] He is often called England's national poet, and the "Bard of Avon".[3][nb 2] His extant works, including collaborations, consist of approximately 38 plays,[nb 3] 154 sonnets, two long narrative poems, and a few other verses, some of uncertain authorship. His plays have been translated into every major living language and are performed more often than those of any other playwright.[4] Shakespeare produced most of his known work between 1589 and 1613.[6][nb 4] His early plays were primarily comedies and histories, which are regarded as some of the best work ever produced in these genres. Many of his plays were published in editions of varying quality and accuracy during his lifetime. Life