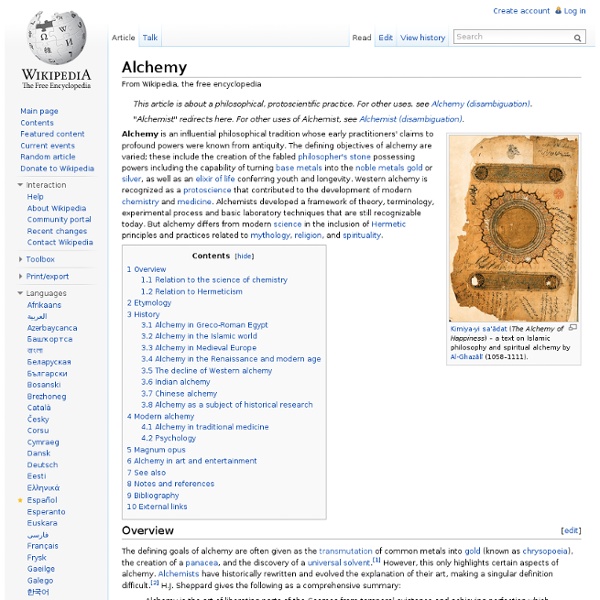 The Emerald Tablet, a key text of Western Alchemy, in a 17th-century edition Alchemy is an influential philosophical tradition whose practitioners have, from antiquity, claimed it to be the precursor to profound powers. The defining objectives of alchemy are varied, but historically have typically included one or more of the following goals: the creation of the fabled philosopher's stone; the ability to transform base metals into the noble metals (gold or silver); and development of an elixir of life, which would confer youth and longevity. Overview[edit] Alchemy is the art of liberating parts of the Cosmos from temporal existence and achieving perfection which, for metals is gold, and for man, longevity, then immortality and, finally, redemption. Modern discussions of alchemy are generally split into an examination of its exoteric practical applications and its esoteric aspects. Relation to the science of chemistry[edit] Scientific apparatus in the alchemist's workshop, 1580 Q.

Alchemy, Theory, Science, Symbolism, Ancient Wisdom, Egypt, and Influences Much of Alchemy is misunderstood and shrouded in mystery within magickal and fraternal orders, it is our goal to unravel some of the aspects which remain hidden behind conventional history. On youtube by: LuxorMedia Alchemy - Sacred Secrets Revealed Part 1/8Origin of Alchemy Egypt, Magical Forms, Thoth - Hermes Trismegistus, Stella Malediction, Emerald Tablet, Occult Order, and Teachings. Alchemy - Sacred Secrets Revealed Part 2/8 Royal Society national academy of science in the United Kingdom The Royal Society, formally The Royal Society of London for Improving Natural Knowledge,[1] is a learned society and the United Kingdom's national academy of sciences. Founded on 28 November 1660, it was granted a royal charter by King Charles II as "The Royal Society".[1] It is the oldest national scientific institution in the world.[2] The society fulfils a number of roles: promoting science and its benefits, recognising excellence in science, supporting outstanding science, providing scientific advice for policy, fostering international and global co-operation, education and public engagement.

Gulliver's Travels 1726 novel by Jonathan Swift Gulliver's Travels, or Travels into Several Remote Nations of the World. In Four Parts. Free ebooks On August 26 2020, the Project Gutenberg website underwent some major changes. These changes had been previewed since early 2020, and visitors to the old site were invited to try the new site, including giving input via a brief survey. The old site is no longer available. If you found yourself on this page unexpectedly, it is because an old page was redirected here.

Ernst Mayr German-American evolutionary biologist His theory of peripatric speciation (a more precise form of allopatric speciation which he advanced), based on his work on birds, is still considered a leading mode of speciation, and was the theoretical underpinning for the theory of punctuated equilibrium, proposed by Niles Eldredge and Stephen Jay Gould. Mayr is sometimes credited with inventing modern philosophy of biology, particularly the part related to evolutionary biology, which he distinguished from physics due to its introduction of (natural) history into science. Biography[edit] Mayr was the second son of Helene Pusinelli and Dr.

Aleister Crowley: His Elite Ties and His Legacy The man who revelled in being called “Great Beast 666″ and dubbed by the press as the “Wickedest Man in History” was more than a theatrical occultist: Aleister Crowley is at the heart of one of the most influential movements of the 20th and 21st centuries. He also had ties with some of the world’s most powerful figures, even working with the British Intelligence Agency MI-5. This article describes the life and works of occultist Aleister Crowley and looks at his ties with the world elite which facilitated the propagation of the Thelema. Although he is considered to be the most influential occultist of the 20th century and was recognized by the BBC as the 73rd “greatest Briton of all time”, most people have never heard of Aleister Crowley. The English occultist, mystic and ceremonial magician is incredibly popular in some circles (occultists, artists, celebrities, etc.) but completely unknown to the average person.

Thomas Aquinas Thomas Aquinas (; Italian: Tommaso d'Aquino, lit. 'Thomas of Aquino'; 1225 – 7 March 1274) was an Italian[10][11] Dominican friar, philosopher, Catholic priest, and Doctor of the Church. An immensely influential philosopher, theologian, and jurist in the tradition of scholasticism, he is also known within the latter as the Doctor Angelicus and the Doctor Communis.[12] The name Aquinas identifies his ancestral origins in the county of Aquino in present-day Lazio, Italy. He was the foremost classical proponent of natural theology and the father of Thomism; of which he argued that reason is found in God.