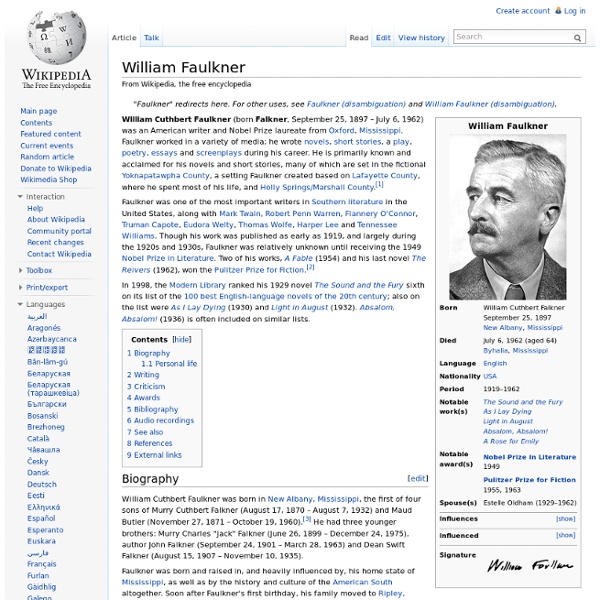 Biography[edit] Faulkner was born William Cuthbert Falkner in New Albany, Mississippi, the first of four sons of Murry Cuthbert Falkner (August 17, 1870 – August 7, 1932) and Maud Butler (November 27, 1871 – October 19, 1960).[3] He had three younger brothers: Murry Charles "Jack" Falkner (June 26, 1899 – December 24, 1975), author John Falkner (September 24, 1901 – March 28, 1963) and Dean Swift Falkner (August 15, 1907 – November 10, 1935). Faulkner was born and raised in the state of Mississippi, which had a great influence on him, as did the history and culture of the American South altogether. Soon after Faulkner's first birthday, his family moved to Ripley, Mississippi from New Albany. His family, particularly his mother Maud, his maternal grandmother Lelia Butler, and Caroline Barr (the black woman who raised him from infancy) crucially influenced the development of Faulkner's artistic imagination. As a schoolchild, Faulkner had much success early on. Personal life[edit]

Antony C. Sutton Antony Cyril Sutton (February 14, 1925 – June 17, 2002) was a British and American economist, historian, and writer. Biography[edit] Sutton studied at the universities of London, Göttingen, and California, and received his D.Sc. from the University of Southampton. He was an economics professor at California State University, Los Angeles and a research fellow at Stanford University's Hoover Institution from 1968 to 1973. In 1973, Sutton published a popularized, condensed version of the three volumes called National Suicide: Military Aid to the Soviet Union and was thereby[citation needed] forced out of the Hoover Institution. In his book Between Two Ages: America's Role in the Technetronic Era (New York: Viking Press;1970), Zbigniew Brzezinski wrote: For impressive evidence of Western participation in the early phase of Soviet economic growth, see Antony C. In his three-volume detailed account of Soviet Purchases of Western Equipment and Technology ... Education[edit] Employers[edit]

The Stranger (novel) The Outsider or The Stranger (French: L’Étranger) is a novel by Albert Camus published in 1942. Its theme and outlook are often cited as exemplars of Camus's philosophy of the absurd and existentialism, though Camus personally rejected the latter label.[citation needed] The titular character is Meursault, an indifferent Algerian ("a citizen of France domiciled in North Africa, a man of the Mediterranean, an homme du midi yet one who hardly partakes of the traditional Mediterranean culture")[2] who, after attending his mother's funeral, apathetically and seemingly irrationally kills an Arab man whom he recognises in French Algiers. The story is divided into two parts: Meursault's first-person narrative view before and after the murder, respectively. In January 1955, Camus said, "I summarized The Stranger a long time ago, with a remark I admit was highly paradoxical: 'In our society any man who does not weep at his mother's funeral runs the risk of being sentenced to death.'

Louis Menand Louis Menand (born January 21, 1952) is an American writer and academic, best known for his book The Metaphysical Club (2001), an intellectual and cultural history of late 19th and early 20th century America. Life and career[edit] Menand was born in Syracuse, New York, and raised around Boston, Massachusetts. His mother was a historian, who wrote a biography of Samuel Adams. His father, Louis Menand III, taught political science at the Massachusetts Institute of Technology. A graduate of Pomona College, Menand attended Harvard Law School for one year (1973-1974) before he left to earn a Ph.D. in English from Columbia University in 1980. He thereafter taught at Princeton University and held staff positions at The New Republic and The New Yorker. He published his first book, Discovering Modernism: T. He is the Robert M. and Anne T. Bibliography[edit] Books[edit] Discovering Modernism: T. Reviews[edit] Menand, Louis (14 March 2011). References[edit] External links[edit] Interviews[edit]

Carroll Quigley Carroll Quigley (/ˈkwɪɡli/; November 9, 1910 – January 3, 1977) was an American historian and theorist of the evolution of civilizations. He is noted for his teaching work as a professor at Georgetown University, for his academic publications, and for his research on secret societies.[1][2] Life and career[edit] Quigley was born in Boston, and attended Harvard University, where he studied history and earned B.A, M.A., and Ph.D. degrees. From 1941 until 1972, he taught a two-semester course at Georgetown on the development of civilizations. In addition to his academic work, Quigley served as a consultant to the U.S. Quigley retired from Georgetown in June 1976 and died the following year.[1] Major conclusions[edit] Inclusive diversity[edit] Quigley asserts that any intolerance or rigidity in the religious practices of the West are aberrations from its nature of inclusivity and diversity. Institutionalization and the fall of civilizations[edit] Weapons and democracy[edit] Style[edit]

Orhan Pamuk Pamuk in his personal writing space Ferit Orhan Pamuk (generally known simply as Orhan Pamuk; born 7 June 1952) is a Turkish novelist, screenwriter, academic and recipient of the 2006 Nobel Prize in Literature. One of Turkey's most prominent novelists,[1] his work has sold over eleven million books in sixty languages,[2] making him the country's best-selling writer.[3] As well as the Nobel Prize in Literature (the first Nobel Prize to be awarded to a Turkish citizen), Pamuk is the recipient of numerous other literary awards. My Name Is Red won the 2002 Prix du Meilleur Livre Étranger, 2002 Premio Grinzane Cavour and 2003 International IMPAC Dublin Literary Award. The European Writers' Parliament came about as a result of a joint proposal by Pamuk and José Saramago.[5] In 2005, Pamuk was put on trial in Turkey after he made a statement regarding the Armenian Genocide in the Ottoman Empire. Early life[edit] Work[edit] My Name Is Red[edit] Nothing changed in my life since I work all the time.

John Dos Passos He is best known for his critically praised U.S.A. trilogy which consisted of the novels The 42nd Parallel (1930), 1919 (1932), and The Big Money (1936). In 1998, the Modern Library ranked the U.S.A. Trilogy 23rd on its list of the 100 best English-language novels of the 20th century. By the 1950s his political views had changed dramatically, and in the 1960s, he actively campaigned for presidential candidates Barry Goldwater and Richard M. Nixon. An artist as well as a novelist, Dos Passos created cover art for his books, was influenced by the modernist movements in 1920s Paris, and continued to paint throughout his lifetime. Early life[edit] The younger Dos Passos received a good education at The Choate School (now Choate Rosemary Hall) in Wallingford, Connecticut in 1907 under the name John Roderigo Madison, then traveling with a private tutor on a six-month tour of France, England, Italy, Greece, and the Middle East to study the masters of classical art, architecture, and literature.

How Far from Fukushima Will Fallout Pose a Health Risk? As the condition of the stricken Fukushima Daiichi nuclear power station in Japan continues to deteriorate, nuclear safety experts, government regulators and health physicists are keeping close watch on the situation to determine the danger—both real and hypothetical—that the incident poses to people near the plant. Japanese authorities have carved the area around Fukushima into two zones, recommending that individuals within 20 kilometers of the plant evacuate and that anyone living 20 to 30 kilometers from the plant take shelter and stay put. Nevertheless, after initially supporting that action the U.S. Nuclear Regulatory Commission (NRC) took the dramatic step March 16 of recommending that Americans within 80 kilometers of Fukushima Daiichi evacuate the area. U.S. federal guidelines set a much smaller standard perimeter for radiation hazards, leaving some puzzled as to why U.S. authorities would recommend such a large evacuation zone for Japan. The Japan Broadcasting Corp.