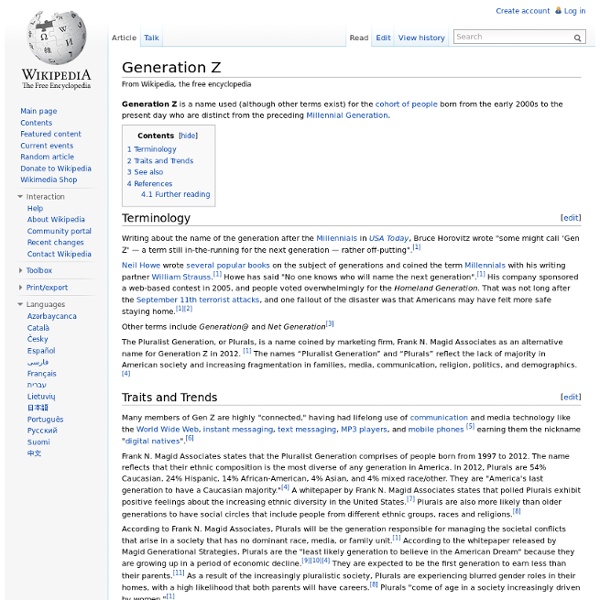 Terminology[edit] USA Today sponsored an online contest for readers to choose the name of the next generation after the Millennials. In the article, Bruce Horovitz wrote that some might call the term "Generation Z" rather "off-putting" and a name that is "still in-the-running" for the next generation. The article proposed some alternate names including: iGeneration, Gen Tech, Gen Wii, Net Gen, Digital Natives, Gen Next, Post Gen.[1][3] In 2013, Jeanine Poggi reported in Ad Age that Nickelodeon channel is looking to serve a new breed of kids born after 2005 who it dubs "post-millennials".[2] "Scholars Generation" was proposed by a writer at A Time to Succeed coalition who "works to ensure that all children in the nation’s high-poverty communities have better learning time in school".[4] Authors William Strauss and Neil Howe wrote several popular books on the subject of generations. Plurals is a name coined by marketing firm Frank N. Traits and trends[edit] See also[edit] References[edit] Related:  wikipedia 2

Baby boomers United States birth rate (births per 1000 population). The red segment from 1946 to 1961 is the postwar baby boom.[1] Baby boomers are people born during the demographic Post–World War II baby boom between the years 1946 and 1964. According to the U.S. Census Bureau,[2] the term "baby boomer" is also used in a cultural context. Therefore, it is impossible to achieve broad consensus of a precise date definition, even within a given territory. Baby boomers are associated with a rejection or redefinition of traditional values; however, many commentators have disputed the extent of that rejection, noting the widespread continuity of values with older and younger generations. The term Generation Jones has sometimes been used to distinguish those born from 1957 onward from the earlier Baby Boomers.[7][8] Definition[edit] The phrase baby boom has been used since the late twentieth century to refer to a noticeable temporary increase in the birth rate. Characteristics[edit] Cultural identity[edit]

100 Websites You Should Know and Use Entertainment Meet David Peterson, who developed Dothraki for Game of Thrones There are seven different words in Dothraki for striking another person with a sword. Among them: “hliziﬁkh,” a wild but powerful strike; “hrakkarikh,”a quick and accurate strike; and “gezrikh,” a fake-out or decoy strike. But you won’t find these words in George R. Culture My Year of TED: How 54 talks changed a life By Kylie Dunn What do you get when you cross a 39-year-old perfectionist with 54 TED Talks and far more honesty than any person probably needs to experience?

Generation X Generation X, commonly abbreviated to Gen X, is the generation born after the Western Post–World War II baby boom. Demographers, historians and commentators use beginning birth dates from the early 1960s to the early 1980s. Origin and etymology[edit] Hungarian photographer Robert Capa initially referred to post-World War II youth as "Generation X" Douglas Coupland popularized the term "Generation X" in a novel about young adults and their lifestyles in the late 1980s. The term Generation X was coined by the Magnum photographer Robert Capa in the early 1950s. Characteristics and definition[edit] Gen X is the generation born after the Western post-World War II baby boom describing a generational change from the Baby Boomers.[8][9][10][11][12][13] In a 2012 article for the Joint Center for Housing Studies of Harvard University, George Masnick wrote that the "Census counted 82.1 million" Gen Xers in the U.S. The U.S. Economy[edit] Entrepreneurship[edit] United Kingdom[edit] Canada[edit] Notes[edit]

Augmented Grocery Shopping: How a Korean grocer moved virtual shopping to the subway It’s the kind of experiment that seems like it was hatched for a satirical spoof video, but the results were anything but funny. Home Plus, the 2nd largest grocery chain in South Korea formerly known as Tesco, needed to increase their market share without building more stores. The idea they had was simple and elegant, albeit completely offbeat and somewhat insane. “Let the store come to the people.” They created virtual stores to make grocery shopping something that could be done without while performing other duties such as waiting in the subway. As you can see by the video, the results have been extraordinary with over 10,000 people visiting the online Home Plus mall using smartphones.

Middle age Middle age is the period of age beyond young adulthood but before the onset of old age . Various attempts have been made to define this age, which is around the third quarter of the average life span of human beings . Definitions [ edit ] According to Collins Dictionary , this is "... usually considered to occur approximately between the ages of 40 and 60". [ 1 ] The current edition of the Oxford English Dictionary gives a similar definition but with a shorter span: "The period of life between young adulthood and old age, now usually regarded as between about forty-five and sixty." Aging [ edit ] Middle-aged adults often show visible signs of aging such as loss of skin elasticity and graying of the hair . Both male and female fertility declines with advancing age. [ 3 ] [ 4 ] Advanced maternal age increases the risk of a child being born with some disorders such as Down syndrome . See also [ edit ] References [ edit ] ^ middle age . External links [ edit ]

[CES 2010] RCA Airnergy Charger Harvests Electricity From WiFi Signals By Evan Ackerman This thing is, seriously, the highlight of CES for me (so far) this year. 3D TVs and eBook readers are fine, but there’s nothing amazing about them. The Airnergy Charger is amazing. This little box has, inside it, some kind of circuitry that harvests WiFi energy out of the air and converts it into electricity. The Airnergy has a battery inside it, so you can just carry it around and as long as you’re near some WiFi, it charges itself. Here is the really, really unbelievable part: RCA says that the USB charger will be available this summer for $40, and a battery with the WiFi harvesting technology will be available soon after. We didn’t think you’d believe all this, so we made RCA explain it all on video:

Ageing Ageing (British English) or aging (American English) is the accumulation of changes in a person over time.[1] Ageing in humans refers to a multidimensional process of physical, psychological, and social change. Some dimensions of ageing grow and expand over time, while others decline. Reaction time, for example, may slow with age, while knowledge of world events and wisdom may expand. Research shows that even late in life, potential exists for physical, mental, and social growth and development.[2] Ageing is an important part of all human societies reflecting the biological changes that occur, but also reflecting cultural and societal conventions. Ageing is among the largest known risk factors for most human diseases.[3] Roughly 100,000 people worldwide die each day of age-related causes.[4] Age is measured chronologically, and a person's birthday is often an important event. Population ageing is the increase in the number and proportion of older people in society. Senescence[edit]

9 Implants that make human healthy body even more useful Here’s a list of 9 ways you can modify your body to be even more useful, from bionic implants to portable power generators. 1. RFID Chips – A nice and easy way to start out with body hacking is to implant an RFID chip into you. 2. 3. 4. 5. 6. 7. 8. 9. Source