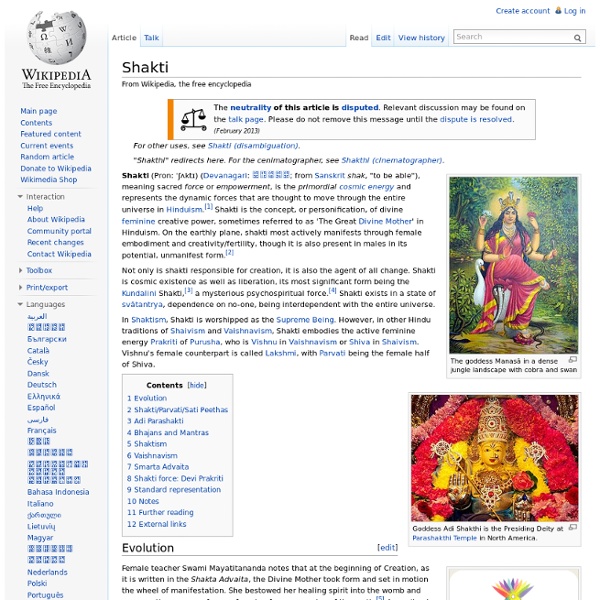 The goddess Manasa in a dense jungle landscape with a cobra and a swan. Shakti (Sanskrit pronunciation: [ˈʃʌktɪ]) (Devanagari: शक्ति; from Sanskrit shak, "to be able"), meaning "Power" or "empowerment," is the primordial cosmic energy and represents the dynamic forces that are thought to move through the entire universe in Hinduism.[1] Shakti is the concept, or personification, of divine feminine creative power, sometimes referred to as 'The Great Divine Mother' in Hinduism. On the earthly plane, shakti most actively manifests through female embodiment and creativity/fertility, though it is also present in males in its potential, unmanifest form.[2] Not only is Shakti responsible for creation, it is also the agent of all change. In Shaktism and Shaivism, Shakti is worshipped as the Supreme Being. Evolution[edit] A goddess statue at the Jain temple of Sravanbelagola, India Shakti/Parvati/Sati Peethas[edit] Hindu Goddess. Adi Parashakti[edit] Bhajans and Mantras[edit] Translation: Shaktism[edit] Related:  Just So: An Odyssey into the Cosmic Web of Connection, Play, and True Pleasure

Shiva Shiva (Śiva; /ˈʃɪvə/ listen meaning "The Auspicious One"), also known as Mahadeva ("Great God"), is a popular Hindu deity and is considered to be the Supreme God within Shaivism, one of the three most influential denominations in Hinduism.[1][2] Shiva is regarded as one of the primary forms of God, such as one of the five primary forms of God in the Smarta tradition,[1] and "the Destroyer" or "the Transformer"[3] among the Trimurti, the Hindu Trinity of the primary aspects of the divine. Shiva is also regarded as the patron god of yoga and arts.[4][5][6] Shiva, as we know him today, shares features with the Vedic god Rudra. Etymology and other names[edit] Shiva absorbed in meditation, as depicted commonly in Hinduism The Sanskrit word Shiva (Devanagari: शिव, śiva) comes from Shri Rudram Chamakam of Taittiriya Samhita (TS 4.5, 4.7) of Krishna Yajurveda. The Tamil word Sivan, Tamil: சிவன் ("Fair Skinned") could have been derived from the word sivappu. The Pashupati seal[edit] Rudra[edit]

Sacred Prostitutes Table of Contents | Poetry | Opinion | Fiction | Nonfiction | Columns | Shorts | Art | Cosmic Connections diana rose hartmann "Cloud People" by Joe Ben Mention the Sacred Whore to most people and you'll get raised eyebrows or disgusted grimaces. Many of us believe that prostitution is all about money for street hookers, fame for Hollywood starlets, or security for suburban housewifes. Prophetic texts, rituals, and icons are called sacred, even particular mountains or rivers are considered sacred, but whores? Sexually empowered women are called bitches, dykes, ball-busters, etc., by both sexes. Jungian psychologist Nancy Qualls-Corbett describes the Holy Whore as "a woman, who, through ritual or psychological development, has come to know the spiritual side of her sexuality, her true Eroticism, and lives this out according to her individual circumstances." The term "sacred whore" is not oxymoronic. Today these ideas are not completely lost. Vestal Virgins and Sex Magick In the Beginning

Rotation A sphere rotating about an axis A rotation is a circular movement of an object around a center (or point) of rotation. A three-dimensional object can always be rotated around an infinite number of imaginary lines called rotation axes (/ˈæksiːz/ AK-seez). Mathematics[edit] Rotation of a planar figure around a point All rigid body movements are rotations, translations, or combinations of the two. A rotation is simply a progressive radial orientation to a common point. Rotations around the x, y and z axes are called principal rotations. In flight dynamics, the principal rotations are known as yaw, pitch, and roll (known as Tait–Bryan angles). Astronomy[edit] In astronomy, rotation is a commonly observed phenomenon. Another consequence of the rotation of a planet is the phenomenon of precession. Rotation and revolution[edit] Retrograde rotation[edit] Most planets in our solar system, including Earth, spin in the same direction as they orbit the Sun. Physics[edit] Cosmological principle[edit] . . .

Shakti Back to Home Page or Contents Page or Goddess and Witchcraft or Index Shakti Shakti (or Sakti) is the Tantric title for the Great Goddess (Devi), realized as a sexual partner and as the innermost animating soul of man or god, like the Greek Psyche, Roman Anima, Gnostic Sophia, and the Kabbalistic Shekina, all based on the Skati. Jung declared her to be the figure known as My Lady Soul: "Every mother and every beloved is forced to become the carrier and embodiment of this omnipresent and ageless image, which corresponds to the deepest reality in man." Shakti is translated "Cosmic Energy." (see Soul of the World) She implies "power, ability, capacity, strength prowess; regal power; power of composition, poetic power, genius; the power or signification of a word or term; the power inherent in cause to produce its necessary effect…[S]hakti is the female organ; shakti is the active power of a deity and is regarded, spiritually and mythologically, as his goddess-consort and queen." Sources:

Sacred prostitution Sacred prostitution, temple prostitution, or religious prostitution is a sexual ritual consisting of sexual intercourse or other sexual activity performed in the context of religious worship, perhaps as a form of fertility rite and divine marriage (hieros gamos). Scholars have long considered such practices to be customary in the ancient world; however, more recent scholarship has cast doubts on this picture, based on doubts about the reliability of ancient sources.[1] Some scholars[who?] prefer the term "sacred sex" to sacred prostitution, in cases where a payment for services was not involved. Ancient Near East[edit] In the Ancient Near East along the Tigris and Euphrates rivers there were many shrines and temples or "houses of heaven" dedicated to various deities. The foulest Babylonian custom is that which compels every woman of the land to sit in the temple of Aphrodite and have intercourse with some stranger once in her life. Sacred marriage[edit] In the Hebrew Bible[edit] Asia[edit]

Yantra Sri Yantra by Harish Johari using traditional colors Yantra (यन्त्र) (Sanskrit) (literally "machine, contraption"[1]) is a mystical diagram, mainly from the Tantric traditions of the Indian religions. They are used for the worship of deities in temples or at home; as an aid in meditation; used for the benefits given by their supposed occult powers based on Hindu astrology and tantric texts. They are also used for adornment of temple floors, due mainly to their aesthetic and symmetric qualities. Specific yantras are traditionally associated with specific deities. Representations of the yantra in India have been considered to date back to 11,000-10,000 years BP.[1] The Baghor stone, found in an upper-paleolithic context in the Son River valley, is considered the earliest example[2] by Sharma, who was involved in the excavation of the stone. Usage and meaning[edit] Yantras can be on a flat surface or three dimensional. Structural elements and symbolism[edit] Mantra Color Bindu Triangle Hexagram

Vedic period The Vedic period (or Vedic age) was a period in history during which the Vedas, the oldest scriptures of Hinduism, were composed. The time span of the period is uncertain. Philological and linguistic evidence indicates that the Rigveda, the oldest of the Vedas, was composed roughly between 1700 and 1100 BCE, also referred to as the early Vedic period.[1] The end of the period is commonly estimated to have occurred about 500 BCE, and 150 BCE has been suggested as a terminus ante quem for all Vedic Sanskrit literature. Transmission of texts in the Vedic period was by oral tradition alone,[3] and a literary tradition set in only in post-Vedic times. After the end of the Vedic period, the Mahajanapadas period in turn gave way to the Maurya Empire (from ca. 320 BCE), the golden age of classical Sanskrit literature. Map of northern India in the later Vedic age. History Early Vedic Period (1500–1000 BCE) Later Vedic period (1000–500 BCE) Second urbainsation Political organisation Economy Culture

Nerve plexus A nerve plexus is a plexus (branching network) of intersecting nerves. A nerve plexus is composed of afferent and efferent fibers that arise from the merging of the anterior rami of spinal nerves and blood vessels. There are five spinal nerve plexuses, except in the thoracic region, as well as other forms of autonomic plexuses, many of which are a part of the enteric nervous system. The nerves that arise from the plexuses have both sensory and motor functions. Spinal plexuses[edit] The following table shows the nerves that arise from each spinal plexus as well as the spinal level each plexus arises from. Cervical plexus[edit] The Cervical plexus is formed by the ventral rami of the upper four cervical nerves and the upper part of fifth cervical ventral ramus. Brachial plexus[edit] Anatomical illustration of the Brachial plexus with areas of roots, trunks, divisions and cords marked. Lumbar plexus[edit] Sacral plexus[edit] Coccygeal plexus[edit] Autonomic plexuses[edit] Sources[edit]

Shakti - Power and Femininity in Indian Art Long ago, there reigned a mighty king named Ila. Once while hunting, he came upon a grove where Shiva was making love with Parvati, and surprise of surprises, Shiva had taken the form of a woman to please her. Everything in the woods, even the trees had become female, and as he approached even King Ila himself was transformed into a woman! Shiva laughed out aloud and told him to ask for any boon except that of masculinity. Thus says the Shaktisangama Tantra: Woman is the creator of the universe, the universe is her form; woman is the foundation of the world, she is the true form of the body. In woman is the form of all things, of all that lives and moves in the world. No wonder even the most powerful of gods, like Shiva above, crave to enter the feminine form, hoping to acquire at least some of her glorious power. According to the Devi-Mahatmya: By you this universe is borne, By you this world is created, O Devi, by you it is protected. 1). The Yoni 'Aho! The Independent Image of the Goddess

Related:
Related:  Just So: An Odyssey into the Cosmic Web of Connection, Play, and True Pleasure