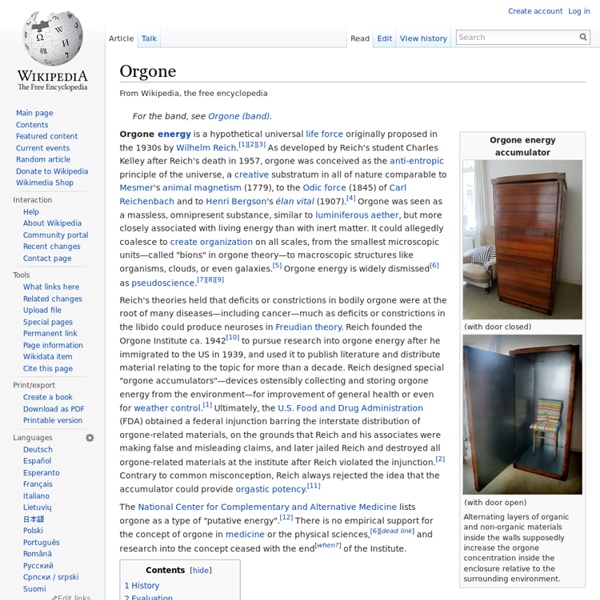 Orgone energy accumulator (with door closed) (with door open) Alternating layers of organic and non-organic materials inside the walls supposedly increase the orgone concentration inside the enclosure relative to the surrounding environment. Reich's theories held that deficits or constrictions in bodily orgone were at the root of many diseases—including cancer—much as deficits or constrictions in the libido could produce neuroses in Freudian theory. Reich founded the Orgone Institute ca. 1942[10] to pursue research into orgone energy after he immigrated to the US in 1939, and used it to publish literature and distribute material relating to the topic for more than a decade. The National Center for Complementary and Alternative Medicine lists orgone as a type of "putative energy".[12] There is no empirical support for the concept of orgone in medicine or the physical sciences,[6][dead link] and research into the concept ceased with the end[when?] History[edit] Evaluation[edit] William S.

Mental Heuristics Page A heuristic is a "rule-of-thumb", advice that helps an AI program or human think and act more efficiently by directing thinking in an useful direction. Some of these heuristics are age-old wisdom, bordering on cliche, but most are actually helpful. If you want something done, do it yourself Comment: Obviously true, and doing it is usually very good for your self esteem. Never procrastinate anything you can do right now Comment: Very powerful. When you have several things you could be doing and don't know which to do: Just do any one of them! Comments: If you cannot decide between two or more possibilities, then there is a good chance that the differences don't matter. Always assume that you will succeed Comments: If you don't expect to succeed in an endeavor, then you will not do your best and will not notice possible solutions, while if you feel that you will eventually succeed you will concentrate all your power at the problem. If you can't find a solution, change the rules.

The Other Schools of Thought: Magnetism and etheric fields Although seemingly contradictory to the popular opinion of the masses, the apparently empty space all around us is far from without substance or use. Air is not simply just a source of oxygen, an empty space for inhabiting, a condition of climate or weather, or a space in which gases and such can feel free to operate within: it is a primary factor in the make up of life and existence as we know it, a contributory factor in; occult health agenda's/concerns and the mediation of thoughts, feelings, invisible natural laws and electro magnetic transmissions. Research into the technologies of HAARP will show you that these very signals are now known to be picked up upon by the brain; thus the brain is fully cable of receiving transmissions through the airwaves and acting upon them subconsciously. When taking an occult view point, one with a belief in the spirit realm could relate to the concept of magnetism and understand how things we can not see may not be entirely indivisible.

Villisca, Iowa Villisca is a city in Montgomery County, Iowa, United States. The population was 1,252 at the 2010 census. It is most notable for the unsolved axe murders that took place in the town during the summer of 1912. Geography[edit] Villisca is located at WikiMiniAtlas According to the United States Census Bureau, the city has a total area of 1.90 square miles (4.92 km2), all of it land.[1] Demographics[edit] 2010 census[edit] There were 525 households of which 30.5% had children under the age of 18 living with them, 48.6% were married couples living together, 10.3% had a female householder with no husband present, 4.2% had a male householder with no wife present, and 37.0% were non-families. 31.6% of all households were made up of individuals and 16.9% had someone living alone who was 65 years of age or older. 2000 census[edit] The median income for a household in the city was $26,694, and the median income for a family was $34,345. Villisca Axe Murders[edit] Josiah B. References[edit]

Using Body Awareness For Deeper Meditation & We The Change, Personal Development for Conscious People | Exploring How Self-Improvement Plays a Role in Global Consciousness I would like to share with you a very powerful meditation technique I use called ‘body awarenes s’. Even though this practice is primarily used during meditation, I have found great use in utilizing body awareness in my every day life as well. For those of you who already have a meditation practice, I highly recommend trying the following steps. For those of you who do not currently meditate, the practice brings a great sense of peace, joy, perspective and fulfillment into your life. How To Meditate For Beginners20 Steps for Quieting The Mind Body awareness is extremely healthy and initiates the flow of fresh oxygenated blood to body areas that usually fall below the radar of your consciousness: Using the Body The big question for beginners is: where do I focus my attention during meditation? I have used the breath to some degree of success, but have always found deeper experiences through focusing on my body parts. First, it is always helpful to make your practice of meditation ‘formal’.

Spirit Vaults : Meditation - Essay It seems everyone is interested in meditation...talking about the wonderful benefits, recommending classes and discussing the different ways to "do it". But, for a beginner, just what is "it"? And how do you do "it"? Our busy, hectic, lifestyles may seem to prohibit this peaceful practice, or provide a convenient "excuse" not to begin, or continue, to meditate...but, the happy news is, you CAN successfully benefit even if you practice for short periods. With the simple technique described below, you will begin and incredible journey. Sit comfortably, preferably upright and alert. To sit on a mat, cushion or pillow, sit cross-legged, half or full lotus, depending on your ability. You may close your eyes (unless this causes you to fall asleep) or gaze with almost-closed eyes as if looking downward and inward. Traditionally, the best times to practice are upon arising and in the evening or before bedtime. Joi Eden is the co-founder, along with Betty Sun, of Stillness In Motion, Inc.

Do You Know What's Really In Your Tea? Tea is something I drink every single day. It’s sacred at my house – I even have a whole drawer devoted to it! I drink it because it is amazing for your health. The ancient Chinese tradition of drinking tea dates back thousand of years to the early Chinese dynasties and aristocrats who drank the beverage for its medicinal properties. Conventional Teas – An Abundance of Pesticides Did you know that most tea is not washed before it is put it into bags? A recent third-party analysis by Glaucus Research found that 91 percent of Celestial Seasonings tea tested had pesticide residues exceeding the U.S. limits. The “Wellness” tea line was found to contain traces of propargite, also a known carcinogen and developmental toxin. If grocery store brands don’t provide a clean option for you, perhaps a high-end loose leaf tea would circumvent some of the issues of grocery store brands. Teavana tea was tested by an independent lab and 100 percent of it was found to contain pesticides. 1.