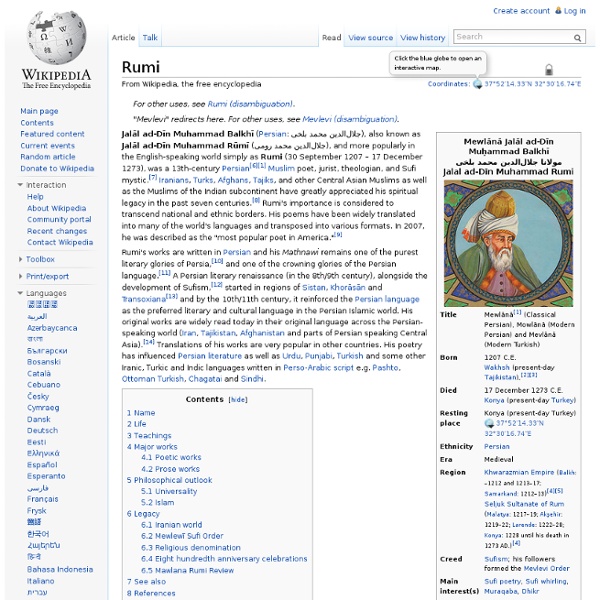 Jalāl ad-Dīn Muhammad Balkhī (Persian: جلال‌الدین محمد بلخى‎), also known as Jalāl ad-Dīn Muhammad Rūmī (Persian: جلال‌الدین محمد رومی‎), Mawlānā or Molānā (Persian: مولانا‎, meaning Our Master), Mawlawī or Molavi (Persian: مولوی‎, meaning My Master), and more popularly in the English-speaking world simply as Rumi (30 September 1207 – 17 December 1273), was a 13th-century Persian[1][6] poet, jurist, theologian, and Sufi mystic.[7] Iranians, Turks, Afghans, Tajiks, and other Central Asian Muslims as well as the Muslims of South Asia have greatly appreciated his spiritual legacy in the past seven centuries.[8] Rumi's importance is considered to transcend national and ethnic borders. His poems have been widely translated into many of the world's languages and transposed into various formats. In 2007, he was described as the "most popular poet in America."[9] Name Life Jalal ad-Din Rumi gathers Sufi mystics. Why should I seek? Hussam implored Rumi to write more. Teachings Major works

Revolutions of 1989 The Revolutions of 1989 were part of a revolutionary wave that resulted in the fall of communism in the communist states of Central and Eastern Europe. The period is sometimes called the Autumn of Nations,[citation needed] a play on the term "Spring of Nations", used to describe the Revolutions of 1848. The events began in Poland in 1989,[1][2] and continued in Hungary, East Germany, Bulgaria, Czechoslovakia, and Romania. One feature common to most of these developments was the extensive use of campaigns of civil resistance demonstrating popular opposition to the continuation of one-party rule and contributing to the pressure for change.[3] Romania was the only Eastern Bloc country whose people overthrew its Communist regime violently;[4] however, in Romania itself and in some other places, there was some violence inflicted by the regime upon the population. The Tiananmen Square protests of 1989 failed to stimulate major political changes in China. Background[edit]

Flapper A flapper onboard ship (1929) Flappers were a "new breed" of young Western women in the 1920s who wore short skirts, bobbed their hair, listened to jazz, and flaunted their disdain for what was then considered acceptable behavior. Flappers were seen as brash for wearing excessive makeup, drinking, treating sex in a casual manner, smoking, driving automobiles, and otherwise flouting social and sexual norms.[1] Flappers had their origins in the liberal period of the Roaring Twenties, the social, political turbulence and increased transatlantic cultural exchange that followed the end of World War I, as well as the export of American jazz culture to Europe. Etymology[edit] The slang word flapper, describing a young woman, is sometimes supposed to refer to a young bird flapping its wings while learning to fly.

Other Prayers Other Prayers As I Walk with Beauty (Apparently this is another verion of "Walk in Beauty") As I walk, as I walk The universe is walking with me In beauty it walks before me In beauty it walks behind me In beauty it walks below me In beauty it walks above me Beauty is on every side As I walk, I walk with Beauty. --Traditional Navajo Prayer Starting a Business: Ad... If you’re like thousands of other designers, programmers and other creative professionals out there, at one point in time you’ve considered starting your own business. Unlike most, you’ve gone against common sense and decided to open shop for yourself. And not just freelance full-time, mind you, but file for the company name, get some stationery, and wade through the legal mumbo-jumbo. Maybe even get a real office with a water cooler. This article offers real-world advice from the trenches of a small start-up, and is applicable to designers, web developers, copywriters, usability experts and all manner of service providers.

Jazz Age The Jazz Age was a feature of the 1920s (ending with The Great Depression) when jazz music and dance became popular. This occurred particularly in the United States, but also in Britain, France and elsewhere. Jazz played a significant part in wider cultural changes during the period, and its influence on pop culture continued long afterwards. Jazz music originated mainly in New Orleans, and is/was a fusion of African and European music.

Rukn-e-Alam Sheikh Rukn-ud-Din Abul Fath (1251–1335) commonly known by the title Rukn-e-Alam (pillar of the world) or called Shah Rukne Alam was among the eminent Sufi saints from Multan. Biography[edit] The Shaikh was the son of Pir Sadar-Al-Din Arif born at Multan on Friday, the 9th of Ramadan 649 Hijri (26 November 1251).[1] He was the grandson and successor of Shaikh Baha-Ud-Din Zakariya. Shaikh Rukn-e-Alam (Rukn-al-Din) died on Friday, the 7th of Jumada al-awwal 735 Hijri (3 January 1335). Entering a Trance State Entering a trance may seem difficult and even scary to some people the first time, but it's really the most natural thing in the world. Humans are hard wired for trance. Western culture is the only culture that rejects trance as a valid form of spiritual expression. This may be why so many people seek unhealthy ecstatic experiences and become addicted to drugs, alcohol, sex and pornography and thrill seeking. All of these fulfill similar needs as trance as all produce an ecstatic state, but they may have harmful affects on the body or on the person's life and relationships.