Where Brain Science and Marketing Meet 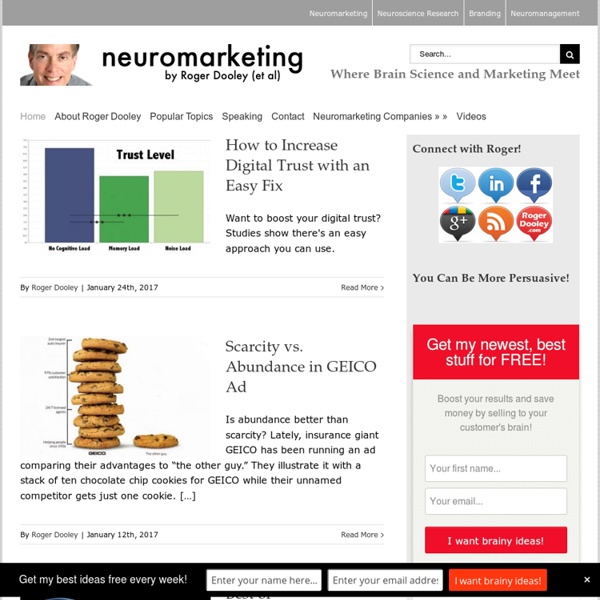 Neuromarketing Neuromarketing is a new field of marketing research that studies consumers' sensorimotor, cognitive, and affective response to marketing stimuli. Researchers use technologies such as functional magnetic resonance imaging (fMRI) to measure changes in activity in parts of the brain, electroencephalography (EEG) and Steady state topography (SST) to measure activity in specific regional spectra of the brain response, and/or sensors to measure changes in one's physiological state, also known as biometrics, including (heart rate and respiratory rate, galvanic skin response) to learn why consumers make the decisions they do, and what part of the brain is telling them to do it. Neuromarketing research raised interest for both academic and business side.

THE AMYGDALA AND THE EMOTIONS Chapter 9 — The Amygdala and the Emotions by Ben Best This installment is something of a digression in my "systematic" attempt to investigate the anatomical basis of mind. The one place to find the companies, technologies and ideas shaping the future of healthcare recent news Written on Oct 2, 2012 San Diego-based Freedom Meditech, Inc., a privately-held medical device company focused on commercialization of ophthalmic technologies for the detection of disease and management of patient health, last week announced it had secured a $2MM line of credit from Silicon...

Neuroscientists reveal magicians' secrets - Technology & science - Science - LiveScience NEW YORK — There is a place for magic in science. Five years ago, on a trip to Las Vegas, neuroscientists Stephen Macknik and Susana Martinez-Conde realized that a partnership was in order with a profession that has an older and more intuitive understanding of how the human brain works. Magicians, it seems, have an advantage over neuroscientists. MRC CBU, Cambridge » Jessica Grahn (compiled by Jessica Grahn) You can also use an interactive brain atlas. Orientation descriptions The AC / PC line

Scientists extract images directly from brain Researchers from Japan's ATR Computational Neuroscience Laboratories have developed new brain analysis technology that can reconstruct the images inside a person's mind and display them on a computer monitor, it was announced on December 11. According to the researchers, further development of the technology may soon make it possible to view other people's dreams while they sleep. The scientists were able to reconstruct various images viewed by a person by analyzing changes in their cerebral blood flow. Using a functional magnetic resonance imaging (fMRI) machine, the researchers first mapped the blood flow changes that occurred in the cerebral visual cortex as subjects viewed various images held in front of their eyes. Subjects were shown 400 random 10 x 10 pixel black-and-white images for a period of 12 seconds each.

Scientists Use Scans to Better Understand Brain Maturity As children mature, their brains bloom madly with activity — growing, pruning and rewiring. During this process, some connections strengthen, while others die off. The brain is reorganizing itself with experience. Researchers from the Washington University School of Medicine have created a “virtual machine” to study such brain development and to track young brains as they develop. Technology Review: Brain Coprocessors Ed Boyden, an Assistant Professor, Biological Engineering, and Brain and Cognitive Sciences at the MIT Media Lab, will give a presentation on using light to study and treat brain disorders at 3.30pm on Wednesday at EmTech 2010. Watch a live feed of the session here. The last few decades have seen a surge of invention of technologies that enable the observation or perturbation of information in the brain.

THE BRAIN FROM TOP TO BOTTOM For many years, scientists’ understanding of how the brain processes language was rather simple: they believed that Wernicke’s area interpreted the words that we hear or read, then relayed this information via a dense bundle of fibres to Broca’s area, which generated any words that we spoke in response. But subsequent experiments with brain imaging have revealed the existence of a third region of the brain that is also indispensable for language. This region is the inferior parietal lobule, also known as “Geschwind’s territory”, in honour of the American neurologist Norman Geschwind, who foresaw its importance as early as the 1960s. Brain imaging studies have now shown that the inferior parietal lobule (angular gyrus and supramarginal gyrus) is connected by large bundles of nerve fibres to both Broca’s area and Wernicke’s area. The inferior parietal lobule is one of the last structures of the human brain to have developed in the course of evolution.