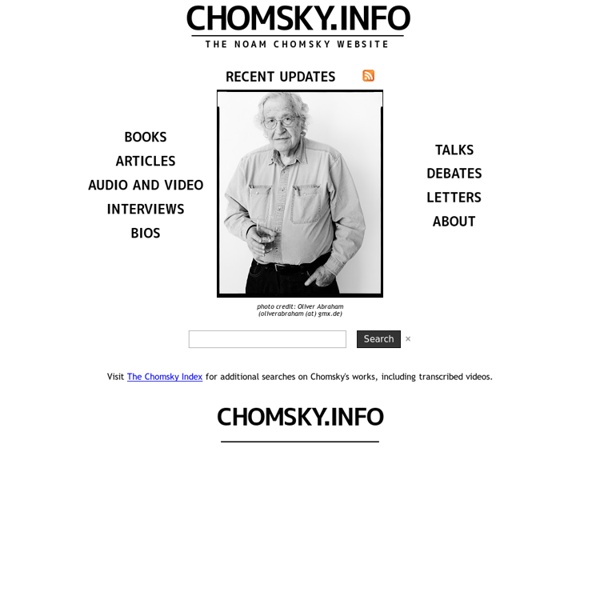 Eight O They Live! Eight O’Clock in the Morning by Ray Nelseon “Eight O’Clock in the Morning” is a short story written by Ray Nelson almost a half century ago. The well known movie “They Live” was based on that story and I just wanted to share it because even thought it’s supposed to be a work of science fiction, the story holds many analogies to our current situation.

The Official Paul Krugman Web Page News!! I am starting up my Princeton web site. It is at www.wws.princeton.edu/~pkrugman/ Off Grid Living The term “off grid“, or “off the grid” has multiple meanings, and many people have different opinions as to what off grid truly means. The reason for this is simple. Everyone lives their lives differently. I’d like to point out the obvious before we start clouding the issue with definitions, meanings, interpretations, and more debatable opinions. Before we attempt to define what “off grid” is, we should clarify what “the grid” is, then we can attempt to define what it means to get “off” of the grid. The Shock Doctrine In THE SHOCK DOCTRINE, Naomi Klein explodes the myth that the global free market triumphed democratically. Exposing the thinking, the money trail and the puppet strings behind the world-changing crises and wars of the last four decades, The Shock Doctrine is the gripping story of how America’s “free market” policies have come to dominate the world-- through the exploitation of disaster-shocked people and countries. At the most chaotic juncture in Iraq’s civil war, a new law is unveiled that would allow Shell and BP to claim the country’s vast oil reserves…. Immediately following September 11, the Bush Administration quietly out-sources the running of the “War on Terror” to Halliburton and Blackwater…. After a tsunami wipes out the coasts of Southeast Asia, the pristine beaches are auctioned off to tourist resorts.... New Orleans’s residents, scattered from Hurricane Katrina, discover that their public housing, hospitals and schools will never be reopened….

Cambridge English Teacher From 1 May 2017, Cambridge English Teacher is no longer available, but all the courses and content are now available to purchase without membership. Courses You can find the online teacher development courses on the Cambridge Learning Management System. Buy Courses as a teacher Buy Courses as an institution There are also additional courses to help you improve your teaching. There is also a range of teaching qualifications available from Cambridge English. They Live They Live is a 1988 American satirical science fiction horror film written and directed by John Carpenter. The film stars Roddy Piper, Keith David, and Meg Foster. It follows an unnamed drifter (referred to as "John Nada" in the film's credits) who discovers the ruling class are in fact aliens concealing their appearance and manipulating people to spend money, breed, and accept the status quo with subliminal messages in mass media. They Live is based on the 1963 short story, "Eight O'Clock in the Morning" by Ray Nelson. At release it was number one in the box office, but sales soon suffered, though the film was nominated for two Saturn Awards. They Live has since become a cult film.

Matt Taibbi on Politics and the Economy Thank You, Rolling Stone | BLOG ENTRY Today is my last day at Rolling Stone. As of this week, I’m leaving to work for First Look Media, the new organization that’s already home to reporters like Glenn Greenwald, Jeremy Scahill and Laura Poitras. I’ll have... February 20, 2014 10:35 AM ET Ex-Morgan Stanley Chief Jams Foot in Mouth, Complains of CEO Abuse | BLOG ENTRY There's a ton of interesting stuff going on in the Wall Street sphere of late – I'm trying to find some time to do a proper write-up of the extraordinary lawsuit just filed by the Better Markets... February 13, 2014 5:30 PM ET The Vampire Squid Strikes Again: The Mega Banks' Most Devious Scam Yet | ARTICLE Call it the loophole that destroyed the world. It's 1999, the tail end of the Clinton years.

Classroom Management Strategies for teachers and lecturers If you want to use praise to reach your most troubled and troublesome students you need to be aware of a few factors which can make it less effective as a classroom management strategy and as a way of connecting with students. In this teacher training video you’ll discover why the usual way of using… Continue Reading → Making Praise More Effective Part 1 – Mistakes Made When Using Praise Continue Reading →

Roddy Piper - Wikipedia Roderick George Toombs (April 17, 1954 – July 31, 2015),[6] better known by his ring name "Rowdy" Roddy Piper, was a Canadian professional wrestler and actor. In professional wrestling, Piper was best known to international audiences for his work with the World Wrestling Federation (WWF, later WWE) and World Championship Wrestling (WCW) between 1984 and 2000. Although he was Canadian, because of his Scottish heritage he was billed as coming from Glasgow and was known for his signature kilt and bagpipe entrance music.

Chris Hedges, Columnist Chris Hedges Chris Hedges, whose column is published weekly on Truthdig, has written 11 books, including the New York Times best seller “Days of Destruction, Days of Revolt” (2012), which he co-authored with the cartoonist Joe Sacco. Some of his other books include “Death of the Liberal Class” (2010), “Empire of Illusion: The End of Literacy and the Triumph of Spectacle” (2009), “I Don’t Believe in Atheists” (2008) and the best selling “American Fascists: The Christian Right and the War on America” (2008).