Artist Melts 1,527 Guns And Turns Them Into Shovels For Planting Trees. With project Palas por Pistolas, this artist seeks to show “how an agent of death can become an agent of life.” 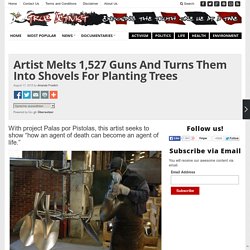 Credit: Pedro Reyes Gun control is a touchy subject – and for good reason. Existing solely to wound or kill, they are a dangerous weapon, one that if not employed for reasons of necessity, may harshly rip families apart. In Culiacán, Mexico, the city with the highest rate of gun deaths in the nation, many people know the devastating consequences these weapons can contribute to. That’s where creative activist Pedro Reyes comes in. Reyes is an inspired artist who likes to focus on the failures of modern culture in a positive light. With this unique perception, he transforms things people see as broken and models them in a new way. Concerning guns, he felt that something positive could be transformed from their matter, and, therefore, started a campaign asking residents to hand over their guns in exchange for a coupon they could use to buy electronics or household appliances.

Corporations. Democracy. Environment. Investigation. Israel. Peace. Radical Arts. Security. Shelter. A Passive Revolution - 28 Days. I woke today to read the headline: “Devolution: Now Greater Manchester gets control of its entire £6bn NHS budget” Manchester Evening News Immediately, my mind jumped to thinking about the idea of Passive Revolution – spaces, decisions and times in which the vested interests of the powerful, can no longer resist the desires of the people. 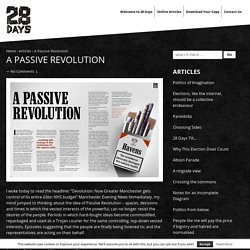 Periods in which hard-fought ideas become commodified, repackaged and used as a Trojan courier for the same controlling, top-down vested interests. Episodes suggesting that the people are finally being listened to; and the representatives are acting on their behalf. I know it all sounds so right. Devolution of public spending to regional control, away from the Parliament of Westminster. Decision making nearer to the ground, closer to the hearts, hands and voices of the people. I could blame music. What hope of this new wave of devolution hitting the shores of the fortressed square mile? For me this offers a far more honest home to discuss devolution. It's Not Like Challenging Oppression Has to Mean Making New Enemies. 2013 was something of a breakout year for the wider distribution of social-justice oriented cultural critique. 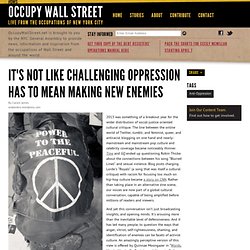 The line between the online world of Twitter, tumblr, and feminist, queer, and antiracist blogging on one hand and nearly-mainstream and mainstream pop culture and celebrity coverage became noticeably thinner. Time and GQ ended up questioning Robin Thicke about the connections between his song “Blurred Lines” and sexual violence. Blog posts charging Lorde’s “Royals” (a song that was itself a cultural critique) with racism for focusing too much on hip-hop culture became a story on CNN.

Rather than taking place in an alternative zine scene, our voices are now part of a global cultural conversation, capable of being amplified before millions of readers and viewers. And yet this conversation isn’t just broadcasting insights, and opening minds. The Limits of Non-Cooperation as a Strategy for Social Change. (Photo: A young girl is protesting peacefully in front of riot police during a demonstration in Athens, Greece, June 15, 2011 via Shutterstock) Civil disobedience is vital, but it is insufficient to transform society. 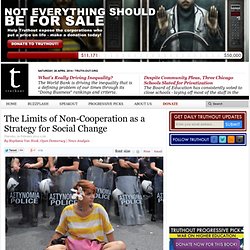 A new science of cooperation illuminates the path ahead. When the Croatian town of Vukovar was taken over by the Serbian Army in 1991 after 90 days of bombing, Alexander Jevtić, a Serb who had made the town his home, found himself in a seemingly impossible position. Once inside the town, Serbian forces set about rounding up Croatian men as young as 16 for transport to a secret detention facility, where many would be tortured and killed.

Jevtić was swept up in the expulsion. However, a guard recognized him and instructed him to look for any other Serbians who should be spared from execution. But non-cooperation clearly has its limits in terms of creating social change. The answer is to recognize and activate our sense of shared humanity as a continuous and conscious choice. "It Was Time to Do More Than Protest": Activists Admit to 1971 FBI Burglary That Exposed COINTELPRO. This is a rush transcript. 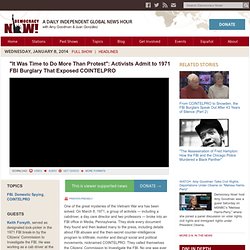 Copy may not be in its final form. NERMEEN SHAIKH: Today, we will spend the rest of the hour unraveling one of the great mysteries of the Vietnam War era. On March 8th, 1971, a group of eight activists, including a cab driver, a daycare director and two professors, broke into an FBI office in Media, Pennsylvania, and stole every document they found. The activists, calling themselves the Citizens’ Commission to Investigate the FBI, soon began leaking shocking details about FBI abuses to the media. Among the documents was one that bore the mysterious word "COINTELPRO. " AMY GOODMAN: No one involved in the break-in was ever caught. NARRATOR: It’s the greatest heist you’ve never heard of and one of the most important.

HARRY REASONER: Last March, someone broke into the FBI offices in Media, Pennsylvania, stole some records and mailed copies of them around to the several newspapers. NARRATOR: Those records would help bring an end to J. [break] BONNIE RAINES: Mm-hmm.