Media manipulation. Media manipulation is a series of related techniques in which partisans create an image or argument that favours their particular interests.[1] Such tactics may include the use of logical fallacies, psychological manipulations, outright deception, rhetorical and propaganda techniques, and often involve the suppression of information or points of view by crowding them out, by inducing other people or groups of people to stop listening to certain arguments, or by simply diverting attention elsewhere. 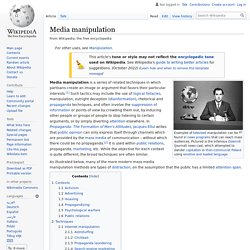 In Propaganda: The Formation of Men's Attitudes, Jacques Ellul writes that public opinion can only express itself through channels which are provided by the mass media of communication – without which there could be no propaganda.[2] It is used within public relations, propaganda, marketing, etc. While the objective for each context is quite different, the broad techniques are often similar. Contexts[edit] Activism[edit] Advertising[edit] Jake reid sur Twitter : "The 4 best films about media manipulation: Ace in the Hole, Network, Videodrome, They Live... 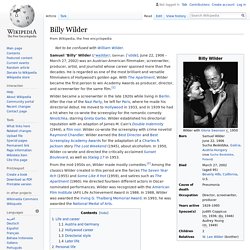 He is regarded as one of the most brilliant and versatile filmmakers of Hollywood's golden age. With The Apartment, Wilder became the first person to win Academy Awards as producer, director, and screenwriter for the same film.[1] From the mid-1950s on, Wilder made mostly comedies.[2] Among the classics Wilder created in this period are the farces The Seven Year Itch (1955) and Some Like It Hot (1959), and satires such as The Apartment (1960). He directed fourteen different actors in Oscar-nominated performances. Wilder was recognized with the American Film Institute (AFI) Life Achievement Award in 1986. Life and career[edit] Austria and Germany[edit] ‎‘Ace in the Hole’ review by Dan Hassler-Forest. 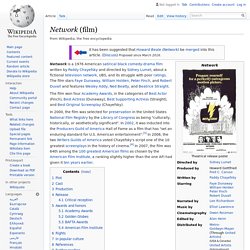 The film stars Faye Dunaway, William Holden, Peter Finch, and Robert Duvall and features Wesley Addy, Ned Beatty, and Beatrice Straight. Diana Christensen heads the network's programming department; seeking just one hit show, she cuts a deal with a band of radical terrorists (a parody of the Symbionese Liberation Army called the "Ecumenical Liberation Army"[citation needed]) for a new docudrama series called The Mao Tse-Tung Hour for the upcoming fall season. When Beale's ratings seem to have topped out, Christensen approaches Schumacher and offers to help him "develop" the news show. He says no to the professional offer, but not to the personal one, and the two begin an affair. Cast notes The film premiered in New York City on November 27, 1976, and went into wide release shortly afterward. 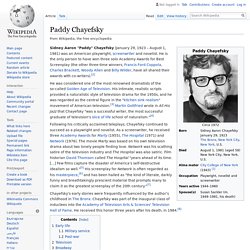 He is the only person to have won three solo Academy Awards for Best Screenplay (the other three-time winners, Francis Ford Coppola, Charles Brackett, Woody Allen and Billy Wilder, have all shared their awards with co-writers).[2] He was considered one of the most renowned dramatists of the so-called Golden Age of Television. His intimate, realistic scripts provided a naturalistic style of television drama for the 1950s, and he was regarded as the central figure in the "kitchen sink realism" movement of American television.[3] Martin Gottfried wrote in All His Jazz that Chayefsky "was a successful writer, the most successful graduate of television's slice of life school of naturalism. Network (1976) movie trailer. Network (1976) - Ned Beatty - "The World is a Business" 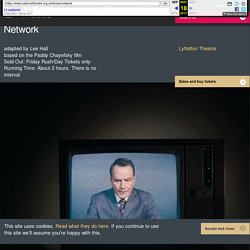 Howard Beale, news anchorman, isn’t pulling in the viewers. In his final broadcast he unravels live on screen. But when the ratings soar, the network seize on their newfound populist prophet, and Howard becomes the biggest thing on TV. Network depicts a dystopian media landscape where opinion trumps fact. Hilarious and horrifying by turns, the iconic film by Paddy Chayefsky won four Academy Awards in 1976. . £20 Friday Rush On Friday at 1pm, a limited number of £20 tickets are released online for the following week's performances. If you are coming to Foodwork, read more details here. Talks and events. Teaser Trailer. Send in a video and it could be projected as part of Network. Follow @BryanCranston's example, then tweet it using #ntMadAsHell. I know I'm late, but it doesn't really matter ;) besides you asked for it @NationalTheatre. #ntMadAsHell. RT and follow for the chance to win the programme and playtext for #ntNetwork. Closes Mon 20 Nov at 1pm. #breakaleg. 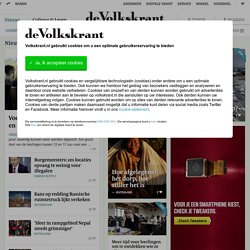 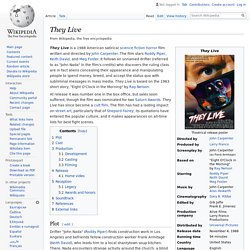 The film stars Roddy Piper, Keith David, and Meg Foster. It follows an unnamed drifter (referred to as "John Nada" in the film's credits) who discovers the ruling class are in fact aliens concealing their appearance and manipulating people to spend money, breed, and accept the status quo with subliminal messages in mass media. They Live is based on the 1963 short story, "Eight O'Clock in the Morning" by Ray Nelson. At release it was number one in the box office, but sales soon suffered, though the film was nominated for two Saturn Awards. 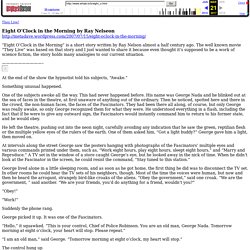 Eight O’Clock in the Morning by Ray Nelseon “Eight O’Clock in the Morning” is a short story written by Ray Nelson almost a half century ago. The well known movie “They Live” was based on that story and I just wanted to share it because even thought it’s supposed to be a work of science fiction, the story holds many analogies to our current situation. At the end of the show the hypnotist told his subjects, “Awake.” 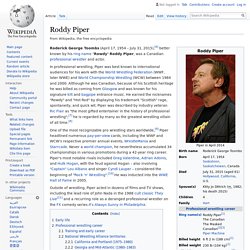 In professional wrestling, Piper was best known to international audiences for his work with the World Wrestling Federation (WWF, later WWE) and World Championship Wrestling (WCW) between 1984 and 2000. Although he was Canadian, because of his Scottish heritage he was billed as coming from Glasgow and was known for his signature kilt and bagpipe entrance music. He earned the nicknames "Rowdy" and "Hot Rod" by displaying his trademark "Scottish" rage, spontaneity, and quick wit. Piper was described by industry veteran Ric Flair as "the most gifted entertainer in the history of professional wrestling";[7] he is regarded by many as the greatest wrestling villain of all time.[8] Early life[edit] The entire WWE roster honors WWE Hall of Famer "Rowdy" Roddy Piper: Raw, Aug. 3, 2015. 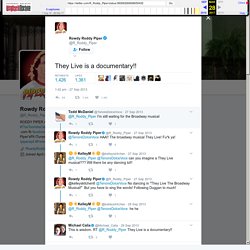 This timeline is where you’ll spend most of your time, getting instant updates about what matters to you. Tweets not doing it for you? Hover over the profile pic and click the Following button to unfollow any account you're not interested in anymore. Say a lot with a little When you see a Tweet you love, tap the heart — it lets the person who wrote it know that you appreciate them. Spread the word The fastest way to share someone else’s Tweet with your followers is with a Retweet. Join the conversation Add your thoughts about any Tweet with a Reply. Learn the latest Get instant insight into what people are talking about right now. Get more of what you love. Roddy Piper Admit They live is a documentary. They Live, the documentary! Based on a True Story ▶️️

The Mercury News's coverage of the Loma Prieta quake, to which Webb contributed, earned the paper a Pulitzer prize, the highest honour in American journalism. Smear campaign: Jeremy Renner as Gary Webb, in Kill The Messenger But the story that would make Webb’s name — and then contribute to his (many would say) unwarranted downfall, and then untimely death – began more than a decade earlier. In 1979 the Sandinista National Liberation Front (known colloquially as the Sandinistas) overthrew Nicaraguan dictator Anastasio Debayle. Fearing the creation of a Communist state allied with Cuba and the Soviet Union, the US government under President Ronald Reagan, began funding and arming groups of rebels opposed to the Sandinistas — known as the Counterrevolutionaries, or Contras. Read Tim Robey's review of Kill The Messenger. Kill the Messenger Movie Featurette - Gary Webb: Hero Journalist (2014) - Jeremy Renner Movie HD.