1130 Dakota Access Pipeline Remarks for Publication. Being Woman. M.dailykos. Read Meryl Streep’s introduction of Hillary Clinton during the recent 2012 Women in the World conference: Two years ago when Tina Brown and Diane von Furstenberg first envisioned this conference, they asked me to do a play, a reading, called – the name of the play was called Seven. 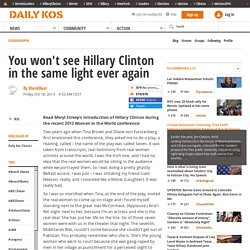 It was taken from transcripts, real testimony from real women activists around the world. I was the Irish one, and I had no idea that the real women would be sitting in the audience while we portrayed them. So I was doing a pretty ghastly Belfast accent. I was just – I was imitating my friend Liam Neeson, really, and I sounded like a fellow. 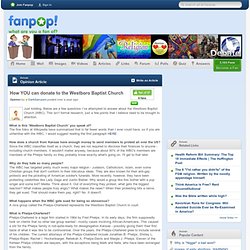 Below are a few questions I’ve attempted to answer about the Westboro Baptist Church (WBC). This isn’t formal research, just a few points that I believe need to be brought to attention. What is this ‘Westboro Baptist Church’ you speak of? The fine folks at Wikipedia have summarized that in far fewer words than I ever could have, so if you are unfamiliar with the WBC, I would suggest reading the first paragraph HERE. Karl Rove Loses Election After Being Checkmated By Cyber Sleuths? Crossposted from Occupy For Accountability Last month, we offered a million dollar reward for information leading to the arrest and conviction of anyone who rigged a federal election on November 6th. 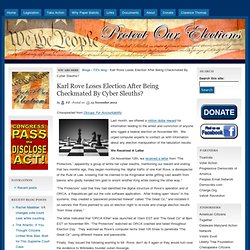 We urged computer experts to contact us with information about any election manipulation of the tabulation results. Where ideas and people meet. 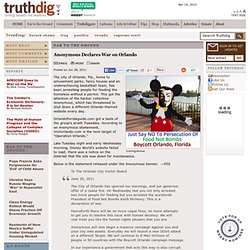 This got the attention of the hacker collective Anonymous, which has threatened to shut down a different Orlando-themed website every day. Orlandofloridaguide.com got a taste of the group’s wrath Tuesday. According to an Anonymous statement, Visitorlando.com is the next target of “Operation Orlando.” A letter from anonymous.

The Agenda Project: Patriotic Millionaires. Lulzsec and Anonymous Declare Open War Against All Governments and Fat Cats - Gizmodo. Internet activists crash White House phone lines calling for an end to the War on Drugs. On Friday June 17th, exactly 40 years after President Richard Nixon declared a “War on Drugs,” Internet activists organizing from the social news and activism website, Reddit.com, called the White House en masse to demand an end to the War on Drugs, calling it a “trillion dollar incarceration machine” with a measurable failure to reduce drug use, or harm from drug use. 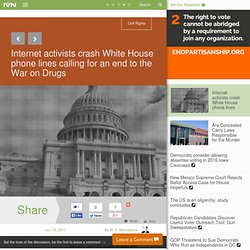 The original posting on Reddit came earlier this week and quickly rocketed to the website’s front page, receiving nearly 2000 votes from the social media website’s users. Referred to affectionately by its users as “the hive mind,” Reddit allows its community to vote on content in order to determine which news and stories– ranging from the offbeat and not safe for work, to this week’s serious political activism– are most important, featuring these on its front page.

Pandemonium! Dems Jam Republicans With Even More Conservative Budget. What was supposed to be a routine vote in the House — to knock down an amendment authored by conservative Republicans — turned into pandemonium on the House floor Friday, as Democrats tried to jam the plan through, and hang it around the GOP’s necks. 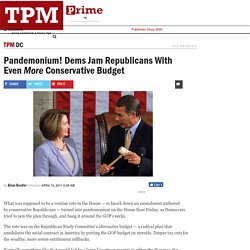 The vote was on the Republican Study Committee’s alternative budget — a radical plan that annihilates the social contract in America by putting the GOP budget on steroids. Deeper tax cuts for the wealthy, more severe entitlement rollbacks. Global war on drugs 'has failed' say former leaders. 2 June 2011Last updated at 09:30 Opiate use rose by 35% worldwide from 1998-2008, in spite of anti-drug efforts The global war on drugs has "failed" according to a new report by a group of politicians and former world leaders. The Global Commission on Drug Policy report calls for the legalisation of some drugs and an end to the criminalisation of drug users. The panel includes former UN Secretary General Kofi Annan, the former leaders of Mexico, Colombia and Brazil, and the entrepreneur Sir Richard Branson. Choice Voting Explained.

5th of November. Manifesto We, the People, hereby invoke our First Amendment Right; the right of the people...to petition the Government for a redress of grievances. 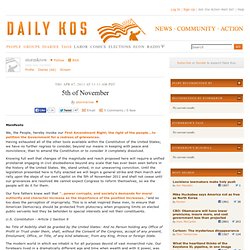 Having exhausted all of the other tools available within the Constitution of the United States; we have no further regress to consider, beyond our means in keeping with peace and nonviolence, than to amend the Constitution or to consider it completely dissolved. Knowing full well that changes of the magnitude and reach proposed here will require a unified proletariat engaging in civil disobedience beyond any scale that has ever been seen before in the history of the United States.

We, stand united, in our unwavering conviction. Until the legislation presented here is fully enacted we will begin a general strike and then march and rally upon the steps of our own Capitol on the 5th of November 2011 and shall not cease until our grievances are resolved.We cannot expect Congress to reform themselves, so we the people will do it for them. U.S. 1. This Is What Resistance Looks Like. More Fallout From Anonymous. More fallout from the Anonymous hacking of the shitshow fail parade that is HB Gary: ThinkProgress has learned that the U.S. 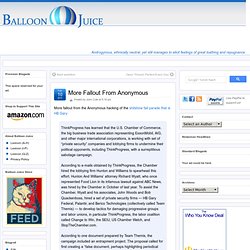 Chamber of Commerce, the big business trade association representing ExxonMobil, AIG, and other major international corporations, is working with set of “private security” companies and lobbying firms to undermine their political opponents, including ThinkProgress, with a surreptitious sabotage campaign.According to e-mails obtained by ThinkProgress, the Chamber hired the lobbying firm Hunton and Williams to spearhead this effort. Hunton And Williams’ attorney Richard Wyatt, who once represented Food Lion in its infamous lawsuit against ABC News, was hired by the Chamber in October of last year. The security firms hoped to obtain $200,000 for initial background research, then charge up to $2 million for a larger disinformation campaign against progressives.