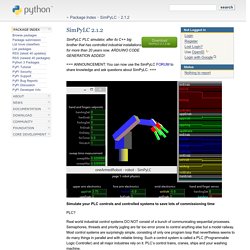 ARDUINO CODE GENERATION ADDED! === ANNOUNCEMENT: You can now use the SimPyLC FORUM to share knowledge and ask questions about SimPyLC. === Simulate your PLC controls and controlled systems to save lots of commissioning time Real world industrial control systems DO NOT consist of a bunch of communicating sequential processes. ActivUFRJ. Griatch's Evennia musings: Bringing back python memory.

Lately I've done work on the memory management of Evennia. 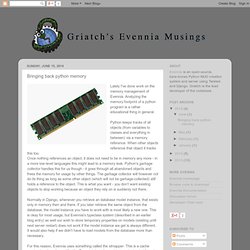 Analyzing the memory footprint of a python program is a rather educational thing in general. Python keeps tracks of all objects (from variables to classes and everything in between) via a memory reference. When other objects reference that object it tracks this too. Once nothing references an object, it does not need to be in memory any more - in a more low-level languages this might lead to a memory leak. Python's garbage collector handles this for us though - it goes through all abandoned objects and frees the memory for usage by other things.

Normally in Django, whenever you retrieve an database model instance, that exists only in memory then and there. For this reason, Evennia uses something called the idmapper. The tradeoff of speed and utility is memory usage. Make beautiful Python code (talk at PyCon IE ’13) Another year, another amazing PyCon. 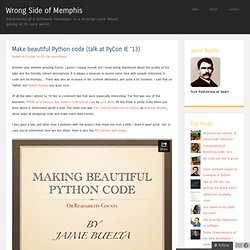 I guess I repeat myself, but I keep being impressed about the quality of the talks and the friendly, vibrant atmosphere. It is always a pleasure to spend some time with people interested in code and technology… There was also an increase in the number attendees, and quite a lot students. Building Skills in Object-Oriented Design — Building Skills in Object-Oriented Design. Step-by-Step Construction of A Complete Application Legal Notice This work is licensed under a Creative Commons License. 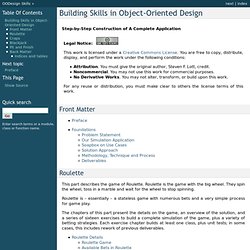 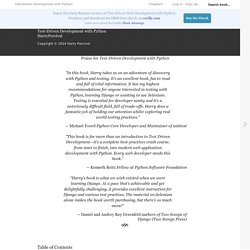 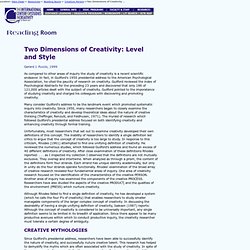 Puccio, 1999 As compared to other areas of inquiry the study of creativity is a recent scientific endeavor. In fact, in Guilford's 1950 presidental address to the American Psychological Asssociation, he cited the paucity of research on creativity. Guilford reviewed the index of Psychological Abstracts for the preceding 23 years and discovered that only 186 of 121,000 articles dealt with the subject of creativity. Guilford pointed to the imporatance of studying creativity and charged his colleagues with discovering and promoting creativity. Many consider Guilford's address to be the landmark event which promoted systematic inquiry into creativity. Unfortunately, most researchers that set out to examine creativity developed their own definitions of this concept. Since Guilford's presidental address, researchers have been able to successfully identify the nature of creativity, and successfully nuture creative talent. Cognitive styles are stable over time.

References Gregorc, A. Creativity Studies 101: An Introduction to the Field and Basic Concepts - puccio-creativity-101.pdf. Untitled Document - lakoff-ConTheorMetaphor.pdf. Metaphor design spaces. Is Design Dead? For many that come briefly into contact with Extreme Programming, it seems that XP calls for the death of software design. 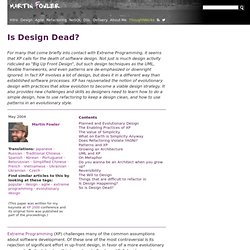 Not just is much design activity ridiculed as "Big Up Front Design", but such design techniques as the UML, flexible frameworks, and even patterns are de-emphasized or downright ignored. That Funky Metaphor Stuff. Commentary on The Art of Agile Development's Ubiquitous Language practice. 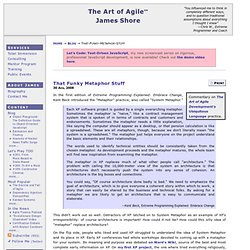 In the first edition of Extreme Programming Explained: Embrace Change, Kent Beck introduced the "Metaphor" practice, also called "System Metaphor. " My conversations with gullible machines...: Who moved my metaphor? Recently I posted a question on StackOverflow (Plug Plug) regarding 'what is a metaphor in Extreme Programming XP' ? 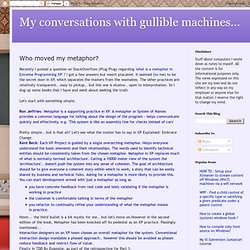 I got a few answers but wasn't placated. It seemed (to me) to be the secret door in XP, which separates the masters from the wannabes. The other practices are relatively transparent.. easy to pickup.. but this one is elusive.. open to interpretation. So I dug up some books that I have and went about seeking the truth. Untitled Document - lakoff-ConTheorMetaphor.pdf. Metaphors in Design Problem Solving: Implications for Creativity. Metaphors in Design Problem Solving:Implications for Creativity Hernan Pablo Casakin The College of Judea & Samaria, Ariel, Israel Metaphors help designers to understand unfamiliar design problems by juxtaposing them with known situations. 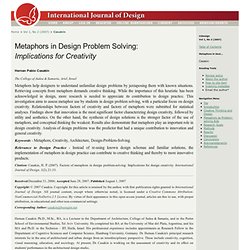 Retrieving concepts from metaphors demands creative thinking. Proven System Metaphors. Taken from EightSystemMetaphors Eight ArchitecturalPatterns were discussed in the book ShawOnSoftwareArchitecture. They can be seen as SystemMetaphors, although the distinction between a FrameWork and a SystemMetaphor would be useful to explore. Is a FrameWork is a design template, while a SystemMetaphor is a way of thinking about systems that is more generative?

Some of the SystemMetaphors in common use in interactive systems: I was thinking about archetypal domain-specific metaphors and I guess that's what this page is supposed to be about... now if we can just get someone to add the other three and describe them... What about the metaphor behind games like Doom, Quake, Half-life...? SystemMetaphors are very similar to the AttributeBasedArchitecturalStyles [1][2] project hosted by the SoftwareEngineeringInstitute at CarnegieMellonUniversity. Metaphor Design Spaces. The System Metaphor. What is the system metaphor and how do you use it? We'll explore the definition and purpose, and discuss a few metaphors used in some XP projects.