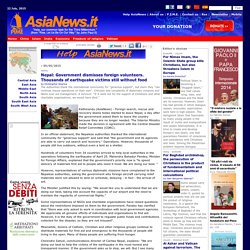 Thousands of earthquake victims still without foodby Christopher SharmaThe authorities thank the international community for "generous support", but claim they "can continue rescue operations on their own". Criticism and complaints of diplomatic missions and NGOs over aid management. A survivor: "If it were not for the support of Christians and other charitable organizations, we would have died. " Kathmandu (AsiaNews) - Foreign search, rescue and recovery teams today started to leave Nepal, a day after the government asked them to leave the country because they are no longer needed.

The Interior Ministry made the decision in agreement with the Central Disaster Relief Committee (CDRC). SERRV is happy. Concern, anguish as dowry-related abuse rises in Nepal ucanews.com. Sandra Bland: Video shows arrest of young black woman found dead in a police cell three days later - Americas - World - The Independent. Video has emerged showing the arrest of 28-year-old Sandra Bland, who was found dead in a cell in Waller County, Texas, on Monday morning. 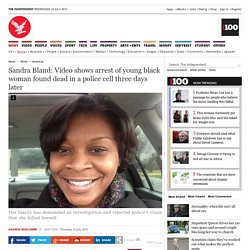 Authorities say it appeared she had taken her own life. But the young women’s friends and relatives say they do not believe the official version and they have seized on a video that shows the arrest of Ms Bland. A petition has been started to have an inquiry into the woman's death by the US Department Justice. Her friend Cheryl Nanton told The Independent that she feared foul play was involved. "I don't think she killed herself," she said. Ms Bland filled her Facebook page with videos in which she made observations about the issue of race in America under the title "Sandy Speaks". "Being a black person in America is very, very hard," she wrote in a recent post.

Remarkable airlift rescues 200 rhinos from poachers. By Juliet Eilperin and David Nakamura July 21 at 10:01 AM President Obama embarks on a trip to Africa this week that includes a controversial stop in Ethiopia, where the authoritarian government has come under sharp international criticism for its handling of political dissent. 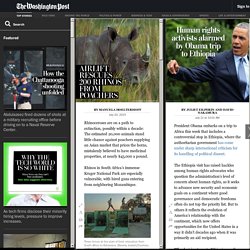 The Ethi­o­pia visit has raised hackles among human rights advocates who question the administration’s level of concern about human rights, as it seeks to advance new security and economic goals on a continent where good governance and democratic freedoms often do not top the priority list. But to others it reflects the evolution of America’s relationship with the continent, which now offers opportunities for the United States in a way it didn’t decades ago when it was primarily an aid recipient. Terrence McCoy sur Twitter : "Al Postell, homeless man who graduated Harvard with John Roberts, in the prime of his life, steering his beloved boat.

Wes Noon sur Twitter : "@CNNTonight @marclamonthill as a white male I treat officers with complete respect always"... Jillian Hurley sur Twitter : "#SandraBland As usual @TomAdelsbach gets to the HEART OF IT... Community groups call for removal of Waller County district attorney. WALLER COUNTY, Texas - Several community groups are calling for the removal or resignation of the Waller County district attorney. 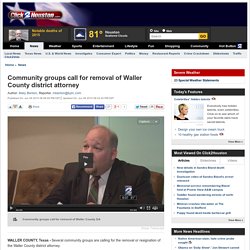 At a news conference Monday, Pastor Walter Pendleton accused Ethon Mathis, the District Attorney of Waller County, of sending him threatening text messages after Pendleton requested information about the prosecution rates of minorities versus white citizens. Pendleton has filed a grievance with the State Bar of Texas. "We hope justice is brought and to uncover the lifetime of terror that we've suffered in Waller County," Pendleton said while standing with his attorney and representatives from several groups supporting him. In a copy of the text messages released to the media, Pendleton asks Mathis to call him, but things quickly became heated. Mathis replies, "Don't ever call me again. District. Proposed Law to Reform Use of Chemical Dispersants on Oil Spills. As of right now, oil companies engaged in cleanup operations after a spill (one particular one comes to mind) are not required to disclose which chemicals comprise the products they are using to contain or break up the oil. 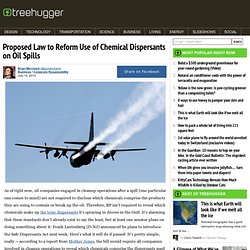 Therefore, BP isn't required to reveal which chemicals make up the toxic dispersants it's spraying in droves in the Gulf. It's alarming that these standards don't already exist to say the least, but at least one senator plans on doing something about it: Frank Lautenberg (D-NJ) announced he plans to introduce the Safe Dispersants Act next week. Here's what it will do if passed: It's pretty simple, really -- according to a report from Mother Jones, the bill would require all companies involved in cleanup operations to reveal which chemicals comprise the dispersants used therein.

Facts are not opinion. Seems pretty straightforward, but somebody ought to explain the difference to Texas Lt. 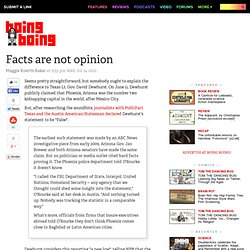