Chapter One - THE INSIDE STORY OF THE WOLF'S RETURN. Tracking collars on new Isle Royale wolves show there is 1 spot they won't go. Fact Check: Do Wolves Decimate Game That Hunters Want? An often heard complaint from those critical of wolves is that wolves decimate many kinds of game animals that humans hunt. 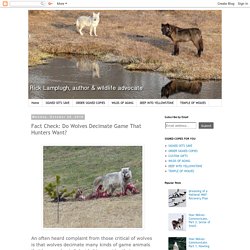 I decided to consider that complaint’s validity. To do so, I first looked at the diet and hunting habits of Yellowstone wolves, since they are probably the most studied wolves in the world. The Yellowstone Wolf Project inspects the remains of animals that park wolves kill. The Project sends teams by land or air to study specific wolf packs.

These technicians may see a kill occur, but most investigate the remains of kills. Eu.azcentral. Chernobyl's Radioactive 'Wildlife Preserve' Spawns Growing Wolf Population. Gray wolves from the radioactive forbidden zone around the nuclear disaster site of Chernobyl are now roaming out into the rest of the world, raising the possibility they'll spread mutant genes that they may carry far and wide, a new study finds. 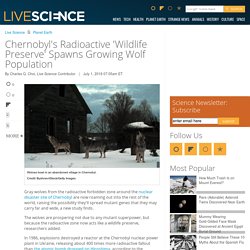 The wolves are prospering not due to any mutant superpower, but because the radioactive zone now acts like a wildlife preserve, researchers added. In 1986, explosions destroyed a reactor at the Chernobyl nuclear power plant in Ukraine, releasing about 400 times more radioactive fallout than the atomic bomb dropped on Hiroshima, according to the International Atomic Energy Agency.  Free Webinar - Ecology and Recovery of the Last Wild Red Wolves. Peter Guercio: Wolves would be good for ranching on the Front Range. By Peter Guercio Posted: 05/05/2018 10:54:33 PM MDT | Updated: a day ago Loki, a 2-year-old male, seen at W.O.L.F., a wolf sanctuary in northern Colorado, in 2012. 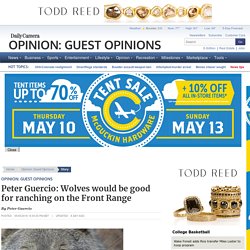 (Denver Post file photo) My family has been ranching and caring for the land in Boulder County for over 40 years. I care deeply about my home and am happy to share it with all the other native creatures here. Throughout the Front Range, I have noticed large areas of bare soil and established prairie dog colonies. Livestock and prairie dogs can coexist within diverse natural communities. I would argue that the best solution to regenerate grassland ecosystems would be to create a management system that synergistically works with livestock, carnivores and prairie dogs.

Peter Guercio: Wolves would be good for ranching on the Front Range. Isle Royale likely to get 20-30 wolves over a 3-year span. The wolf has become our scapegoat in the battle for the West. We tend to think of wilderness as the opposite of civilization. 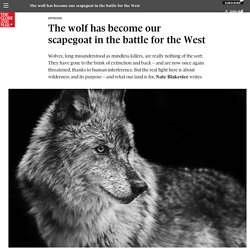 There is the natural world, in other words, and then there is the world we have made for ourselves. But in a place as thoroughly exploited as the American West – harvested first for fur, then timber, then gold, then fossil fuels – wilderness is something that has to be created, or recreated, by people. The problem is that not everyone agrees on what an ideal wilderness should look like, on what to leave in and what to leave out. The Lobo's Lament.

A Very Old Man for a Wolf. It’s the nature of the wolf to travel. 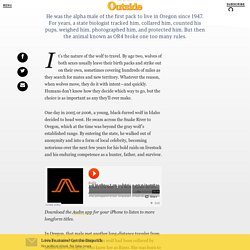 By age two, wolves of both sexes usually leave their birth packs and strike out on their own, sometimes covering hundreds of miles as they search for mates and new territory. Whatever the reason, when wolves move, they do it with intent—and quickly. Humans don’t know how they decide which way to go, but the choice is as important as any they’ll ever make. One day in 2005 or 2006, a young, black-furred wolf in Idaho decided to head west. The Island Wolves. Wallowa County: Dead wolves, cattle and the open range. Additionally, animal advocates say, eight wolves have been poached or died under suspicious circumstances since 2015. 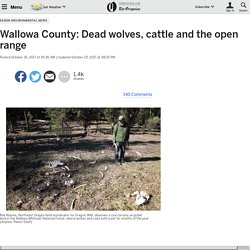 Some of those animals were connected to attacks on livestock. Harry Potter Can't Compete With the Magic of Wolves. A couple of summers ago, my wife and I promised our kids a special vacation. 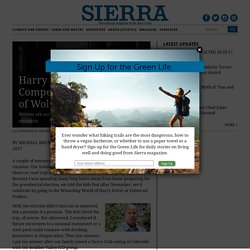 Our holidays usually involve visits with family at the Jersey Shore or road trips to places the Sierra Club is working to protect. Because I was spending many long hours away from home preparing for the presidential election, we told the kids that after November, we'd celebrate by going to the Wizarding World of Harry Potter at Universal Studios. Well, the election didn't turn out as expected, but a promise is a promise. The kids loved the trip, of course. But afterward, I wondered if future excursions to a national monument or a state park could compete with drinking butterbeer in Diagon Alley.

ICO (Inspiring Connections Outdoors) started as a volunteer-led Sierra Club program in 1971, based on a simple idea: Make nature and wilderness accessible to people—particularly young people—who otherwise have little chance to experience it. It wasn't always so. For the kids, the connection was instantaneous. 'American Wolf' Explores How People and Predators Should Coexist. 'Big, bad wolf' image flawed - scientists - BBC News. Image copyright Rooobert Bayer New research casts doubt on the idea that dogs are naturally more tolerant and friendly than wolves. 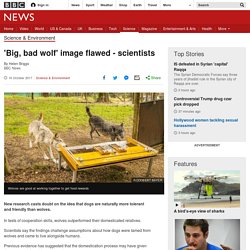 In tests of cooperation skills, wolves outperformed their domesticated relatives. Scientists say the findings challenge assumptions about how dogs were tamed from wolves and came to live alongside humans. Previous evidence has suggested that the domestication process may have given dogs a more tolerant temperament.

"We still have very much this idea of the big, bad wolf and the cuddly pooch on your sofa," Dr Sarah Marshall-Pescini, who led the research, told BBC News. Who's Really Defending Wildlife As Wolves Are "Removed"? Why We're So Divided Over Saving Wolves. Until recently, very few people had ever seen a wolf in the wild. 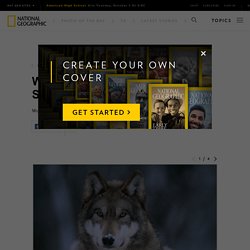 But thanks to the success of the recovery program in Yellowstone National Park, more and more people are getting the chance to appreciate this iconic animal. But for many ranchers, wolves—like coyotes—are regarded as varmint to be eradicated. For hunters and trappers, they are exciting quarry. In Wolf Nation: The Life, Death, and Return of Wild American Wolves, Brenda Peterson takes us inside the world of these top predators—and the cultural war being waged over them.

"The Profanity Peak Pack: Set Up & Sold Out," a film from Predator Defense. Our newest film is ruffling more than a few feathers. 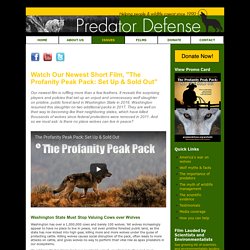 It reveals the surprising players and policies that set up an unjust and unnecessary wolf slaughter on pristine, public forest land in Washington State in 2016. Washington resumed this slaughter on two additional packs in 2017. They are well on their way to becoming like their neighboring states, which have killed thousands of wolves since federal protections were removed in 2011. Male #755: The Wolf With Nine Lives. He’s lost everything a wolf can lose, and still this resilient Yellowstone male thrives. By Carl Safina Guest contributor Wolf 755.

He had lost his brother, his mate, and his territory as a brutal winter was setting in. But he surprised everyone with his resilience…and luck. Photo: Alan Oliver. Who's Really Defending Wildlife As Wolves Are "Removed"? Top Predators Limit Their Own Numbers. Unlike small mammals who multiply like bunnies or some predators who’s boom or bust depends on said bunnies, large carnivores like lions and wolves keep their own numbers in check. According to a new work published in Oikos last week, population control is what distinguishes “apex predators” from the rest. The true cost of cattle: A Street Roots investigation. How Oregon’s 1.3 million cows are affecting the state’s economic and ecologic future Oregon’s bovine businesses are booming. Cattle, dairy and hay for livestock feed have topped Oregon’s list of highest grossing agricultural commodities for six years running, taking three of the top four slots each year. For two out of the past three years, live cattle for beef was Oregon’s No. 1 commodity in agriculture, the state’s second-largest industry.

This translates to a whopping 1.3 million cattle spread across the state among farms, ranches, feedlots and dairies, large and small. In Western Oregon, where the pasture is lush, it takes 2 acres to feed a single cow. Oregon is currently faced with uncertainty about its groundwater reserves and is falling far short of meeting its greenhouse gas reduction goals. Oregon cattle, but Midwest beef. Who's Really Defending Wildlife As Wolves Are "Removed"? Tamping down the war on wolves. Wolf Advisory Group has turned Washington State towards a progressive path that should be a model to other states for native carnivore management. Photo by Alamy Wolves are in the crosshairs of trophy hunters, commercial trappers, ranchers, state and federal lawmakers, and state and federal wildlife managers in established areas of their range throughout North America. We are a counter-weight to those threats, particularly in the United States, and last week, The HSUS won a signature battle for wolves.

The U.S. Court of Appeals for the District of Columbia affirmed a lower court ruling and continued to block federal delisting of wolves in the northern Great Lakes region, chiding the USFWS for taking a piecemeal approach to wolf recovery and “call[ing] it quits” too early. That’s why it’s so important to see a state fish and wildlife agency chart a different, more cooperative, less harmful course in the management of human relations with wolves.

Wool Incentive Program Ran Its Course. As the second half of 2017 rolls in, with no sign of the political climate calming, ag industry policy makers continue to wage their own type of storm in D.C. to make sure producers are represented, and that includes the 88,000 producers in the U.S. sheep industry. From on the farm and ranch to the retail level, the sheep industry has a total retail impact of $2.7 billion and supports nearly 98,000 sheep-industry related jobs, according to the American Sheep Industry (ASI). The new administration brought with it some hope that a program similar to the wool incentive program might make a comeback, according to Larry Prager, Center of the Nation Wool, from Belle Fourche, SD. The Wool Act, which was run at no expense to tax payers, was funded by foreign imports, according to ASI.

All funds, to the tune of more than $200 million a year, were collected through tariffs on imported wool and wool textile products. "The Profanity Peak Pack: Set Up & Sold Out," a film from Predator Defense. From the Left Bank: Don’t cry wolf in Eastern Washington - The Independent. Male #755: The Wolf With Nine Lives. Interior wolf control program to end. The state plans to suspend its largest wolf control program. The Upper Yukon Tanana area program, which has targeted wolves in an area of the eastern interior since 2004, is scheduled to cease after the 2017-2018 season. Listen now. How to Be an Activist. What Happens to Wolves When They're Raised Like Dogs? Dogs and wolves have an innate sense of inequity. Why We're So Divided Over Saving Wolves. Rogue Washington Rancher Wiped Out 15% of State’s Wolves in Violation of Federal Rules. Heavily hunted wolves more stressed, study says. Some wolves are on their way to domestication—again. A peaceful end to the wolf wars?

Academic.oup. Adaptive use of nonlethal strategies for minimizing wolf–sheep conflict in Idaho. An Open Letter To President Donald Trump. 'Devastating': Historic drop in cattle prices leaves ranchers desperate for answers. MTU professor joins scientists opposing hunt. How to Be an "Alpha Male," According to Wolves.

Algonquin Wolf. Of Ranchers, Beef, Bison and Predators: Searching For A Better, Still-Wild West - The Bullseye. Ecologist Scott Creel to be first speaker in this year’s Provost’s Distinguished Lecturer Series at MSU. One man's 1,000-mile mission to save a Washington wolf pack. The Profanity Peak Pack: Lost of wolves and academic freedom. Our Wild World. Dying to Save You - Correction.

Study Casts Doubt on Theory That Legal Hunting Reduces Poaching. Defenders of Wildlife = Defenders of Livestock? Why Do They Support Killing Wolves in Washington? More wolves killed because of the sacred cow at the public trough. Wolf advocates angry that state preparing to kill entire pack. Profanity Peak wolf pack in state’s gun sights after rancher turns out cattle on den.