Al-Hewar Online. Al Jazeera. Al Jazeera English. It is a sister channel of both the US-based English-language channel Al Jazeera America (AJAM), and of the original, Arabic-language, Al Jazeera - sometimes, albeit incorrectly, referred to as: Al Jazeera Arabic. 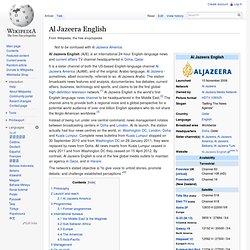 The station broadcasts news features and analysis, documentaries, live debates, current affairs, business, technology and sports, and claims to be the first global high-definition television network.[1] Al Jazeera English is the world's first English-language news channel to be headquartered in the Middle East.[2] The channel aims to provide both a regional voice and a global perspective for a potential world audience of over one billion English speakers who do not share the Anglo-American worldview.[3] Instead of being run under one central command, news management rotates between broadcasting centers in Doha and London.

Palestine. Satellite image of the region of Palestine, 2003. 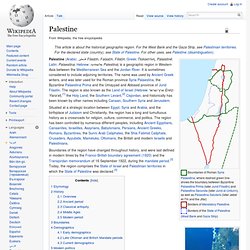 Palestine (Arabic: فلسطين‎ Filasṭīn, Falasṭīn, Filisṭīn; Greek: Παλαιστίνη, Palaistinē; Latin: Palaestina; Hebrew: פלשתינה Palestina) is a geographic region in Western Asia between the Mediterranean Sea and the Jordan River. It is sometimes considered to include adjoining territories. Al-Hewar Online. Judaism, Torah and Jewish Info - Chabad Lubavitch. The Jewish Website - aish.com. Voices from the Conflict. History of Zionism. Zionism as an organized movement is generally considered to have been fathered by Theodor Herzl in 1897; however the history of Zionism began earlier and related to Judaism and Jewish history. 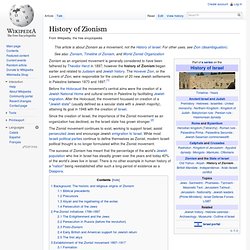 State of Palestine. The State of Palestine[i] (Arabic: دولة فلسطين‎ Dawlat Filasṭīn), is a sovereign state in the Levant that is recognized by the United Nations.[13][14] Its independence was declared on 15 November 1988 by the Palestine Liberation Organization (PLO) and its government-in-exile in Algiers. It claims sovereignty over the Palestinian territories,[15] and has designated Jerusalem as its capital. [ii][3][4] Most of the areas claimed for the State of Palestine have been occupied by Israel since 1967 in the aftermath of the Six-Day War, with the Palestinian Authority exercising socio-political administration since 1993 in limited areas.[7] In 2012, it was granted observer status by the United Nations (UN).[16] The October 1974 Arab League summit designated the PLO as the "sole legitimate representative of the Palestinian people" and reaffirmed "their right to establish an independent state of urgency. 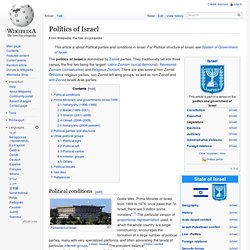 They traditionally fall into three camps, the first two being the largest: Labor Zionism (social democrat), Revisionist Zionism (conservative) and Religious Zionism. There are also several non-Zionist Orthodox religious parties, non-Zionist left-wing groups, as well as non-Zionist and anti-Zionist Israeli Arab parties. Political conditions[edit] Golda Meir, Prime Minister of Israel from 1969 to 1974, once joked that "in Israel, there are 3 million prime ministers".[1] The particular version of proportional representation used, in which the whole country is a single constituency, encourages the formation of a large number of political parties, many with very specialized platforms, and often advocating the tenets of particular interest-groups.

[citation needed] The prevalent balance[citation needed] between the largest parties means that the smaller parties can have strong influence disproportionate to their size. Political right[edit] Governance of the Gaza Strip. The governance of Gaza Strip has been carried out by the Hamas administration, led by Ismail Haniyeh, since 2007. The Hamas administration is often referred to as the Hamas government in Gaza.[1][2][3] Since the division between the two parties, there have been conflicts between Hamas and similar factions operating in Gaza, and with Israel, most notably the Gaza War of 2008-2009.

The radicalization of the Gaza Strip brought internal conflicts between various groups, in events like 2009 Hamas crackdown on Jund Ansar Allah, an al-Qaeda affiliated group, resulting in 22 people killed; and the April 2011 Hamas crackdown on Jahafil Al-Tawhid Wal-Jihad fi Filastin, a Salafist group involved in Vittorio Arrigoni's murder.[7][8] Negotiations toward reconciliation between Fatah and Hamas, which were mediated by Egypt, produced a preliminary agreement in 2011, which was supposed to be implemented by May 2012 through joint elections.

Palestinian National Authority. The Palestinian Authority was formed in 1994, pursuant to the Oslo Accords between the Palestine Liberation Organization (PLO) and the government of Israel, as a five-year interim body. 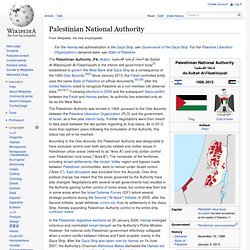 Further negotiations were then meant to take place between the two parties regarding its final status. Palestinian territories. Israel. Israeli-Palestinian ProCon.org.