Republicans leaders should take their own advice, listen to climate scientists. Republican presidential candidate Rick Santorum recently said we should “leave science to the scientists.” 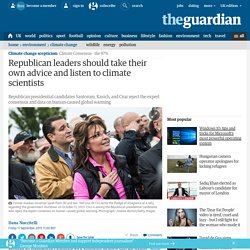 That’s good advice; especially since Republican Party leaders’ response when asked about climate change is inevitably “I’m not a scientist.” When it comes to questions of science, listening to scientific experts is always a good idea. The problem is that in this case, Republican leaders are failing to follow their own advice. I believe in an authority greater than David Cameron’s. Am I an extremist? The Church of England is the longest-running prevent strategy in history. 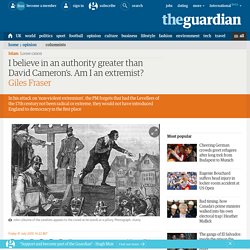 If not from its inception, then certainly from the end of the English civil war, the big idea of the C of E was to prevent radicalisation – precisely the sort of radicalisation that led to religious people butchering each other throughout the 1630s and 40s. Its strategy was to discourage two things: big expansive politically minded theology – the sort of theology that has ambitions to change the world – and religious passion (or “enthusiasm” as it was dismissively described). From the end of the 17th century, a new mood of religious inclusivity would dominate.

Increasingly suspicious of theological dispute, the idea was to kill off God – or at least God-talk – with religion. People would all pray together, using the same form of words (the aptly described Book of Common Prayer), but be discouraged from discussing the ideological side of religion. Emma Thompson joins protest at Shell’s London HQ – video. 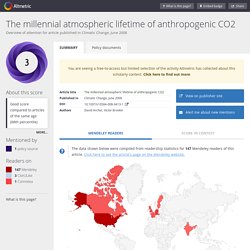 So far Altmetric has tracked 1,395 articles from this source. Older articles will score higher simply because they've had more time to accumulate mentions. We're also able to compare this article to 72 articles from the same source and published within six weeks on either side of this one. Bushfires, heatwaves and early deaths: the climate is changing before our eyes. When I wrote The Weather Makers, I laid out the state of climate science as it was understood in 2005. 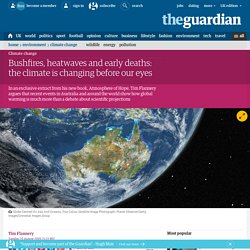 The book received much acclaim, but it was also criticised by climate-change sceptics as extremist and alarmist. 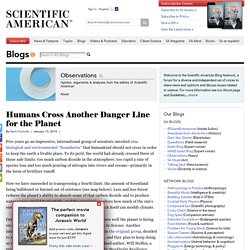 Rapid Arctic ice loss linked to extreme weather changes in Europe and US. The string of massive snowstorms and bone-chilling cold on the US east coast, as well as flooding in Britain and record temperatures in Europe, are linked to rapid ice loss in the Arctic, new research appears to confirm. 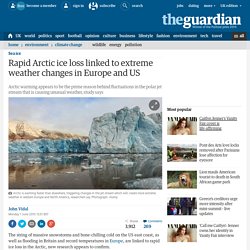 While the rapidly-thawing Arctic cannot be held responsible for specific weather events like the “snowmageddon” in 2009, Hurricane Sandy, or European heatwaves, researchers at Rutgers university said it appears to be a prime reason why the polar jet stream – a ribbon of winds that encircles the globe – gets ‘stuck’ with increasing frequency. Western Europe and large parts of North America will experience more extreme weather because of “Arctic amplification” - the enhanced sensitivity of high latitudes to global warming, the team suggested in a paper published in the journal Philosophical Transactions of the Royal Society A. “We are seeing these extremes because the Arctic is warming faster than elsewhere. But the impacts could be substantial, they warn.

Ited Nations and Climate Change. NOAA Climate.gov sur Twitter : "NEW case studies & tools related to #climate and #health added to the #USClimateToolkit today: Business Insider sur Twitter : "In 2050, more than half the world's population will lack adequate access to water. Climate change: at last a breakthrough to our catastrophic political impasse? Today a group of eminent jurists accuse governments and enterprises of being in clear and flagrant breach of their legal obligations on climate change – under human rights law, international law, environmental law, and tort law. 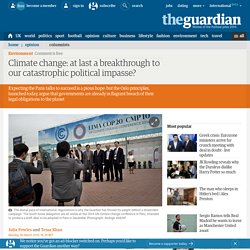 Human ravaging of our planet and climate through relentless fossil fuel extraction and greenhouse gas emissions is undoubtedly the defining existential challenge of our time. Our collective failure to commit to meaningful reductions in emissions is a political and moral travesty, with catastrophic implications, particularly for the poorest and most marginalised, domestically and globally. The Extinction Crisis.

It’s frightening but true: Our planet is now in the midst of its sixth mass extinction of plants and animals — the sixth wave of extinctions in the past half-billion years. 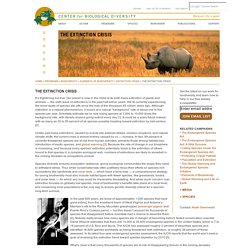 We’re currently experiencing the worst spate of species die-offs since the loss of the dinosaurs 65 million years ago. Although extinction is a natural phenomenon, it occurs at a natural “background” rate of about one to five species per year. Scientists estimate we’re now losing species at 1,000 to 10,000 times the background rate, with literally dozens going extinct every day [1]. It could be a scary future indeed, with as many as 30 to 50 percent of all species possibly heading toward extinction by mid-century [2].