Fagburn. The pursuit of justice.

Philosophy. Who Is Running for President (and Who’s Not)? Oil Above Water: Economic Interdependence and Third Party Intervention. Towards an Open Commons Society: The Transition Plan for Equador. Thunderclap. Neoconservative gallery -- the danger is real. Lobbying Spending Database-Google Inc, 2014. Pope Francis Calls For 'Legitimate Redistribution' Of Wealth To The Poor. VATICAN CITY (AP) - Pope Francis called Friday for governments to redistribute wealth to the poor in a new spirit of generosity to help curb the "economy of exclusion" that is taking hold today. 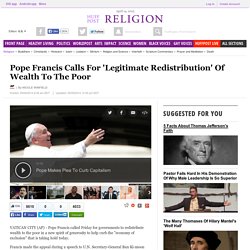 Francis made the appeal during a speech to U.N. Secretary-General Ban Ki-moon and the heads of major U.N. agencies who are meeting in Rome this week. Latin America's first pope has frequently lashed out at the injustices of capitalism and the global economic system that excludes so much of humanity. If.then.fund - Reshaping Congress by empowering small dollar donors to make contributions based on what politicians do, not what they promise. "We Need To Decriminalize Our Marijuana Laws" (Video above from "The Washington Guardian") Now that two states have legalized pot, president's position raises questions about enforcing the current law By John Solomon Now that two states have legalized recreational use of marijuana, the Obama administration insists it supports the current federal law declaring pot illegal. 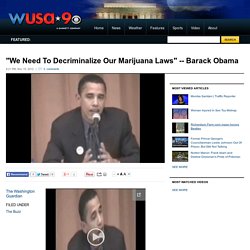 But it wasn't that long ago when President Barack Obama supported eliminating criminal penalties for marijuana use. Video footage from a 2004 Illinois Senate debate in front of college students shows Obama advocating decriminalizing marijuana. 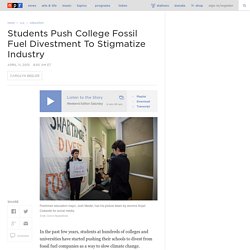 Women can build a better America. Warren on softening Wall Street tone: 'Give me a break' Sen. 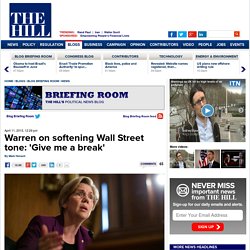 Elizabeth Warren (D-Mass.) on Friday laughed off suggestions that using gentler rhetoric would improve her relationship with big banks. “Do you think that if I used a sweeter tone with the banks, that if I said very nicely, ‘We should have broken you into pieces,’ that everything would be fine?” She asked audience members at the Know Your Value Conference in Philadelphia. “Do you think that if I smiled more at banking committee hearings, that Wall Street would put me on their Christmas card lists?”

She continued. The Huffington Post reported that Warren revealed she was “still angry” about the 2008 financial collapse and government’s resulting bailout of the corporations involved. Watch: Juanita Nelson (1923-2015) on War Tax Resistance, Civil Rights & Simple Living. Juanita Nelson, a longtime civil rights activist, war tax resister and farmer, has died at the age of 91 in Greenfield, Massachusetts. 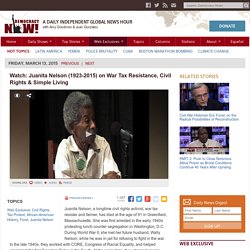 She was first arrested in the early 1940s protesting lunch counter segregation in Washington, D.C. During World War II, she met her future husband, Wally Nelson, while he was in jail for refusing to fight in the war. In the late 1940s, they worked with CORE, Congress of Racial Equality, and helped organized the first Freedom Rides in the South. National War Tax Resistance Coordinating Committee. Insiders: Rubio has upside in early states - James Hohmann. As he prepares to launch his presidential campaign on Monday, Marco Rubio is seen as significantly more electable by early state insiders of both parties than Ted Cruz and Rand Paul, his GOP Senate colleagues who are already in the race. 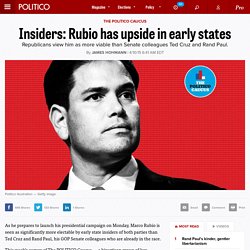 This week’s survey of The POLITICO Caucus — a bipartisan group of key activists, operatives and thought leaders in New Hampshire and Iowa — finds that three in four Republicans think the Florida senator could defeat Hillary Clinton in a general election. For context, only 6 percent thought Cruz could carry their state against the former secretary of state in a general, and only one-quarter thought Paul could. Story Continued Below. Reddit CEO Ellen Pao bans salary negotiations. Photo by REUTERS/Stephen Lam Ellen Pao may have lost a Silicon Valley gender discrimination suit on all four accounts, but she isn’t backing down on a mission to increase gender equality in the tech world. 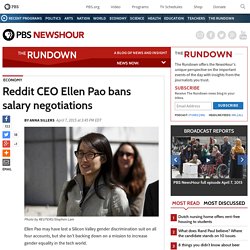 Silicon Valley workers thank Ellen Pao with full-page newspaper ad. In the wake of Ellen Pao's losing verdict in her high-stakes gender bias trial, a group of tech workers pooled together money to place a full-page ad in a Palo Alto newspaper with a simple message: "Thanks Ellen.

" The ad, which appeared in Tuesday's edition of the Palo Alto Daily Post, features a minimalist design with a stark black page and the two words in small white font in the center, as USA Today first reported. Pao's gender bias claims against Kleiner Perkins Caufield & Byers were struck down in San Francisco Superior Court last Friday after a five-week trial that gripped Silicon Valley. Despite her loss, Pao seemed to take consolation in the fact that her story was broadcast to thousands around the world thanks to the intense media interest in the trial. Supreme Court Will Take Up Gay Marriage. WASHINGTON -- The U.S. 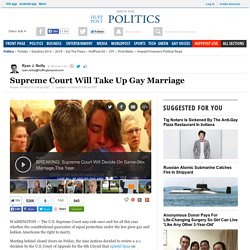 Supreme Court may rule once and for all this year whether the constitutional guarantee of equal protection under the law gives gay and lesbian Americans the right to marry. Meeting behind closed doors on Friday, the nine justices decided to review a 2-1 decision by the U.S. Court of Appeals for the 6th Circuit that upheld bans on same-sex marriage in Ohio, Michigan, Kentucky and Tennessee. The decision by two judges on the Cincinnati-based court, both appointed by President George W. Bush, marked the first time a federal appeals court backed a same-sex marriage ban after other appellate courts had found similar bans unconstitutional. The Supreme Court will hear arguments and probably rule by June. Gay Conversion Therapists Claim Most Patients Fully Straight By The Time They Commit Suicide.

MINFORD, OH—Boasting that they have cured hundreds of teens and young adults over the years, gay conversion therapists from the Redeeming Path Treatment Center told reporters Thursday that most of their patients are completely straight by the time they commit suicide. 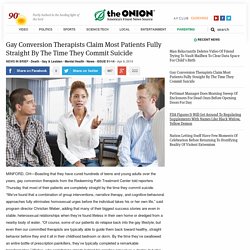 The Pros And Cons Of Body Cameras For Police. Following several high-profile civilian deaths at the hands of police officers, many Americans have called for the mandatory use of body cameras by law enforcement as a means of curbing the excessive use of force and providing clear accounts of officers’ actions. Here are some of the pros and cons of body cameras for police officers: Provides accurate record of where police were when they turned off their body cameraHelps to reinstate trust between Americans and surveillanceUnlimited footage of police officers breathing heavily during a foot chaseTurning camera askew allows officers to record beatings with stylish Dutch anglesMore things to watchFinally gives Americans glimpse at what it’s like to turn on that siren and gun it straight through a red light.

Sci-Fi’s Right-Wing Backlash: How a Small Group of Deranged Trolls Can Ruin Any Event. Obama's Executive Orders: Presidential Overreach? Carolyn Kaster/Associated PressPresident Barack Obama speaks at the Holocaust Memorial Museum, Monday, April 23, 2012, in Washington. President George W. Bush used his executive power to bypass Congress, almost as a matter of routine. Now President Barack Obama is pulling a similar stunt. Christianity was de facto state religion in 19th century. United States Still a No-Vacation Nation. For Immediate Release: May 24, 2013Contact: Alan Barber, (202) 293-5380 x115 Washington, D.C.- The United States is the only advanced economy that does not guarantee its workers any paid vacation time, according to a new review of international labor laws by the Center for Economic and Policy Research (CEPR).

Cannabis. Reflections of a struggled holiday. Reporter Suspended For Defending Evolution Comes Back, Gives Immediate Middle Finger To ESPN. Revolving Door Of Teachers Costs Schools Billions Every Year : NPR Ed. Nearly half of all beginning teachers will leave their classrooms within five years, only to be replaced by another fresh-faced educator. LA Johnson/NPR hide caption itoggle caption LA Johnson/NPR.