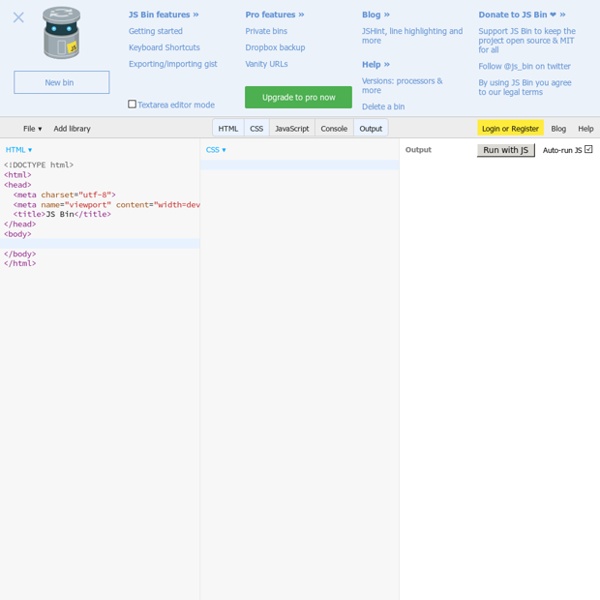 The first MEAN Stack meetup - MEAN Stack (London, England March 12 · 6:00 PM This location is shown only to members It is our pleasure to announce the first MEAN Stack meetup ever to be held in London. As this is our first event we are putting a cap on the number of attendees - please make sure you RSVP as soon as possible to book your place. learn.knockoutjs.com In this first tutorial you'll experience some of the basics of building a web UI with the Model-View-ViewModel (MVVM) pattern using knockout.js. You'll learn how to define a UI's appearance using views and declarative bindings, its data and behavior using viewmodels and observables, and how everything stays in sync automatically thanks to Knockout's dependency tracking (even with arbitrary cascading chains of data). Using bindings in the view

XUI Introduction - Waterfox XUI Zone A brief overview of XUI What is XUI? XUI is a Java and XML framework with which you can build The OpenAjax hub The OpenAjax Hub is a set of standard JavaScript functionality defined by the OpenAjax Alliance that addresses key interoperability issues that arise when multiple Ajax libraries are used within the same web page. A very important part of this specification is the Publish/Subscribe Event Management that founds a framework for building event driven web applications. These services by providing a common and interoperable service for publishing events on a broadcast basis and for script logic to listen (i.e., subscribe) to events fired by other script logic. An implementation of the OpenAjax hub specification

Introduction to the MEAN Stack, Part One: Setting Up Your Tools I’ve received several emails asking for instructions on how to set up a basic MEAN stack app. I’m going to take it one step further and give you guys a two-part post that will walk you through creating your first MEAN stack app- from installing the tools to actually writing the code. In Part One we’ll go through the setup and installation process. Next in Part Two we’ll walk through the steps for building a very simple to-do list. 5 Ways to Make Ajax Calls with jQuery There are at least five ways to make AJAX calls with the jQuery library. For beginners, however, the differences between each can be a bit confusing. In this tutorial, we'll line them up and make a comparison. Additionally. we'll review how to inspect these AJAX calls with Firebug as well. This section is for those who have no idea what AJAX is.

How To Embed Images Directly Into Your HTML When you code a web page, you’ll oftentimes want to include images. In almost every case you’ll throw down a line of code that looks something like this: But did you know that you can embed your image directly into the HTML without having to link to an external file? Test-Driven Development with JavaScript To shorten the development cycle of your Web application you need to start testing it on the early stages of the project. It seems obvious, but many enterprise IT organizations haven’t adopted agile testing methodologies, which costs them dearly. JavaScript is dynamically typed interpreted language - there is no compiler to help in identifying errors as it’s done in compiled languages like Java. This means that a lot more time should be allocated for testing for JavaScript Web applications.

Build a real-time polls application with Node.js, Express, AngularJS, and MongoDB Recently while lecturing on HTML5 to a large group of students, I wanted to poll them and display their voting results, updating in real-time. I decided to quickly build a polling app for this purpose. I wanted a simple architecture and not too many different languages and frameworks. So I decided to use JavaScript for everything — Node.js and Express for the server-side, MongoDB for the database, and AngularJS for the front-end user interface. “This MEAN stack (Mongo, Express, Angular, Node) may one day surpass the simplicity of the LAMP stack (Linux, Apache, MySQL, PHP) for web application development and deployment.” I chose to use DevOps Services (formerly JazzHub) to manage the source code for my project.

Echo Test Echo Test The first section of this page will let you do an HTML5 WebSocket test against the echo server. The second section walks you through creating a WebSocket application yourself. You can also inspect WebSocket messages using your browser. Try it out! [solved] How to autoclose a jquery ui dialog with timeout? - jQuery Forum - Waterfox hello, i am very new to jquery. there is one thing i can not get working. how can i autocloe a dialog?