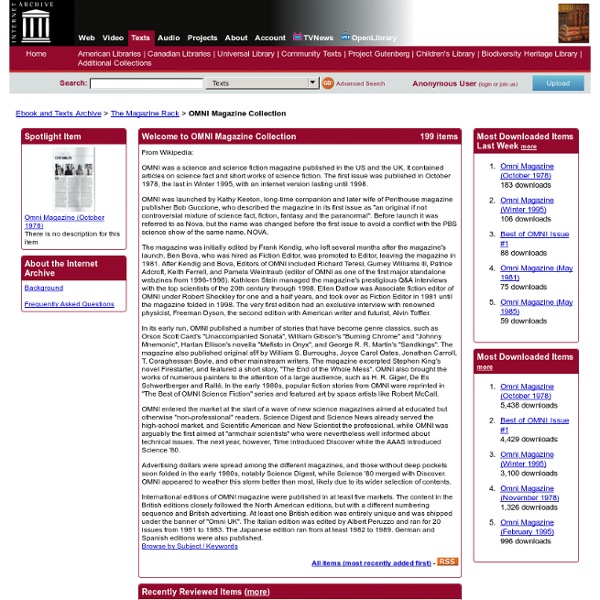 From Wikipedia: OMNI was a science and science fiction magazine published in the US and the UK. It contained articles on science fact and short works of science fiction. The first issue was published in October 1978, the last in Winter 1995, with an internet version lasting until 1998. OMNI was launched by Kathy Keeton, long-time companion and later wife of Penthouse magazine publisher Bob Guccione, who described the magazine in its first issue as "an original if not controversial mixture of science fact, fiction, fantasy and the paranormal". The magazine was initially edited by Frank Kendig, who left several months after the magazine's launch. In its early run, OMNI published a number of stories that have become genre classics, such as Orson Scott Card's "Unaccompanied Sonata", William Gibson's "Burning Chrome" and "Johnny Mnemonic", Harlan Ellison's novella "Mefisto in Onyx", and George R. International editions of OMNI magazine were published in at least five markets. Related:  Sci-Fi • literature

What is the weirdest work of science fiction you've ever seen? Recommended by Annalee Newitz Every Night, the Robot Waited for His Friend to Come Home San Francisco Is Harnessing Public Pressure to Increase Seismic Safety Why Are So Many People Living Underground in Beijing? Can You Guess What This Is An Image Of? The remains of Philip II of Macedon, father of Alexander the Great,... Apparently The Economic Downturn Is Cosplayers' Fault Did Scientists Just Develop A Viable Cure For Type 1 Diabetes? Possibly the World's Silliest (and Most Creative) Protest Against Cars Should You Really Be Blowing Your Nose Like That? In a new study on the sandwich-eating habits of Americans (the resu... Dracula Gets a Makeover for the ISIS Age in Dracula Untold Holy Crap What Is This Writhing Deep Sea Creature? Societies Where Women Outnumber Men Are Just As Violent As cities grow, their populations become more diverse -- on a speci... Your Bio-Engineered Penis Is Almost Ready What the Hell Is This Animal and Why Is It Moving Like That?

Truman Capote, Gay Talese, and Lester Bangs on how to write great nonfiction Photo by Carl Van Vechten/Library of Congress. Every weekend, Longform shares a collection of great stories from its archive with Slate. For daily picks of new and classic nonfiction, check out Longform or follow @longform on Twitter. Have an iPad? Each week we put together a collection of stories on a theme; this week’s theme is how those stories get written. Truman Capote, George Plimpton • New York Times • January 1966 A conversation about a new art form called “creative journalism,” conducted the same month In Cold Blood was published. “Twelve years ago I began to train myself, for the purpose of this sort of book, to transcribe conversation without using a tape-recorder. Katie Roiphe • Paris Review • Summer 2009 An interview with Talese on his career and daily writing routine. “INTERVIEWER: How do you write? Emily Brennan • Guernica • September 2012 An interview with Katherine Boo about how you cover the world’s poorest. George Orwell • Gangrel • June 1946 Notes for the next generation.

Pulp Science Fiction Under German Totalitarianism Strange, yesterday came across old German pulp magazines as I was researching the whole Eurospy genre. Rolf Torring, Kommissar X, Henry Cotton (of which they created a terrible, terrible reboot film) but most of all Perry Rhodan. I think PR is among the most popular ongoing SF pulp fiction in the world, there are still many, many readers. Flagged

Rapture of the Nerds by Cory Doctorow and Charles Stross Gondar primulon, Earthling! Welcome to the free CC-licensed ebook! We know that there's no way we could keep you from getting a free copy of this from some dodgy corner of the Internet. Rather than send you off to the kind of site you'd better visit through a proxy with your cookies turned off, we're giving you this-here free, pristine, hand-crafted ebook in a variety of formats. USA: Amazon Kindle (DRM-free) Barnes and Noble Nook (DRM-free) Google Books (DRM-free) Kobo (DRM-free) Apple iBooks (DRM-free) Amazon Booksense (will locate a store near you!) Canada: Amazon Kindle (DRM-free) Kobo (DRM-free) Chapters/Indigo Amazon.ca This book is distributed under a Creative Commons Attribution-NonCommercial-NoDerivs 3.0 license. You are free: to Share—to copy, distribute and transmit the work Under the following conditions: Attribution. More info here: See the end of this file for the complete legalese.

The Greatest Science Fiction Porn Movies of All Time: 1961-1991 [NSFW] Since you listed Barbarella and a few other not-quite-porn titles, you should also include the 1975 David Cronenberg classic Shivers, aka. "They Came from Within." Really, you can't go wrong with Cronenberg body horror, swinging 70's Canadian fashion, and a sentient venereal disease... And besides, how often do you get to break out the term "rampaging sex zombie pandemic?" (Though you wouldn't know any of that from looking at the trailer above, which I think features the only non-sexual scenes from the entire movie) Flagged Yeah, except we drew the line at horror — otherwise this list would have been twice as long and much much more revolting. Oops. Honestly, I really do read io9 for the articles.

Appian's Roman History The Author, the Manuscripts For now, only the Civil Wars, and only the English translation: although there is, that I know of, no Greek original of the work online anywhere, I do not plan to enter it myself, since those, now few, who read Greek will very likely have access to the TLG. For Appian's Foreign Wars, the links, in italics, are to the English translation at Livius. There is also a Greek text and an English translation online at Perseus. Translation The English translation is that by Horace White, first published in 1913 as part of the Loeb Classical Library. As almost always, I retyped the text by hand rather than scanning it — not only to minimize errors prior to proofreading, but as an opportunity for me to become intimately familiar with the work, an exercise which I heartily recommend: Qui scribit, bis legit. The transcription is being minutely proofread. Edition Used

The Matrix Virtual Theatre Matrix Virtual Theatre Wachowski Brothers Transcript Nov. 6, 1999 Welcome to the first live Virtual Theatre presentation in the world! Tonight you'll be able to watch The Matrix with special guests Andy and Larry Wachowski, the creators of the film. WachowskiBros: Hi! ILoveNatPortman says: Can you give any information on the sequels, or even confirm their existence? blindrocket says: Do you practice Martial Arts? AgentMartin says: Why didn't you both do the commentary on the DVD, time restraints? Hiryu says: Which Anime inspired you the most and why? AgentMartin says: Is there anything in The Matrix which you weren't too happy with; wished you could have done differently? blindrocket says: Would you consider yourselves computer nerds? AgentMartin says: Were you excited about DVD as a medium for your movies to go to the homes of the masses? Enigma says: What is the role or faith in the movie? Peter says: Will there be a directors' cut of The Matrix with any deleted scenes or out-takes?

Larry Niven – Flash Crowd | FROM EDGE to edge and for all of its length, from Central Los Angeles through Beverly Hills and West Los Angeles and Santa Monica to the sea, Wilshire Boulevard was a walkway. Once there had been white lines on concrete, and raised curbs to stop the people from interfering with the cars. Now the lines were gone, and much of the concrete was covered with soil and grass. There were even a few trees. Jerryberry Jansen lived in what had been a seaside motel halfway between Bakersfield and San Francisco. The east end of Wilshire Boulevard was a most ordinary T-intersection between high, blocky buildings. The mall had been a walkway when displacement booths were no more than a theorem in quantum mechanics. The explosive growth of the mall riot has taken enforcement agencies by surprise. For Eric Jansen and his family, displacement booths came as a disaster. In the morning there were messages stored in his phone. „Hello? Wash Evans was five feet four inches tall. „Sound is only part of it.

Complete Stories, by Rudy Rucker Complete Stories by Rudy Rucker Including collaborations with Bruce Sterling, Paul Di Filippo, Marc Laidlaw, John Shirley, Rudy Rucker Jr., Terry Bisson, and Eileen Gunn. Buy some of their works! Complete Stories is Copyright © 2013 Rudy Rucker as a volume, and the individual stories are copyrighted to their authors. I’ve arranged my stories in the order in which they were composed. Over the years I’ve published four print anthologies of my stories: The 57th Franz Kafka (Ace Books, 1983) Transreal! Gnarl! Mad Professor (Thunder’s Mouth Press, 2007). The final nineteen stories appearing in this, my new anthology, haven’t appeared in any of those four print anthologies. At this point in my career, I thought it would be futuristic to abandon print and to have my story anthology take on the form of an ebook, published by my own Transreal Press. I first assembled this collection in 2012, and what you see here is the 2013 edition. (4) My early mentor Robert Sheckley was a supremely witty writer.