DIY Air Conditioners – How to Make Your Own Cool Air 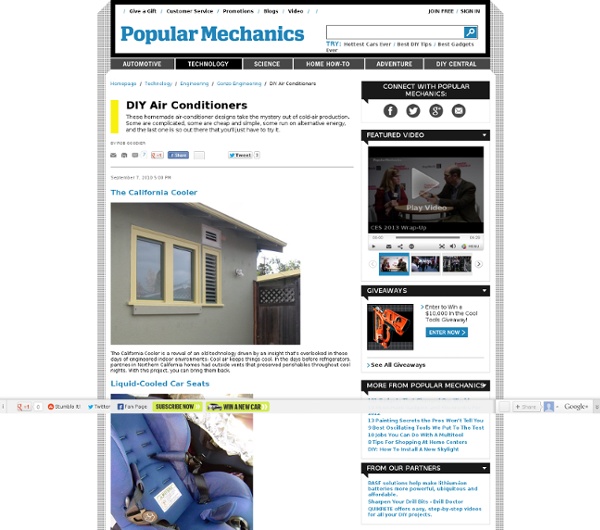 September 7, 2010 5:00 PM The California Cooler The California Cooler is a revival of an old technology driven by an insight that's overlooked in these days of engineered indoor environments: Cool air keeps things cool. In the days before refrigerators, pantries in Northern California homes had outside vents that preserved perishables throughout cool nights. With this project, you can bring them back. Liquid-Cooled Car Seats Afraid your baby's seat is getting too hot? Dew Bucket: An Evaporative Drink Cooler Consider these two facts: Evaporation cools things, and bottles can't sweat like people. Portable Air Conditioner This is a $10 air-conditioner built around an ice chest. Garden-Watering A/C Air conditioners can dump hundreds of gallons of water each year. Homemade A/C The mastermind behind these instructions built an air conditioner to circumvent a rule in the office. Related:  Garden • PermaMente • Sci/Tech

Canned Food Storage We have been looking for a way to store our canned food that takes up less space than just putting them on a shelf. We found inspiration on Pinterest and built our own self-rotating racks! With just a piece of plywood and some 1x3s and some 1x2s. Some L brackets and lots of screws we built this!! We made sure that the cans that we wanted to put here fit in each row. And on the wedge we screwed in an L bracket. We screwed two boards with an angled cut at the top to the wall and the rack had boards with opposite angle cuts on the back. Here is the first rack. And here are both! UPDATE We had a request for more information on the canned food rack that we posted a couple of months ago. If I was building it again, I'd use very thin plywood (1/4" or thinner) for the pieces that go on the front of the rack, instead of 1"x2". The angled piece at the bottom of each row of cans was just cut from a 2x4. Then I cut the 2x4 lengthwise in half at an angle.

10 Websites To Learn Photoshop Online Photoshop is hard. There are all kinds of commands, actions, effects, and tools that you’ve got to figure out, and the learning curve is one of the steepest you’ll ever encounter. (But it’s still better than the alternatives!) Fortunately, the web is chock-full of amazing resources that you can use to catapult yourself past the dreaded newbie/intermediate phases. With deliberate practice, you’ll be a Photoshop ninja in no time and your confidence will shoot through the roof. Here are 10 such resources for learning Photoshop on the web. Lynda one of the best educational sites on the web. Searching for “photoshop” results in over 450 unique tutorials, most of which are video courses that you can go through at your own pace. Lynda’s Basic plan costs $20 per month but comes with a 10-day free trial, so give it a try and see if you think it’s worth it. 2. TutsPlus is simply incredible. 3. Phlearn is probably the most popular Photoshop-centric resource of them all. 4. 5. 6. 7. 8. 9. 10.

Eco Homes from the Earth: 7 Ways to DIY Wouldn’t it be nice to own your own green dream home, made with recycled and natural materials and packed with custom features? Whether you’re an experienced builder or have never picked up a power tool in your life, you can build a natural eco-friendly home with user-friendly, low-cost materials like cob, cordwood, straw and the dirt and wood from your own land. These 7 natural building techniques produce beautiful homes with a small ecological footprint and tons of personality. Earthships and Hobbit Houses (images via dominicspics, ECOnscious, Earthship Biotecture) [youtube=L9jdIm7grCY] They seem to be a living part of the very earth itself, often with nothing but a façade and some windows to betray the presence of a home in the hillside. (images via: simondale.net) Among the most famous examples of a ‘hobbit house’ is “A Low Impact Woodland Home”, self-built in Wales for about 1000-1500 man-hours (over four months) and £3000. Cob (images via: ziggy fresh) [youtube=F0KDp00n4fs] Cordwood

End Times Report Dreams Make You Smarter, More Creative, Studies Suggest Here's more evidence that sleep, including napping, can make you smarter. Dreaming may improve memory, boost creativity, and help you better plan for the future, new research suggests. In a recent study, people who took naps featuring REM sleep—in which dreams are most vivid—performed better on creativity-oriented word problems. That is, the REM, or rapid eye movement, sleep helped people combine ideas in new ways, according to psychiatrist Sara Mednick, who led the study. Part of the experiment's morning round involved a word-analogy test, similar to some SAT problems. At midday, after the first round, the subjects were given a 90-minute rest period, during which they were monitored. Some participants took naps with REM sleep, which typically begins more than an hour after a person falls asleep. There was a second round of tests in the afternoon. Sleep Helps Turn Memories Into Predictions? Could REM sleep turn you into a crystal ball? "Nobody really knows," he said.

Freeze & Preserve Fresh Herbs in Olive Oil I found a great method to freeze & preserve fresh herbs in olive oil. Preserving herbs in oil reduces some of the browning and freezer burn that herbs can get in the freezer. It’s also a great way to have herbs ready immediately for winter stews, roasts, soups, and potato dishes. 8 Steps for Freezing Herbs in Oil Choose firm, fresh herbs, ideally from the market or your own garden.If you wish, you can chop them fine. Source: Thekitchn

Free Woodworking Plans, Projects, Patterns and Resourceful Information Free Plans Several free plans by Owen Geiger are now available: Preview the Economizer House Plan here.Economizer House Plan PDF Solar Pit House PDF Preview the Solar Pit House plan here. esert Shelters PDF Preview Desert Shelters by searching this phrase in the built-in search in the right hand column. Craftsman Bamboo/Plastic Bottle House PDF (Honorable Mention in Shelters for All housing competition) Preview the Craftsman plan here. oot Cellar Plan Earthbag House for Haiti View download complete complete plans at Teach Democracy.org. Want to see more plans? Realistic Self-Sufficiency by Robert Wayne Atkins Realistic Self-Sufficiency: The Do's and the Don'ts Copyright © July 22, 2009 by Robert Wayne Atkins, P.E. All rights reserved and all rights protected under international copyright law. Introduction The concept of becoming 100% self-sufficient is a very basic emotion that appeals to most people's survival instinct. For example, think about your last visit to the dentist. The following comments about self-sufficiency are based on my own personal viewpoints on each of the topics. The primary problem faced by our ancestors will be the same problem we would face today if we try to become 100% self-sufficient. However, if we were to reconsider our original objective, and not try to become 100% self-sufficient in everything, then it is possible for the average person to achieve some reasonable level of self-sufficiency - just not 100%. The following suggestions are based on the assumption of partial self-sufficiency as opposed to 100% self-sufficiency. An Early Life Lesson In Self-Sufficiency

Oldest Animal Life on Earth Found? - Scientists have discovered the world's oldest known animal fossils, dating to 650 million years ago. - The fossils, likely sponges, push back the fossil record for animals by about 70 million years. - The sponges existed before, and probably after, a severe "Snowball Earth" event that covered much of the globe in ice. Animals have been on Earth for at least 650 million years, suggest recently found primitive sponge fossils from South Australia. This discovery pushes back the fossil record for animals by about 70 million years, according to a new study published in the journal Nature Geoscience. SEE ALSO: Top 10 Longest Living Animals The prior oldest known hard-bodied animals were reef-dwelling organisms called Namacalathus, which date to approximately 550 million years ago. The even more advanced age of the newly found sponge fossils provides direct evidence that animal life existed before the severe "Snowball Earth" event. SEE ALSO: Are Sponges the World's Most Successful Animals?

Easy Aquaponics from "mostly" re-purposed materials What really prompted this project was the fact I was getting very tired of the fire ants getting into my raised beds. After losing much of my crops to ants, I decided I was going to grow in water via hydroponics. Then, I learned about Aquaponics and it was on. Thanks to the help of my son, all of the 6" screws were taken out of these timbers, we cut them to size and ultimately built a smaller version for the tank and used some of the pieces for legs and supports on the grow bed. The size of my grow bed and the size of my tank were based on mathematical calculations made by me based on the amount of pond liner I had available to me.