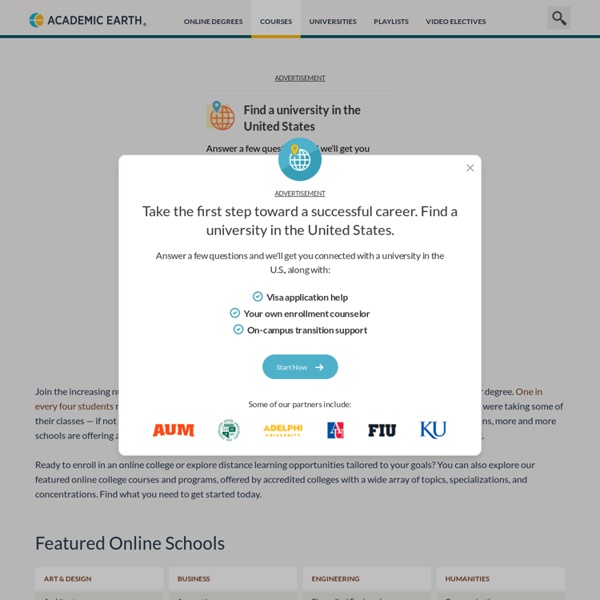 Join the increasing number of students enrolling in online college courses and start earning credits towards your degree. One in every four students now take at least one class online, and during the fall 2014 term, 5.8 million college students were taking some of their classes — if not all of them — through distance learning. To keep up with increasing demand for online options, more and more schools are offering a variety of courses that can be completed remotely, allowing you more flexibility in learning. Looking to enroll in an online college? Browse our featured online programs below and request information from an online college today. Ready to enroll in an online college or explore distance learning opportunities tailored to your goals? Since 2008, Academic Earth has worked diligently to compile an ever-growing collection of free online college courses from some of the most respected universities.

High School Financial Literacy Curriculum: Building Your Future The Actuarial Foundation is proud to make Building Your Future, an award-winning financial literacy curriculum resource, available to U.S. high schools. Building Your Future is designed to help teens master the elements of personal finance and prepare for life on their own. Building Your Future gives students multiple opportunities to practice core skills and showcases the real-world impact of the financial decisions they make. Each of the four books in the series are classroom-ready with a teacher's guide that includes handouts, answer keys, instruction and assessment suggestions.

50 Fictional Days Immortalized in Literature Today is April 4th, the day on which George Orwell’s 1984 famously begins—in the year 1984, of course (a year that seems rather closer than usual right now). Inspired by this literary holiday of sorts, I went out in search of other notable fictional dates—that is, specific days on which something interesting happens in literature (as opposed to actual events that are reported in novels, as background or otherwise). I’m sure there are an infinite number of these out there, but there are also an infinite number of books in which the author never pins down the events at all, rather letting them float in the reader’s imagination—an approach that certainly has its merits.

List of Values The following list of values will help you develop a clearer sense of what's most important to you in life, as explained in the article Living Your Values. Simply print out this page, mark the values which most resonate with you, and then sort your list in order of priority. As you scan the values list below, you may find that while most values have little or no significance to you (and some may even seem negative to you), there are those values that just jump out and call to you, and you feel, "Yes, this value is part of me." This values list is merely a guide. It is lengthy and contains many synonyms but is certainly not exhaustive, so feel free to add unlisted values to your own list as well. Twelve Virtues of Rationality by Eliezer Yudkowsky by Eliezer Yudkowsky The first virtue is curiosity. A burning itch to know is higher than a solemn vow to pursue truth.

The Shapes of CSS Learn Development at Frontend Masters CSS is capable of making all sorts of shapes. Squares and rectangles are easy, as they are the natural shapes of the web. Add a width and height and you have the exact size rectangle you need. Add border-radius and you can round that shape, and enough of it you can turn those rectangles into circles and ovals. Free Homeschool High School Credit Planner - Five J's Homeschool Planning coursework for high school can be a daunting task. How do I know which courses my child needs to take? Will my child have enough credits in each subject to meet my state's graduation requirements? Will my child meet the admission requirements for his college of choice? I had the same questions last year when my son started his freshman year of high school. I knew I needed to look at the big picture to make sure that we didn't end up behind in his coursework.

Sorry, Ebooks. These 9 Studies Show Why Print Is Better Don’t lament the lost days of cutting your fingers on pristine new novels or catching a whiff of that magical, transportive old book smell just yet! A slew of recent studies shows that print books are still popular, even among millennials. What’s more: further research suggests that this trend may save demonstrably successful learning habits from certain death. Moral relativism Moral relativism may be any of several philosophical positions concerned with the differences in moral judgments across different people and cultures. Descriptive moral relativism holds only that some people do in fact disagree about what is moral; meta-ethical moral relativism holds that in such disagreements, nobody is objectively right or wrong; and normative moral relativism holds that because nobody is right or wrong, we ought to tolerate the behavior of others even when we disagree about the morality of it. Not all descriptive relativists adopt meta-ethical relativism, and moreover, not all meta-ethical relativists adopt normative relativism. Richard Rorty, for example, argued that relativist philosophers believe "that the grounds for choosing between such opinions is less algorithmic than had been thought", but not that any belief is equally as valid as any other.[1] Variations[edit] Descriptive[edit]

The L-Space Web: Death and What Comes Next The L-Space Web Copyright © Terry Pratchett 2002 When Death met the philosopher, the philosopher said, rather excitedly: "At this point, you realise, I'm both dead and not dead." There was a sigh from Death. Oh dear, one of those, he thought. This is going to be about quantum again.

ngh... hate to look a gift horse in the mouth here, but, this guy's demeanor is messing with my enthusiasm. anyone make it past the first video? if so does it get any better or make you wish you'd never heard of an algorithm? by 5footshelflife Jan 31