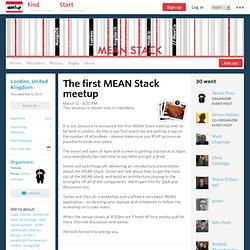 As this is our first event we are putting a cap on the number of attendees - please make sure you RSVP as soon as possible to book your place. The event will open at 6pm with a view to getting started at 6:30pm, once everybody has had time to say hello and get a drink. Simon will kick things off, delivering an introductory presentation about the MEAN Stack. Simon will talk about how to get the most out of the MEAN stack, and build an architecture playing to the strengths off all of the components. You are IT! About M101JS. Building AngularJS and Node.js Apps with the MEAN Stack. Introduction to the MEAN Stack, Part One: Setting Up Your Tools. I’ve received several emails asking for instructions on how to set up a basic MEAN stack app. 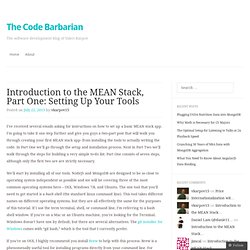 I’m going to take it one step further and give you guys a two-part post that will walk you through creating your first MEAN stack app- from installing the tools to actually writing the code. In Part One we’ll go through the setup and installation process. Next in Part Two we’ll walk through the steps for building a very simple to-do list. Part One consists of seven steps, although only the first two are are strictly necessary. We’ll start by installing all of our tools. If you’re on OSX, I highly recommend you install Brew to help with this process. 1) Installing MongoDB- First, we’re going to install MongoDB.OSX: Open up your Terminal window and run Ubuntu: Open up your shell and run: Windows: Go to and download the latest version of MongoDB for Windows, which should be a plain zip file. That’s it! Directly from your command line on Mac and Ubuntu. Or on Windows. (Instructions from Ubuntu: Build a real-time polls application with Node.js, Express, AngularJS, and MongoDB.

Recently while lecturing on HTML5 to a large group of students, I wanted to poll them and display their voting results, updating in real-time. 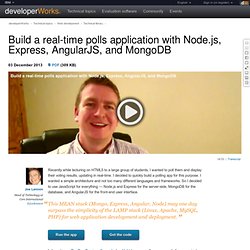 I chose to use DevOps Services (formerly JazzHub) to manage the source code for my project. What you'll need to build your app A basic familiarity with Node.js, and a Node.js development environmentThese Node.js modules: Express framework, Jade, Mongoose, and socket.ioAngularJS JavaScript frameworkMongoDB NoSQL databaseThe Eclipse IDE, with the Nodeclipse plug-in installed. Setting Up a MEAN Stack Single Page Application.

Beginning an application from scratch can sometimes be the hardest thing to do. 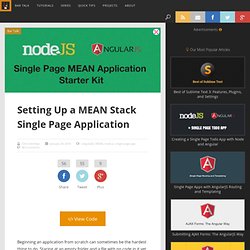 Staring at an empty folder and a file with no code in it yet can be a very daunting thing. In today’s tutorial, we will be looking at the starting setup for a Node.js, AngularJS, MongoDB, and Express application (otherwise known as MEAN). I put those in the wrong order, I know. AngularJS Tutorial: Learn to Build Modern Web Apps. Blog. By Valeri Karpov, Kernel Tools engineer at MongoDB and and co-founder of the Ascot Project. 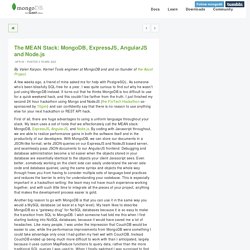 A few weeks ago, a friend of mine asked me for help with PostgreSQL. As someone who’s been blissfully SQL-­free for a year, I was quite curious to find out why he wasn’t just using MongoDB instead. It turns out that he thinks MongoDB is too difficult to use for a quick weekend hack, and this couldn’t be farther from the truth. I just finished my second 24 hour hackathon using Mongo and NodeJS (the FinTech Hackathon co­sponsored by 10gen) and can confidently say that there is no reason to use anything else for your next hackathon or REST API hack. First of all, there are huge advantages to using a uniform language throughout your stack. Another big reason to go with MongoDB is that you can use it in the same way you would a MySQL database (at least at a high level). As a NoSQL database, MongoDB also allows us to define our schema entirely on the code side. Var User = db.model('users', UserSchema); A Fullstack Javascript Framework.