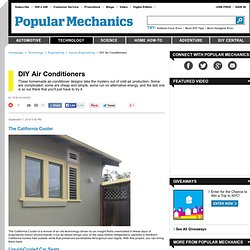 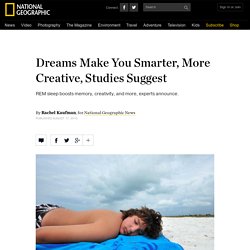 Dreaming may improve memory, boost creativity, and help you better plan for the future, new research suggests. In a recent study, people who took naps featuring REM sleep—in which dreams are most vivid—performed better on creativity-oriented word problems. That is, the REM, or rapid eye movement, sleep helped people combine ideas in new ways, according to psychiatrist Sara Mednick, who led the study. Early Jupiter Feasted on Super-Earths. Oldest Animal Life on Earth Found? - Scientists have discovered the world's oldest known animal fossils, dating to 650 million years ago. - The fossils, likely sponges, push back the fossil record for animals by about 70 million years. - The sponges existed before, and probably after, a severe "Snowball Earth" event that covered much of the globe in ice. 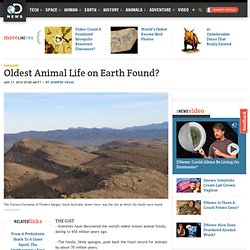 Animals have been on Earth for at least 650 million years, suggest recently found primitive sponge fossils from South Australia. This discovery pushes back the fossil record for animals by about 70 million years, according to a new study published in the journal Nature Geoscience. SEE ALSO: Top 10 Longest Living Animals The prior oldest known hard-bodied animals were reef-dwelling organisms called Namacalathus, which date to approximately 550 million years ago. The even more advanced age of the newly found sponge fossils provides direct evidence that animal life existed before the severe "Snowball Earth" event.

ADHD Linked to Pesticide Exposure. Mystery of the Missing Ocean Plastic. Cell Phone Sees in the Dark. Martian Environment Is Ideally Suited For Crop Farming, Study Says. AMPERE, The First System for Tracking Space Weather in Real Time, Goes Live. The solar flare that slammed into Earth's atmosphere earlier this month was a prescient reminder that solar weather -- though sometimes beautiful -- can have serious impacts on the Earth. 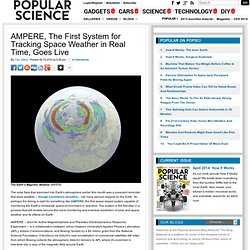 So perhaps the timing is right for something like AMPERE, the first space-based system capable of monitoring the Earth's immediate space environment in real-time. The system is the first step in a process that will enable around-the-clock monitoring and eventual prediction of solar and space weather and its effects on Earth. AMPERE -- short for Active Magnetosphere and Planetary Electrodynamics Response Experiment -- is a collaboration between Johns Hopkins University's Applied Physics Laboratory (APL), Iridium Communications, and Boeing, funded by a $4 million grant from the National Science Foundation. 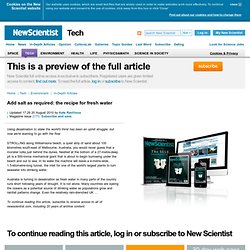 First gold-iron alloy shows power of magnetic attraction - tech - 19 August 2010. GOLD readily forms alloys with the precious metals silver and palladium, but it normally blends with cheap iron about as well as oil mixes with water. 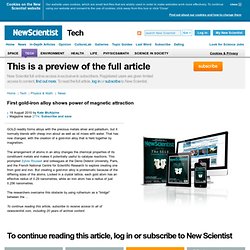 That has now changed, with the creation of a gold-iron alloy that is held together by magnetism. The arrangement of atoms in an alloy changes the chemical properties of its constituent metals and makes it potentially useful to catalyse reactions. Darwinian medicine: Does intensive care kill or cure? - health - 19 August 2010. We've evolved ways to come back from the brink of death – and doctors' efforts to help may just be getting in the way NOTHING epitomises cutting-edge medicine so much as a modern intensive care unit.

Among the serried ranks of shiny chrome and plastic surrounding each bed are machines to ventilate the lungs and keep failing kidneys functioning, devices to deliver drugs intravenously and supply sedatives, tubes to get food into a patient and waste out, and countless gizmos to monitor blood composition, heart rate, pulse and other physiological indicators. This environment is home to Mervyn Singer, director of the Bloomsbury Institute Centre for Intensive Care Medicine at University College London. Brain training improves acting skills - life - 19 August 2010. SOME actors go to extreme lengths to prepare for a role: Daniel Day-Lewis spent months in a wheelchair to get into character for My Left Foot. 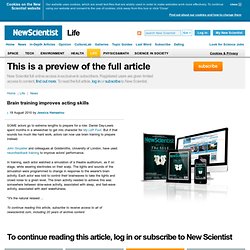 But if that sounds too much like hard work, actors can now use brain training to prepare instead. John Gruzelier and colleagues at Goldsmiths, University of London, have used neurofeedback training to improve actors' performance. Infrared chlorophyll could boost solar cells - tech - 19 August 2010. Nature still has plenty to teach us about harnessing the sun's energy. 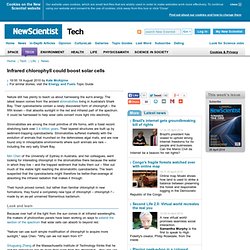 The latest lesson comes from the ancient stromatolites living in Australia's Shark Bay. Their cyanobacteria contain a newly discovered form of chlorophyll – the fifth known – that absorbs sunlight in the red and infrared part of the spectrum. It could be harnessed to help solar cells convert more light into electricity. How collapsing bubbles could shoot cancer cells dead - health - 20 August 2010. Killer T-cells, the fix for organ rejection? - health - 21 August 2010. A CONVENIENT type of killer white blood cell could make organ rejection a thing of the past. 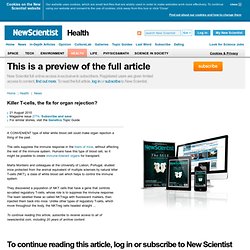 The cells suppress the immune response in the livers of mice, without affecting the rest of the immune system. Humans have this type of blood cell, so it might be possible to create immune-tolerant organs for transplant. Marta Monteiro and colleagues at the University of Lisbon, Portugal, studied mice protected from the animal equivalent of multiple sclerosis by natural killer T-cells (NKT), a class of white blood cell which helps to control the immune system.

They discovered a population of NKT cells that have a gene that controls so-called regulatory T-cells, whose role is to suppress the immune response. 25,000 New Asteroids Found by NASA's Sky Mapping. Moderate sleepers avoid an early grave. Skimping on sleep, or overindulging, will heighten your risk of developing cardiovascular disease, according to a new study. 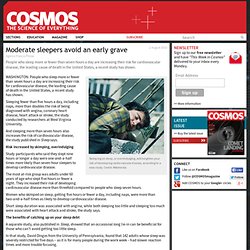 Credit: Wikimedia WASHINGTON: People who sleep more or fewer than seven hours a day are increasing their risk for cardiovascular disease, the leading cause of death in the United States, a recent study has shown. Sleeping fewer than five hours a day, including naps, more than doubles the risk of being diagnosed with angina, coronary heart disease, heart attack or stroke, the study conducted by researchers at West Virginia University. She shoots, she scores! Scientists finding how crucial bacteria can be to health. Scientists plumb the depths to ask how many fish in the sea. Loneliness will kill you, scientists caution. How Brilliant Computer Scientists Solved the Bermuda Triangle Mystery. Aug-06-2010 14:30. Ten technologies that should be extinct (but aren't) - Technology & science - Tech and gadgets - PC World. 'Big Solar' Struggles To Find Home In California - NewsTrust.net. Scientists Dispute Government Stance on the Lingering Effects of Gulf Oil - NewsTrust.net.

Russia will operate the Bushehr plant in southern Iran, supplying its nuclear fuel and taking away the nuclear waste. Iran has been subject to four rounds of UN sanctions because of its separate uranium enrichment programme. An iPad at the office: Can it work as a PC? Robot Explorer Set to Reveal Secrets of Great Pyramid of Giza.