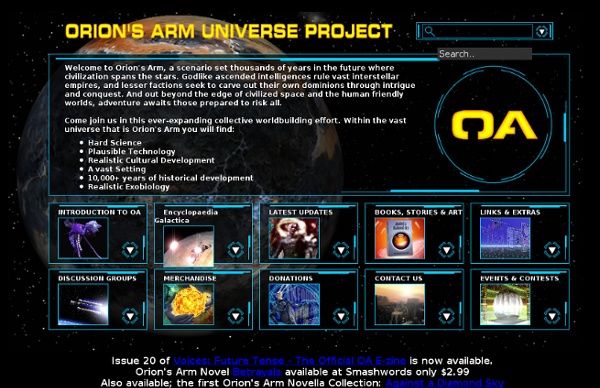 Welcome to Orion's Arm, a scenario set thousands of years in the future where civilization spans the stars. Godlike ascended intelligences rule vast interstellar empires, and lesser factions seek to carve out their own dominions through intrigue and conquest. And out beyond the edge of civilized space and the human friendly worlds, adventure awaits those prepared to risk all. Come join us in this ever-expanding collective worldbuilding effort. Within the vast universe that is Orion's Arm you will find: Hard Science Plausible Technology Realistic Cultural Development A vast Setting 10,000+ years of historical development Realistic Exobiology

Information Database If you read a Cyberpunk manifesto, by Christian Kirtchev, you probably noticed the intro and outro addressing a group, called "Electronid Minds". The intention was to bring forward a group by presenting its manifesto. By the time manifesto was published (1997) digital underground groups were ruling the Bulletin Board System (BBS) domains of data and information exchange. Electronic Minds however was never announced elsewhere as a group in digital underground quality or otherwise.

Home Your imagination has been captured by the roaring rockets from Heinlein's SPACE CADET or the Polaris from TOM CORBETT, SPACE CADET. But are such rockets possible? How does one go about defining the performance of these atomic-powered cruisers? This document gives some hints and equations that will allow back-of-the-envelope calculations on such matters. The 8 Most Common Sci-Fi Visions of the Future (And Why They'll Never Happen) The future promises to be so wonderous and terrifying that it will exceed even the furthest reaches of the human imagination. Though this is not saying much, as the human imagination has really only been able to think up eight possible futures: An Oppressive Totalitarian State Defining Features: Forcibly proscribed social roles and classes; a creepy, overbearing "beloved leader" and equally creepy propaganda posters on every wall; an ultra-brutal police force; the repression of all written communication and creativity; a huge underclass of drone-like proles paralyzed with paranoid anxiety; a moratorium on rainbows, strawberry ice cream and butterfly kisses. Basically, it's the Cold War-era Soviet Union. Origins:

thought experiments lain: a serial experiments lain information site serial experiments lain is an anime which begs to be interpreted (read my review for a basic description of the show). While the story gives us a lot of hints as to what might be going on, nothing is ever explicitly explained. Even when things are explained in the form of commentary and "speeches" throughout the show, we are shown that the views put forth in those speeches (such as given by Eiri Masami) are not necessarily correct and truthful. When dealing with prophetic speech or prophetic anime, it is our responsibility to be skeptical and questioning just like Lain was, even though the uncertainty can be painful at times. Yet, it wasn't so painful. serial experiments lain could have easily fallen into the same trap that so many other "meaningful" anime fall into, that is: take itself too seriously. By refusing to explain itself any more than it did, serial experiments lain avoids that trap.

Questions to guide you in worldbuilding for fantasy or science-fiction — Veronica Sicoe I’ve been busy worldbuilding this week. It’s one of my favorite things to do in the process of writing sci-fi, and it makes me all giddy and drooly like a kid that’s been dropped into a toybox. Since I revisited my collected materials for the worlds I’m writing in, and have overhauled one of these entirely, I grabbed the opportunity to put together a list of important worldbuilding questions to share with you.

The Wrong Way to Plan for the Future Interesting stuff. I still like this guy's take on it: [www.youtube.com] starting at around 36:00. He points out that we've actually known about this idea for a very long time: There's a line in the Sermon on the Mount. Essays - Swords & Swordsmanship Newest Prowess is a "Three-Legged Stool" Some Observations on Engagement Posture With the Rapier On Walking Fencing A Foray into Fiore's Metaphor: Context for Studying His Dagger Section The Ongoing Challenge of Modern Sword Design and Sword Making

The Hugo Awards : Hugo Award FAQ What are the Hugo Awards? The Hugo Awards, to give them their full title, are awards for excellence in the field of science fiction and fantasy. They were first awarded in 1953, and have been awarded every year since 1955. The awards are run by and voted on by fans. When are the Hugo Awards presented? reality check - Could Mobile cities exist? - Worldbuilding Stack Exchange Hovering cities are too impractical, as my own answer to the link post goes into detail about. If your low to the ground you run into trees, mountains, etc. If your higher up you run into heavy winds. The Future of Graveyards I am a taphophile, and have been one since birth. It saddens me to think that cemeteries might no longer be the places that I've come to love and the wonderful places in which I enjoy spending my time. I spent many, many hours as a teenager and in my 20's, peacefully roaming around the cemeteries of New England; often I would just find a comfortable spot and read. There's something about the tangibleness of the old tombstones and crypts that speaks to me, and that I find very personally important; I touch them and for a moment I'm connected to those people, wondering what they might have been like, wondering what their lives, their families, their deaths were like. That connection I feel to history is part and parcel of my personal makeup. And the epitaphs!

Why Create & Build a Fantasy World? Building a fantasy world is a fun and personally rewarding past-time. There are many ways to build a fantasy world and many different reasons why you might want to build one. The art of Fantasy world building is used for a variety of entertainment mediums including fantasy books, movies, plays, games and hobbies. In a recent poll at Jacmus-Prime.com 39% of participants who had responded at the time of publishing this article, are creating a fantasy world as background material for a book while 28% are creating a world for a hobby. Though there a few different preferred methods of fantasy world building that can assist a world builder to construct the foundations for a well built world, there is no one way or right way to build a world.