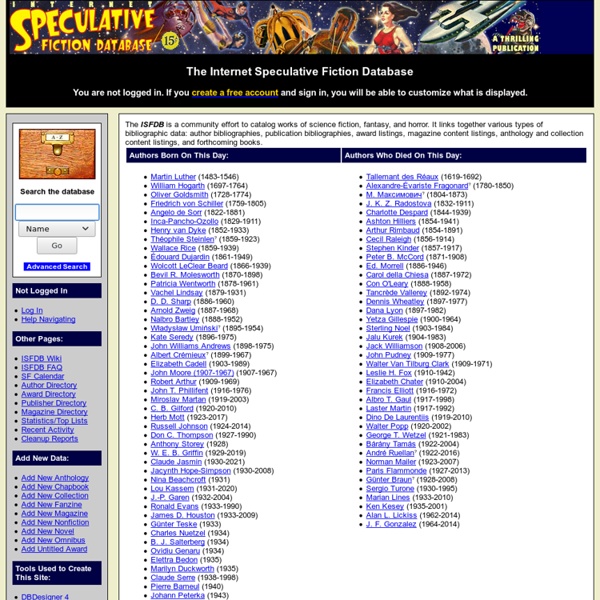 How to Build a Universe That Doesn't Fall Apart Two Days Later First, before I begin to bore you with the usual sort of things science fiction writers say in speeches, let me bring you official greetings from Disneyland. I consider myself a spokesperson for Disneyland because I live just a few miles from it—and, as if that were not enough, I once had the honor of being interviewed there by Paris TV. For several weeks after the interview, I was really ill and confined to bed. Connections: 50 authors, 50 science fiction stories shorter than novels I've been playing around with re-reading favorite science fiction short stories while also seeing if there's anything that has managed to elude me over the years. I've also tried to catch up with more recent authors given that I don't read as many books as I used to. (The market for science fiction short stories, in general, is in something of a decline but there are still some fabulous recent stories out there.) A few rules I set for myself: One story per author. Certainly there are many on this list for whom I could effortlessly reel off multiple deserving entries.

A Visual Timeline of AI Predictions in Science Fiction As anyone who’s started a company knows, choosing a name is no easy task. There are many considerations, such as: Are the social handles and domain name available?Is there a competitor already using a similar name? Sir Gawain and the Green Knight Preface to First Edition The poem of which the following pages offer a prose rendering is contained in a MS., believed to be unique, of the Cottonian Collection, Nero A.X., preserved in the British Museum. The MS. is of the end of the fourteenth century, but it is possible that the composition of the poem is somewhat earlier; the subject-matter is certainly of very old date. There has been a considerable divergence of opinion among scholars on the question of authorship, but the view now generally accepted is that it is the work of the same hand as Pearl, another poem of considerable merit contained in the same MS.

H.P. Lovecraft Highlights the 20 "Types of Mistakes" Young Writers Make Image by Lucius B. Truesdell, via Wikimedia Commons H.P. Lovecraft is remembered as a brilliant fantasist, a creator of a completely unique universe of horror. Your Picks: Top 100 Science-Fiction, Fantasy Books More than 5,000 of you nominated. More than 60,000 of you voted. And now the results are in. The winners of NPR's Top 100 Science-Fiction and Fantasy survey are an intriguing mix of classic and contemporary titles. Over on NPR's pop culture blog, Monkey See, you can find one fan's thoughts on how the list shaped up, get our experts' take, and have the chance to share your own. A quick word about what's here, and what's not: Our panel of experts reviewed hundreds of the most popular nominations and tossed out those that didn't fit the survey's criteria (after — we assure you — much passionate, thoughtful, gleefully nerdy discussion).

These Are the Greatest Geek Books of All Time, Readers Say inShare0 We revealed our ultimate reading list in "9 Essential Geek Books You Must Read Right Now" last week. Now Wired.com readers have spoken, voting for their favorites from the list and submitting many awesome literary picks of their own. Short Stories Online Homepage > Resources > Web Sites > Short Stories Online These Philip K. Dick stories come from Project Gutenberg and are stories that were written early in his career. For more reading formats, visit that site. Only html and text are provided here. Beyond Lies the Wub html text Beyond the Door html text Mr.

The Harvard Classics: A Free, Digital Collection During his days as Harvard’s influential president, Charles W. Eliot made a frequent assertion: If you were to spend just 15 minutes a day reading the right books, a quantity that could fit on a five foot shelf, you could give yourself a proper liberal education. The publisher P. F. Collier and Son loved the idea and asked Eliot to assemble the right collection of works.