Murphy Laws Site - The origin and laws of Murphy in one place. 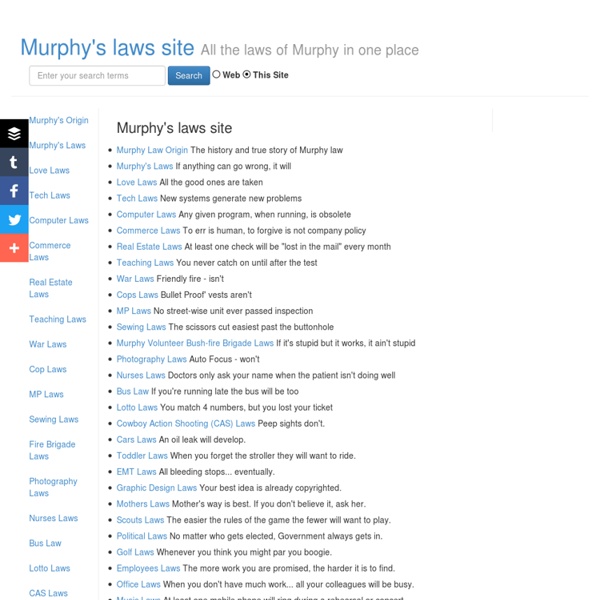 64 Things Every Geek Should Know - laptoplogic.com The term ‘geek’, once used to label a circus freak, has morphed in meaning over the years. What was once an unusual profession transferred into a word indicating social awkwardness. As time has gone on, the word has yet again morphed to indicate a new type of individual: someone who is obsessive over one (or more) particular subjects, whether it be science, photography, electronics, computers, media, or any other field. A geek is one who isn’t satisfied knowing only the surface facts, but instead has a visceral desire to learn everything possible about a particular subject. The Worst Of The Best: First World Problems So you were lucky enough to be born into the confines of a developed country, enjoying a relatively easy life in comparison to thousands of years of human toil and misery. Maybe sometimes you even think about how truly lucky you are in comparison to how a majority of people live in the world currently. And yet… there are always those nagging little problems that manage to turn your little world upside down. And so we present, first world problems: The Internet Is Out (What Do I Do!)

At the right moment - part 7 (16 pictures) Funny photos taken at the right moment from the right angle. Previous part: At the right moment – Part 6 [via] [via] - StumbleUpon RGB Color est e pluribus unus RGB is a work about the exploration of the “surface’s deepness”. RGB designs create surfaces that mutate and interact with different chromatic stimulus.

Cast Thermite So you made it through the intro? Good. There's something that must be said before we go any further. I'm not liable. For anything. Do your homework and be sure you know what safety precautions to take when handling something like thermite, such as not looking at it during ignition since it gives off harmful ultraviolet light!

Don't Stop Procrastinating. Just Procrastinate Better. by Robert Montenegro Procrastination is often unfairly regarded as productivity's evil twin, writes Donné Torr over at Hootsuite. Sure, procrastinators can be slow and unreliable, but there exists research to suggest not all people who put things off are unproductive. Whether it's the sort of "research" that's not worth the paper it's printed on, I'll leave for you to decide. 23 Fascinating and Forgotten Monuments from Yugoslavia Podgaric – Photograph by Jan Kempenaers Below you will find an incredible collection of photographs by Jan Kempenaers. All of the images are from his book, simply titled Spomenik. You can find the book for sale through his publisher Roma Publications or on Amazon.

At the right moment - Part 4 (26 pictures) Cool and funny photos taken at the right moment from the right angle. Part 5: link MNN - Mother Nature Network - StumbleUpon Mighty power from tiny atoms A nuclear power plant is not all that different from coal, oil, or gas fueled plants. The main difference is that at a nuclear power plant, the heat used to make steam is produced by fission. Fission is the splitting of atoms into smaller parts. Some atoms, themselves tiny, split when they are struck by even smaller particles, called neutrons.

Things My Father Didn’t Teach Me ABOUT ARCHIVE FOLLOW Facebook Twitter Instagram Google+ Ads Via The Deck Things My Father Didn’t Teach Me share it happyfathersday 4,393 notes How to Do Nothing with Nobody All Alone by Yourself: A Timely Vintage Field Guide to Self-Reliant Play and Joyful Solitude by Maria Popova A celebration of makers and hackers from half a century before they were called makers and hackers. Legendary psychoanalyst Adam Phillips has written beautifully about why the capacity for boredom is essential for a full life and Susan Sontag contemplated the creative purpose of boredom.

The Top 50 'Pictures of the Day' for 2011 Every day at 5pm the Sifter posts the Picture of the Day. Below you will find a collection of the Sifter’s Top 50 from 2011. It’s hard to imagine the year is almost over, time seems to fly faster each successive year so it’s fun to take a moment and look back at the year that was. Click any of the pictures below to be taken to the individual post to learn more about the photographer and picture taken. At the right moment - part 5 (16 pictures) Cool and funny photos taken at the right moment from the right angle. Previous part: At the right moment – Part 4 Via: [Perfectly Timed Photos] and [Fishki.net]