10 Crazy Scifi Plot Devices That We'd Like to See 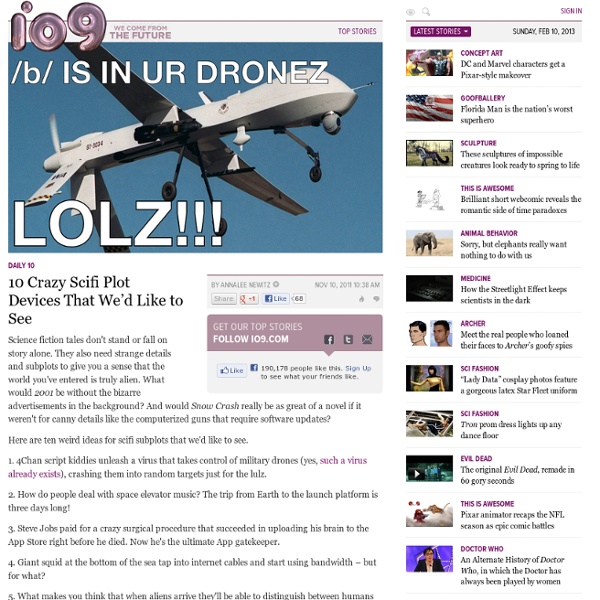 "1. 4Chan script kiddies unleash a virus that takes control of military drones (yes, such a virus already exists), crashing them into random targets just for the lulz." Would it be more likely that virus or worm would instead keep fetching porn images from 4Chan and then display them on the operator's monitors as the drone useless crashed into a children's orphanage or something? "2. How do people deal with space elevator music? The trip from Earth to the launch platform is three days long!" I'm think this would be handled in the same why as cruise ships or train travel, lots of movies, books to read and shuffleboard. "3. I'd rather see that happen to Dennis Richie, who died at roughly the same time, and in co-creating Unix and writing the first C compiler, had at least as large affect on the world as Jobs and Woz did. Sadly his death got almost no fanfare in the press. "4. For this! [www.youtube.com] "5. That is a frighteningly serious possibility. "6. Actually I think Gibson did this. "7.

religion in fantasy novels | helluo librorum Since no one burned my house down after the Tolkien post, I’m going out on a limb here and talk to you about using religion in your fantasy novels. Generally speaking, when building worlds in fantasy novels, the religions of your world will be a reflection of the religions here on good old planet earth. So I’m going to offer a few suggestions – take them or leave them: Know thy religion. If you’re basing your world’s religion on an existing faith thoroughly understand those beliefs. If all you have is superficial knowledge of a religion, it will show in your writing; at best you will look inexperienced, at worst, like an idiot. Understand the core beliefs. Avoid stereotypes. Religions don’t kill. Treat all religions with respect. Don’t be malicious. World building is a difficult process; as a fantasy writer you are creating a whole social order, and you want it to be believable. A few articles to see: Like this: Like Loading... Please visit my web site at: www.teresafrohock.com

Write It Sideways » Blog Archive » 5 Visual Strategies for Plotting Your Novel I don’t know about you, but for me, plotting a full-length novel is one of the most difficult aspects of writing. I tend to come up with a great premise, but turning that into a plot becomes a lot of work. I don’t usually get it right the first time, either. Personally, what works best for me during this outlining process is to have plenty of visual material on hand. Here are 5 visual strategies I have used for outlining: 1. Pictures are a great way to visualize your plot, setting, and characters. You can keep either a digital file of pictures on your computer (taken yourself with a digital camera, or ones you find on the internet), or a real file with film pictures/magazine cutouts. Whichever you use, make sure you hold onto them for when you start actually writing. 2. There are a few different types of writing software on the market, all of which help you organize your projects into bite-sized pieces for ease of writing and revising. 3. 4. 5. Visualize Your Plot

10 Steps to Finding Your Writing Voice Bonus: Need help finding your writing voice? Click here for free tips. I write only because / There is a voice within me / That will not be still.–Sylvia Plath Awhile ago, I wrote an article called, “Finding Your Blog’s Unique Voice.” In it, I explain that a blog needs a voice that is both exclusive and authentic. Photo credit: Dan Foy (Creative Commons) But here, I want to share a little bit more about how to find your overall writing voice. Spending some time deliberating over voice is worth your attention and focus. If you struggle with getting people to read your writing or with staying consistent in your craft, you need to stop chasing numbers and productivity and reboot. An exercise for finding your voice Not sure where to start? Describe yourself in three adjectives. Why do you need a writing voice? Finding your voice is the key to getting dedicated followers and fans and that it’s the only sustainable way to write. Once you’ve found your voice, make sure you continue to develop it.

Doctor Who Timeline Infographic | CableTV.com Check out this complete timeline of Doctor Who from 1963 to present, including episodes, seasons, companions, villains, and more. Scroll down to follow all the Doctor's adventures through time. A Fantastic resource for any Doctor Who fan. Adventure Titles An Unearthly Child The Daleks The Edge of Destruction Marco Polo The Keys of Marinus The Aztecs The Sensorites The Reign of Terror Planet of Giants The Dalek Invasion of Earth The Rescue The Romans The Web Planet The Crusade The Space Museum The Chase The Time Meddler Galaxy 4 Mission to the Unknown The Myth Makers The Daleks' Master Plan The Massacre of St. Share on Tumblr Pin It Embed this on your site: <a href=" src=" alt="Doctor Who Timeline Infographic" /></a><br />Via: <a href="

Visit the amazing “Steampunk House” in Sharon, MA Take advantage of this unique opportunity to tour the much talked about “Steampunk House”. Owners Bruce and Melanie Rosenbaum of ModVic (Modern Victorian Home Restoration) have graciously agreed to allow their celebrated Steampunk Home to be included in the Sharon Historical Society’s 2010 Old House Tour. The Steampunk House is so named because of the of the remarkable modern Victorian gadgetry and inventions found throughout. This lovely 1901 Victorian Craftsman home features leaded glass windows, Eastlake style antique furniture and numerous Modern Victorian innovations. The Sharon, Massachusetts Historical Society’s Old House Tour will take place on Sunday, May 2nd, 2010, from 1:00 PM to 4:00 PM, rain or shine. A very special Arts & Crafts style home will also be on the tour. Also see a shingle-style Victorian which has been completely restored, but maintains its antique charm. For photos of the houses and more information, visit sharonhistoricalsociety.org.

Conquering the Fear of Writing: Overcoming the Worries That Attack Writers Fear is an integral part of life for most writers – even best-selling authors. It is something that may never be overcome but anyone can learn to work with it and even use it as an advantage. What do Writers Fear Most of the fears relate back to a feeling of inadequacy and doubt in their abilities. Look for this type of emotion: Fear of failureFear of lack of creativityFear of looking foolishFear of exposing inner feelingsFear of wasting time and effortFear of having nothing to write aboutFear of commitmentFear of lacking basic writing skillsFear of criticismFear of success How to Handle the Fear of Writing The best way is to confront it. Don’t Become a Closet Writer These are people who write endlessly but never allow the words to see light of day. Don’t Give up Writing Rejection is part of a writer’s life. Think Positively Writers who dwell on rejections and writer’s block, lack of inspiration and criticism are filling their minds with negativity.