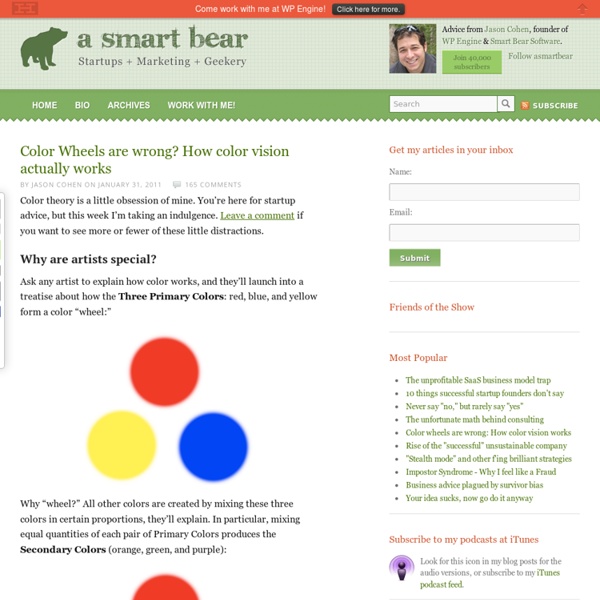 Color theory is a little obsession of mine. You’re here for startup advice, but this week I’m taking an indulgence. Leave a comment if you want to see more or fewer of these little distractions. Why are artists special? Ask any artist to explain how color works, and they’ll launch into a treatise about how the Three Primary Colors: red, blue, and yellow form a color “wheel:” Why “wheel?” Continuing this process produces the infamous color wheel you probably learned in school; a pretty, symmetrical, satisfying device in which each hue melds seamlessly and linearly into the next: Unfortunately, none of this stands up to even minor scrutiny. For example, open up your desktop printer and you’ll see something quite different: Three colors of ink which, when combined, produce all others: cyan, magenta, and yellow. But wait! Also it’s not as simple as saying “any three colors can produce all the others” because that’s clearly not true (by experiment). TVs and computers are different yet again. Related:  Sci/Tech

Clocks Metric (or Decimalized) Time The day is divided into 100 parts (centidays), plus decimal fraction. Think of it as a percent of the day. The "Universal Metric Time" is based on the International Date Line. Hexadecimal Time The day is divided up into 65536 parts and written in hexadecimal (base-16) notation (A=10, B=11 ... Much more information about this can be found at Intuitor Hexadecimal Headquarters. Octal Time Octal Time uses a base-8 system (digits 0-7). Base64 Time Base-64 uses ASCII characters (in ascending order: A-Z, a-z, 0-1, +, and /). Binary Time Like hexadecimal time, the day is divided into 65536 parts, only we display it as a binary number using squares for bits, here using dark squares to represent 1 and white for 0. This can be viewed as a variation of hexadecimal time by dividing it into four 2x2 blocks of squares, each block corresponds to a digit of hexadecimal time. Mayan Time

Create a realistic folded paper text in Photoshop Today we will learn how to realize a folded paper text effect from scratch in Photoshop. We will firstly create the background using a couple of patterns, then we will work on the type treatment with the help of the pen tool, layer masks and other useful techniques related to dodge,burn and the transform tool. This tutorial is very simple to follow, so I suggest to everyone to give a try. Preview: Click to enlarge Become a Premium Member and get unlimited access to source files and premium resources for only 7$/month. Step 1 Create a new document in Photoshop. *note for Mac users: ctrl=cmd, alt=option Step 2 Fill the background with a dark green (#41514c). Step 3 To create the textured effect of the background, I’ve used 2 of our soft grunge patterns created by Piervincenzo. Select the pattern2_380_hard and press ok to fill the background. Finally set the layer to overlay with opacity 50%. Step 4 Create another layer, this time fill it with pattern_9_380_hard. Step 5 Step 6 Step 7 Step 8 Step 9 Step 10

BELT DRIVE TURNTABLE Philips Thorens Verdier Melco Micro Mercure NOTES DIY Mr. Yamamura and the Melco Turntables A few years earlier, in 1981, I stumbled upon the Melco turntables which were for the first time on display in Paris. I had an interesting conversation with Mr. Yamamura. With his firm Belco in London he imported these heavy turntables which boasted of platters weighing which boasted of platters weighing up to 35 kg. Platter Damping and Constant Speed In the process Alexander and I had experienced all sorts of construction problems that needed specific solutions: damping, decoupling, mechanical and acoustical feedback, constant speed, etc.

Get Started With Photoshop – 15 Basic Detailed Guides Photoshop is a graphic editing program that is popular amongst all computer-users. This amazing software can work miracles on any element of graphics. Today, many people are fascinated by Photoshop, and would love to have the means to master it, however this could be a little complicated, especially if you do not have a logical and systemic information source. For beginners, its essential to have clear concepts of the basics of Photoshop, in order to master the more sophisticated features, without a hitch, later. And therefore, we bring to you the 15 Basic Detailed guides on mastering the basics of Photoshop that will enable to have clear concepts of the basics, as well polish your skills, in case you are already a pro. Lets have a look to get started with Photoshop with our Photoshop guides! If you liked this article and benfited from the guides in it, you may want to further improve your Photoshop skills through our tutorials on Photoshop Tutorials for Beginners. Article Link Layer Masks

Geometry of the Universe Can the Universe be finite in size? If so, what is ``outside'' the Universe? The answer to both these questions involves a discussion of the intrinsic geometry of the Universe. At this point it is important to remember the distinction between the curvature of space (negative, positive or flat) and the toplogy of the Universe (what is its shape = how is it connected). There are basically three possible shapes to the Universe; a flat Universe (Euclidean or zero curvature), a spherical or closed Universe (positive curvature) or a hyperbolic or open Universe (negative curvature). All three geometries are classes of what is called Riemannian geometry, based on three possible states for parallel lines always divergent (hyperbolic) or one can think of triangles where for a flat Universe the angles of a triangle sum to 180 degrees, in a closed Universe the sum must be greater than 180, in an open Universe the sum must be less than 180.

10 Enormous Numbers Technology One of the first questions that kids often ask is “What is the biggest number?” This question is an important step in transitioning to a world of abstract concepts. Ten to the eightieth power – a 1 with 80 zeros after it – is quite massive but somewhat tangible at least from a relatively concrete point of view. The word googol, with a slightly different spelling, has become a frequently used verb in modern times, thanks to a highly popular search engine. Mental Calculator Alexis Lemaire set a world record for calculating the 13th root of a 100 digit number, the 13th root of 8,192 is 2, or 2 times itself thirteen times, 100 digit numbers are googols, one of the numbers that Lemaire had calculated would have read (3 googol, 893 Duotrigintillion, ext, ext.) A Plank length is extremely small, approximately 1.616199 x 10-35 meters, or in long form 0.00000000000000000000000000000616199 meters. Poincare Recurrence Time Sorry, had to do it.